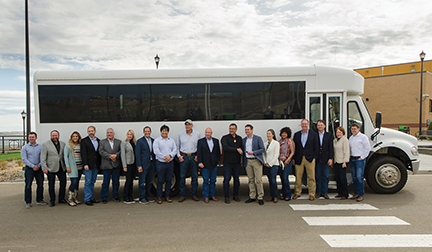 Executives and Board Members of Oasis Petroleum donated a new bus to be utilized by Parshall Fitness and Recreation at the MHA Interpretative Center on May 16. The bus will be used for youth sports and Elder transportation.

Chairman Mark Fox and Councilman Mervin Packineau spoke to the Board Members and Executives inside the Interpretive Center before the official gifting ceremony took place outside. Following the gifting of the bus, attendees were served dinner while special flute music was performed by Keith Bear. Guided tours were then given to the Executives and Board Members following the meal. This included a Cultural Presentation in one of the earth lodges located on the southern grounds of the Interpretive Center.

Councilman Mervin Packineau, who represents Fort Berthold’s Northeast Segment, thanked Oasis and welcomed everyone who was there in attendance. “The youth and the Elders are going to benefit from this which I really do appreciate. You know, with the kindness of your hearts and looking out for the people of MHA Nation. With that, I would just like to say thank you,” Council Packineau said to the Oasis Board and Executives that were in the room.

Chairman Mark Fox spoke to the group next. “Thank you for your generous gift. It’s very much appreciated. It demonstrates a lot, giving back, sponsoring communities, and things of that nature. Most of our oil partners do a good job– really find ways to help, and you’re amongst those as well,” Chairman Fox said referring to Oasis Petroleum.

He went on to explain the setting of the night’s event and the origins of the Interpretive Center. “Two years ago, if you would have stood here, it would have been nothing but a dirt clump. So, we built this facility, it’s an Interpretive Center, I’m very proud of it. We’ve even had one of the President’s Cabinet members come, one of our first guests here, the EPA Administrator,” Chairman Fox said. He also told the group from Oasis that the concept for the Interpretive Center began around twelve years ago. It took that long to get around the Army Corps of Engineers who had a recreational lease. “It wasn’t until about four years ago when I sat down with a Colonel from the U.S Army Corps of Engineers and he said we’ve granted your permit to construct. And away we went, and we built this Interpretive Center,” Chairman Fox said.

Chairman Fox gave the group from Oasis a history of the MHA Nation and a summary of the hardships his people have endured throughout history. Smallpox, military aggression, broken treaties, loss of lands and the inundation of a large portion of the Fort Berthold Reservation by the 1950s construction of the Garrison Dam were all explained to the group. The Chairman said it wasn’t until the early 90s that gaming was introduced and became one of the few economic engines they could use until energy development came along. “A hard choice had to be made about whether or not we would develop energy, and we did that,” Chairman Fox said. “Two thirds of all our oil royalty revenue produced on Fort Berthold goes to allottees or individual tribal members, and one third of that goes to the tribe. Eighty percent of our people receive very little to no income from oil and gas development. But what do they get? They get what we develop for them collectively,” Chairman Fox said. He went on to name all the new schools that have recently been built across Fort Berthold: Parshall, White Shield and Mandaree. He also mentioned the $40 million used for roads and road repair.

The Chairman also discussed the money appropriated to medical benefits for MHA members. “We spent $35 to $40 million so that our membership can have an insurance card to go see a doctor. That covers around 6,000 of our members who otherwise don’t have insurance.”

Chairman Fox elaborated on the distribution payments MHA members receive. “They’re basically economic payment plans to help people get by. They get $1,000 payments and with 17,000 members, that’s $17 million, and we do that three times a year. Plus, we help our Elders. There’s so many things that we do so that our people– and I can stand here as the Chairman and tell you this– so that our people benefit as a whole. Our tribal nation supports energy development, and we’re one of the few tribes in the United States that does that,” Chairman Fox said.

Following the Chairman’s speech to the group from Oasis, everyone was invited outside to witness the official presentation of the bus to MHA Nation.

At the end of the evening, the group was treated to a special Cultural Presentation in one of the earth lodges located on the southern grounds of the Interpretive Center. This was the first time any of them had experienced traditional Native American singing and dancing. 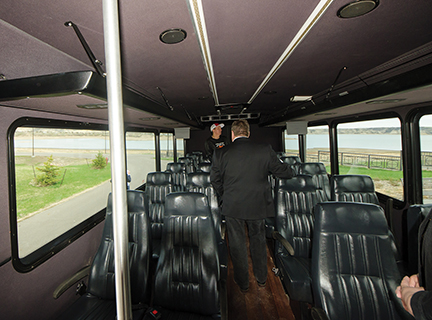 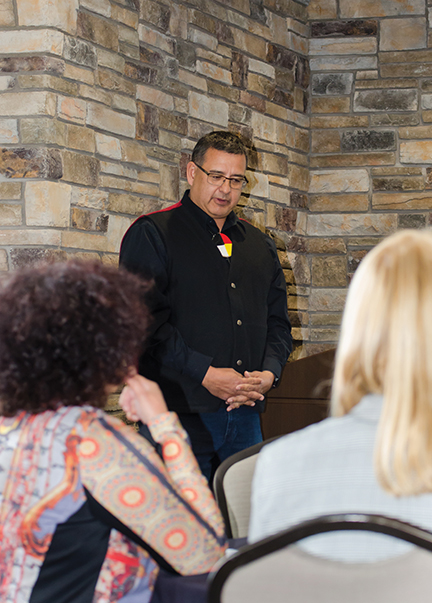 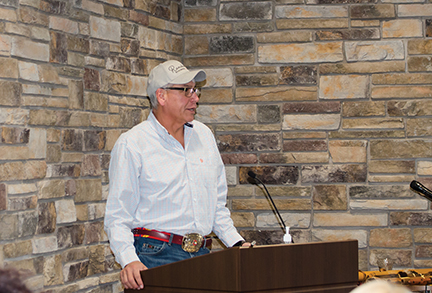 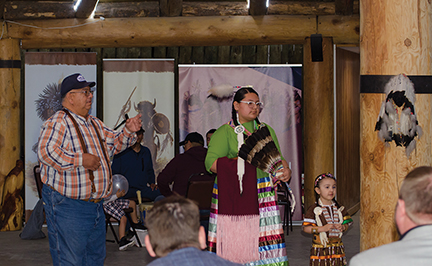 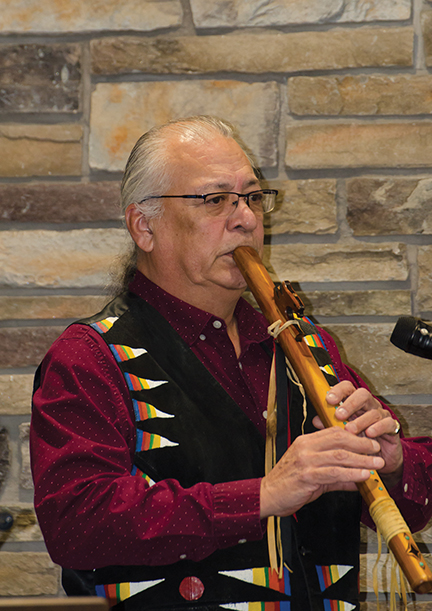