MHA Member Selected As Designer Of The Year

MHA member and Fort Berthold resident Norma Baker Flying Horse, founder of Red Berry Woman, was chosen among three designers as Designer of the Year in Phoenix, AZ on April 16.

Norma Baker Flying Horse, who grew up in Mandaree, ND and later graduated from New Town, has become a major force within 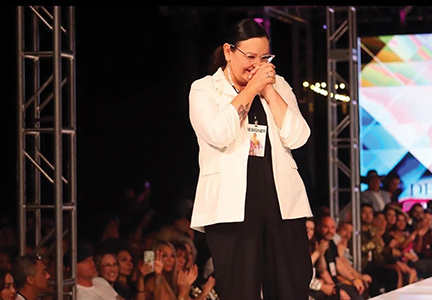 Photo of Norma Baker Flying Horse moments after her name was announced as Designer of the Year.

the fashion world. Prior to 2015 though, Norma was exclusively sewing and beading for her family. Since then, she has presented at Paris Fashion Week and has dressed attendees of the Grammys, the Indspire Awards, the Oscars, and other prominent award shows.

In 2015, New Town’s own Cheyenne Brady was named Miss Indian World at the largest and most prestigious pageant for Native American women in Albuquerque, NM. After receiving the title of Miss Indian World, Cheyenne reached out to her childhood friend Norma and asked if she could design a few dresses for some of her public appearances.  It didn’t take long for other people to notice Brady’s unique fashion choices and the talented artist behind it. Soon, Norma was getting inquiries from curious minds all over North America who wanted to know more about her designs. “It just evolved the more people began to hear about my work,” Norma said.

The year 2020 was an especially hard, but significant year for Norma. In the Summer, her infant daughter Cameron died four weeks after being born. “Those four weeks were torture and a blessing,” Norma said. “Losing her has changed life for me. She wasn’t given the ability to live life, so I promised her as she left that I would do my best to live mine best I could. It’s been difficult, but I’m finding my way.”

Early in the pregnancy, doctors diagnosed her with Trisomy 18, a rare condition that causes the organs to not fully grow. “It’s very difficult to determine what the outcome will be with each child, as the condition is still being studied and answers as to why and what causes it to happen are still unknown,” Norma said.

Towards the end of the same year, Norma was then let go from her full time job. Instead of trying to find another place of employment, she decided to run full force with her business. “It’s been the hardest but best decision I’ve made for myself. I don’t believe I would be doing this today had I not had the motivation to honor my daughter’s memory by building something she would have maybe one day run herself.”

Now, Norma Baker Flying Horse is the Phoenix Fashion Week Designer of the Year. Before taking top prize at Fashion Week however, Norma had to first be chosen to participate in the grueling three month designer bootcamp. “I had a friend reach out to me and encourage me to apply for the Phoenix Fashion Week Designer Bootcamp,” Norma said. “I was hesitant at first and honestly didn’t think I would get in. After being interviewed and my application screened, I was chosen as one of the four to compete in the program.”

The program helps new designers build their brand for their fashion lines. “We were required to do challenges which included a lot of homework that made us think about where we wanted to see our clothing line and ourselves. The program makes you think more about the business side of your designing like marketing, retail, manufacturing to name a few. I really hadn’t had this type of thinking when it came to my business. I’m learning as I go so this program really helped me to see that I wasn’t just making clothes, I’m building what I hope will be a legacy,” Norma said.

The bootcamp is a demanding three month program that challenges designers to not only sharpen their artistic and business skills, but to also learn how to multitask. “Between running a business, taking care of my family, and having to complete my assignments for the program, I was tired most of the time. Sleep has really become a luxury for me, but I’m going to take that as I must be doing something right,” Norma said.

As Norma stood on the stage with the other two finalists for Phoenix Fashion Week, the announcer quickly recapped each contestant before naming a winner. When Norma’s name was announced, she clearly had the loudest response from the audience. “I didn’t think I had that many supporters in the crowd until I heard the applause,” Norma Said. “Honestly it made me think, ‘Crap, if I don’t win, that’s a lot of disappointed people.’ So, thankfully I won. I would have hated to disappoint that many people.”

After being named Phoenix Fashion Week’s Designer of the Year, Norma won $10,000 and a promotion by Agency Arizona, a marquee modeling and talent agency. “I’ll be continuing to work with the Phoenix Fashion Week team to further my brand and my business, which includes vendors that are using the latest technology to manufacture clothing,” Norma said.

What is Red Berry Woman, and what does it stand for? “Red Berry Woman is a Native-owned fashion line that is influencing contemporary fashion with authentic Native American culture. We are honoring our ancestors of the Hidatsa, Dakota Sioux, and Assiniboine by remaining rooted in tradition with every piece we create,” Norma said.

When asked about the future of Red Berry Woman, Norma didn’t have anything specific to share, but she did have an optimistic outlook. “I’m not sure what’s next, but I know I will be continuing to grow and develop for as long as I am here, and hopefully this brand will continue to grow well beyond my time.”