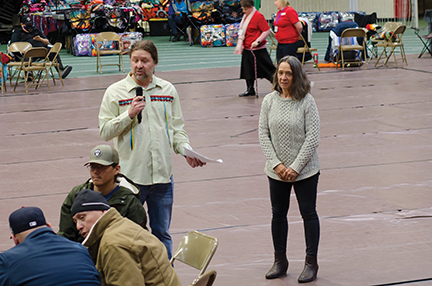 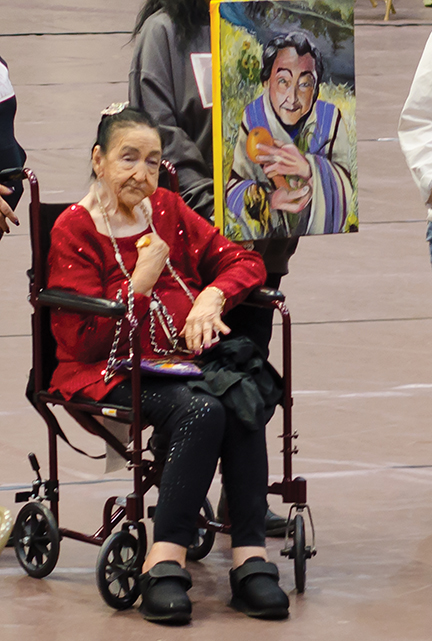 Carol with painting given by Virginia Conn

According to Minot State University Associate Professor Daniel Conn, the event was originally planned to be held in the Red and Green School, which is the community garden across from MSU, but the recent snow and cold temperatures forced organizers to hold the ceremony inside the MSU Dome instead.

Dr. AnnMaria De Mars was the first recipient of the award. She was the first American to win a gold medal at the World Judo Championships. She is currently CEO of 7 Generation Games and The Julia Group, as well as a statistical consultant and Native American activist. De Mars was also Vice President of Spirit Lake Consulting Inc. and was actively involved in the Tribe’s Education and Vocational Rehabilitation programs. She is also the mother of Ronda Rousey and María Burns Ortiz. Rousey is an Olympic bronze medalist judoka and former UFC Bantamweight world champion, and Ortiz is a sports journalist who serves as the social media columnist for ESPN.com and aNext to be honored was 88-year-old tribal member Elder of the Three Affiliated Tribes, Carol Bruh Lone Fight. Carol’s Indian name is Peppermint (Hish-oo-ish) which was passed down from her mother. Carol and her twin sister Colleen were born at Elbowoods, ND on September 24, 1933, to Buell and Margaret Fredericks Brugh. She grew up on the family ranch and farm south of Parshall, ND, in an area on the Fort Berthold Reservation known as Lucky Mound. The family was self-sufficient with their farming and ranching operations, for it was rare they bought anything from the store. Carol spent many years in the State of Washington living in the Pacific Northwest where she had her own garden in the backyard of her home.

Carol, who is the oldest member of the Three Affiliated Tribes living in Minot, was surrounded by several members of her family as she was honored for her many contributions.

MSU Associate Professor Daniel Conn said, “Carol was happy to hear about the Red and Green School’s Community Garden and was glad to be a recipient of some of the beautiful vegetables grown there last year.”

Daniel Conn, individuals with the Red and Green School, and Annette Mennem of the MSU Native American Cultural Center all worked together to organize the event. Daniel Conn’s daughter and MSU student Virginia Conn, also presented Carol Bruh Lone Fight with a painting at the ceremony.