An Estimated 17,000 Homes Without Power In

Another powerful storm system affected North Dakota over the weekend. From flash floods and tornadoes in eastern portions of ND, to strong winds and blizzard conditions over the west, the storm caused numerous issues for all residents of the state.

Unlike the last storm, which dropped around two feet of snow in the Fort Berthold area, the heaviest snow accumulations were confined to far western ND. This didn’t mean the storm was any less problematic for MHA Nation, however. As the storm continued to intensify Saturday, many areas around Fort Berthold saw a mixture of freezing rain and snow. The mixed precipitation helped keep snow amounts lower than the previous system, but it also created more complications than the usual travel hazards associated with winter storms.

Strong winds combined with accumulating ice on power lines caused widespread power outages over a large section of western ND, including Fort Berthold. Electric cooperatives across the area confirmed that 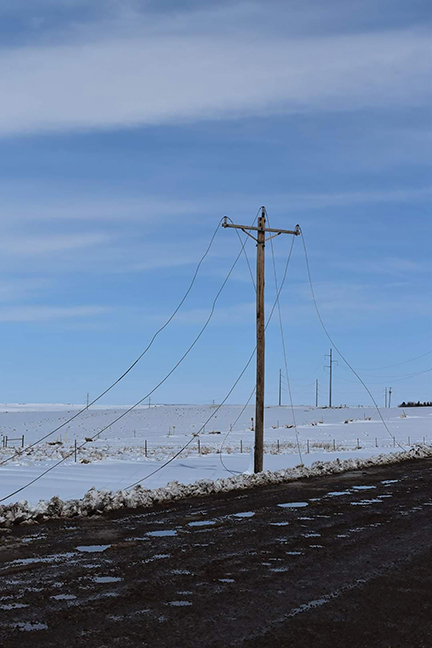 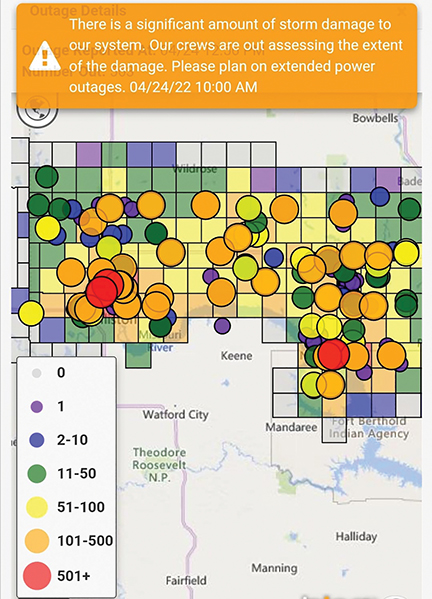 Outage Map from Mountrail-Williams Website as of Sunday Night

downed power lines had contributed to significant disruptions for large portions of their service areas.

The MHA EOC also informed residents who wanted to seek shelter and did not have nearby relatives or friends, to contact their office so they could coordinate transportation.

Things went from bad to worse as winds continued to increase and power lines and poles became more stressed from the weight of ice and snow. As reports of more downed power lines and outages came in, the various electric cooperatives began dispatching crews to assess and restore power where possible. As temperatures dropped into the evening, the mixed precipitation quickly changed over to heavy snow. It wasn’t long before roads and highways became impassable. Most of the highways in and around Fort Berthold were closed by Saturday evening, and the electric cooperatives were forced to pull their crews for the rest of the night.

By Sunday morning it was estimated that over 17,000 households were without power in western ND. Mountrail-Williams Electric released a statement on their website regarding the situation. “Power poles and lines are down all over our service area. Please be patient as our crews assess the damage and work out a restoration plan. Outages will continue for an extended period of time for many. We are coordinating with local city and county crews in Mountrail and Williams Counties. Stay away from downed lines or poles. Shelter in place as most businesses are closed as they are also without power as well.”

McKenzie Electric Cooperative also released an update to their members Sunday morning. “Line crews continue to restore outages where they can. We have reports of multiple downed lines and broken poles. Power restoration during winter storms can be a timely process. Understand that we are doing everything we can to restore your power and we are actively working with county plows and contractors to get to problem locations. Please reserve heat where possible and wear extra layers if you are without power.”

By Sunday afternoon, McKenzie County Cooperative had restored power to the Four Bears area, but around an hour later Mountrail-Williams Electric reported major outages in and around the New Town area. As of Sunday evening, power was still out in New Town. According to the Mountrail-Williams power outage map, thousands of households were still without power Sunday night. They couldn’t estimate when power would be restored but warned customers that extended power outages are likely given the severity of damage from the storm.