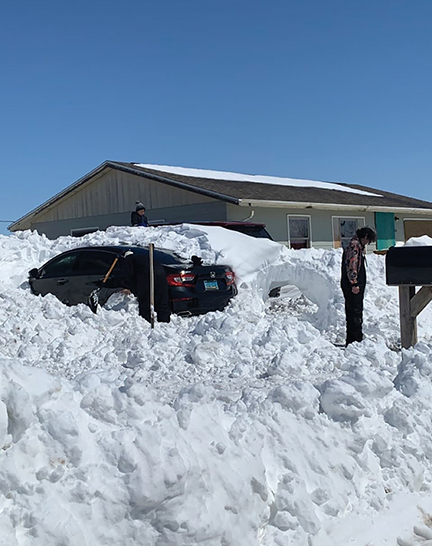 As a historic blizzard moved over North Dakota this past week, most residents were stuck in their homes unable to do much of anything until streets and highways were eventually cleared. More than two feet of snow fell over the Ft. Berthold Reservation, but that didn’t stop Twin Buttes teens 17-year-old Thomas Appel, 18-year-old Brandon Perkins, and 15-year-old Coulee Mossette, from taking matters into their own hands and helping their community with snow removal. 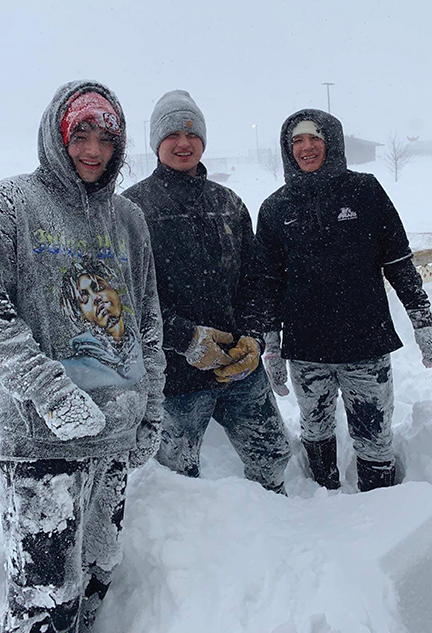 Charlotte Kazena Smith, mother of Thomas Appel, said the boys have been very busy. “They shoveled until after midnight Friday. They came home and ate, and were out again Saturday morning to dig out another vehicle.”

The teens aren’t using snow-blowers or machinery, just muscle and a few shovels. A post on the Twin Buttes Facebook group page advertised their services. Charlotte says the boys have received a lot of requests since that post, but given the amount of snow, individual jobs have taken hours to complete. It took over five hours to dig out one vehicle that was buried in several feet of snow. The requests didn’t just come in from Twin Buttes. Many people contacted the teens asking if their services were available in other communities like Mandaree. Unfortunately, they had to turn down jobs that were outside of Twin Buttes. With even more shoveling jobs coming in by Saturday, Thomas Appel said they recruited two more guys to the crew, 20-year-old Joey Appel Sr, and 17-year-old Red Sky Starr.

Thomas says things are winding down now. They went out again Easter morning to dig out a few more vehicles, but will probably take some time to rest now. “We’re getting pretty sore,” Thomas said.

When asked about what gave them the idea, Thomas said, “We just wanted to help people in need, while also earning some money to move to California.”

In all, Thomas says they have completed around nine jobs since Tuesday, all ranging from one to five hours to finish.

Brandon and Thomas are planning on moving to California on May 1, and all the hard work they have put in this past week will help in making those plans a reality.