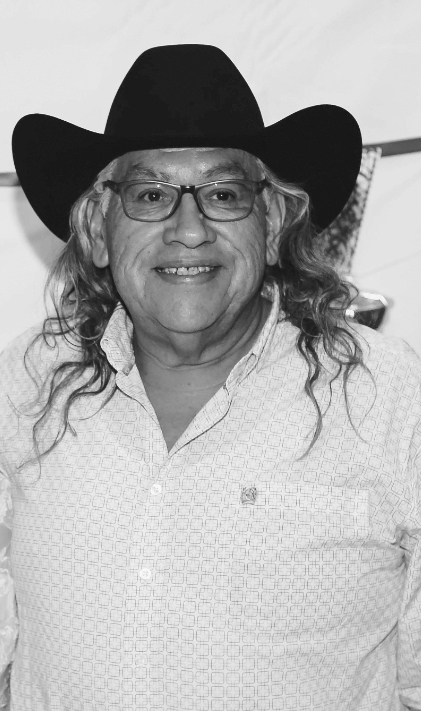 A friend to many. An open hand to the broken. A loving father. A dedicated Papa. James “Pete” Hale, 65, New Town, passed away on Monday, April 4, 2022, in the arms of his children.  James Peter Hale (Holy/Sacred Leaf)  “Mira’aba Xuba’a”  was born on September 22, 1956, in Los Angeles, California, the son of Millard and Irene (Bluestone) Hale. He was raised on the Fort Berthold Indian Reservation, until attending boarding school from a young age. He graduated in 1976 from St. Mary’s High School in New England, where he was a standout athlete in football, basketball, and track. During his younger years, he enjoyed Rodeo as a steer wrestler. He also traveled the country playing basketball with many close friends for several years.

Pete was blessed with five children, three born from his seventeen-year marriage to his high school sweetheart. His children were the most important thing in the world, but his grandchildren were the air he breathed, filling his heart with new life. Through the years, Pete lived and worked in several places throughout western North Dakota and the United States. From oil rigs to the Buffalo Project, to truck driving, to finally landing at Thunder Butte Petroleum Services, Inc. Pete embodied the definition of a hardworking man. He was also so proud to serve his community as the Mandaree Tribal Council Representative for several years.

Pete was a talented fisherman and enjoyed hunting, golfing, and pontooning with his family and friends. He was an excellent cook and loved listening and dancing to his favorite country music. It wasn’t uncommon to find Pete visiting the local YMCA to “have a good sweat”. He had a traveler’s heart, always on the go, meeting new friends along the way, lending a hand to anyone that asked or needed help, even if it meant that he went without.  Pete cherished his family and his grandchildren and was loved until the very end. He will be truly missed.