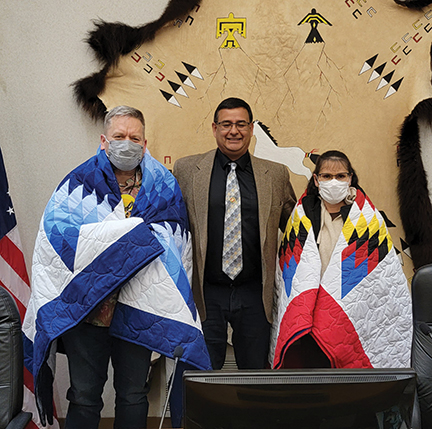 Chairman Fox began the call to prayer by addressing the listeners “On behalf of the MHA Nation, Tribal Government, and I as the Chairman- I have asked to put together, with the assistance of my PR Director here, a prayer day, basically, a prayer afternoon, a prayer event.” He then explained why March 25th, 2022 was the chosen date as it was the “closest day, workday, to the two-year anniversary to our exposure to the Covid Pandemic.” Chairman Fox began by sharing data and then turned the floor over to two spiritual leaders from the community. He shared a summary of the steps taken to protect the MHA Nation in the past two years, including extra care for the elders, distance learning for students, and social-distancing business practices.

Pastor Bob, began with a prayer which included the following words. “As we are, at this time, enjoying a reprieve from the virus, we have to remember that the virus is not just a physical thing, but it also has the attributes of an evil spirit. So, we turn to the one who has made us, the one who has died for us, and the one who gives us peace,” said Pastor Schmidt.

Minister Barb told a story that explained that sometimes God is present when we do not realize it.

“There was a man who was stranded on his rooftop because of a flood, and he prayed and asked for God, ‘God, save me! Save me!’ Then, the next thing he knew, along came a rowboat. The guy in the rowboat said. ‘C’mon, jump in! I’ll save you!’

While he was sitting there, along came a motorboat and the man on the motorboat said, ‘Get in! Get in, I can help you, I’ll save you.’

So, the guy on the motorboat said, ‘Okay,’ and he left.

Later on, here come another man. But this was a pilot and he was in a helicopter. He let down a rope and he said, ‘Climb the rope! I’ll save you!

But the man said, ‘No, that’s okay. God’s gonna save me. I have faith.’ So the pilot said, ‘Okay’, and flew off. After a while, the waters rose and kept rising and rising and the man drowned.

And God said, ‘I sent a rowboat, I sent a motorboat, and I sent a helicopter, what more did you want?’ But the moral of the story is, when God gives us so many opportunities and chances, he gave us the gift of prayer, so that we can come before him and we can ask him, give our requests to him…”

The floor was given back to Chairman Fox who explained how prayer is how the MHA Nation has and will overcome the virus. “We are a very spiritual people; we are people of God. And during the dark and difficult days, days of fear and apprehension, days of undue influence from the outside: our people prayed, our elders prayed and our leaders prayed and everyone turned to God and we put our faith in God that we would be okay.”