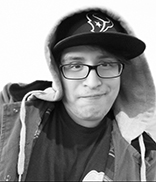 Joseph James Henry (Uugagai Awashiish) was born on May 28, Chad Johnson Jr. was born September 3, 1991, in Minot North Dakota to Yvette Everett and Chad Moran. He was nicknamed Nooner because his younger brother, Payne, couldn’t say Junior. Nooner was the oldest and was born to be a big brother. He was more than just a big brother; he was their best friend; he took this position very seriously and loved them all very much.

He attended Head Start in Parshall, where his big personality shined. He also attended grade school in White Shield and Parshall. He earned his GED and continued his education at Nueta Hidatsa Sahnish College, in New Town. He left a mark on everyone who came across him with his funny jokes and ability to make everyone he met laugh.

Noon had a kind heart and would help anyone in need. He was always willing to try anything once when it came to sports. He enjoyed boxing with his dad, playing basketball with his uncles yelling “Miller Time”, and baseball with his cousins. His favorite team was the Golden State Warriors, but his true passion lay in music. He had the best taste in music always finding the perfect song for any mood you were in. He would spend hours in his grandparent’s basement listening to music. He fancied himself the next Slim Shady.

He was a loving son and grandson who spent most of his time helping his mother and grandparents. But the title that he held most dear was “Husband” to Alvina and “Father” to Rage and Klash. He loved Alvina “Keisha” and was so proud of finding such a beautiful, smart woman; they were married on August 25, 2015.  He was never happier than when he was with his family. He loved to play with his boys, playing action figures or singing songs to them. He also loved to match outfits with his boys so that everyone knew they were a family. One year he dressed the whole family up in Ghostbuster Costumes. When Rage was first born Chad was so protective over Rage, Payne and Cierra called him “mother hen”.

On Tuesday, March 22, 2022, Chad Johnson, Jr. passed away at a Minot hospital. Nooner had many cousins, aunts and uncles who loved him dearly and who will miss him.

His wake was held Friday, March 25, 2022, beginning at 5 p.m., at Ralph Wells Memorial Complex, White Shield with his funeral on Saturday, March 26, 2022, at 11 a.m., at the memorial complex. His final resting place is at Everett Family Cemetery, White Shield