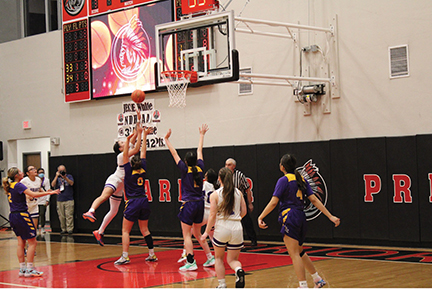 Teams travelled back and forth to White Shield each day. Trenton got a BYE in the first round, which automatically 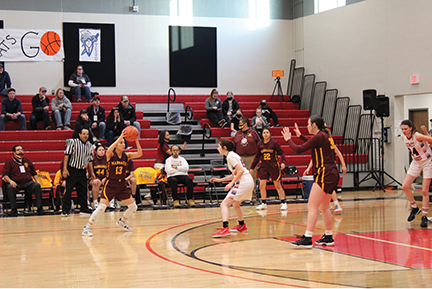 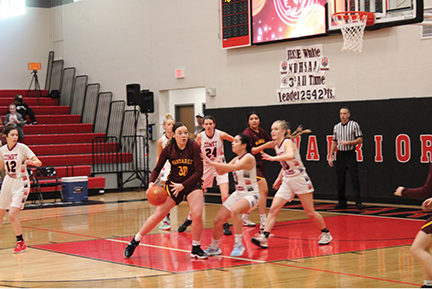 advanced them to the second round of games on Friday. In game one on Thursday, the Parshall Braves came out with a win over the Williston-Trinity-Christian-Alexander Crusaders. In the next game, the New Town lady Eagles advanced on as the winners against the White Shield Warriors. In the final game of the first round of girls’ districts, the Mandaree Warriors won against the Lewis and Clark North Shore Wildcats.

On the second day of districts, the Trenton Tigers, who had a BYE the first round, were beat out by the Parshall Lady Braves. White Shield and North Shore Plaza went head-to-head, with NSP advancing on to the third round as winners. New Town and Mandaree played the last game on Friday night, with New Town advancing on to the final round.

The final round of girls’ district 15 basketball was jam packed with support, competition, and fans cheering. In game one, the WTC/A Crusaders stayed close with the Mandaree Warriors throughout all four quarters of the game. In the end, the Mandaree Warriors won against the Crusders with a score of 66 – 51. The second game featured North Shore Plaza Wildcats against the Trenton Tigers, with Trenton coming out on top.

As the championship game got nearer and nearer, the bleachers began to fill with more and more people. The stands got so full, that people had to stand and watch from the hallway. The championship game featured the Parshall Braves and the New Town Eagles. It was a close match against the two teams. At the end of the first quarter, the Lady Braves were up by one point 19 – 18. After some strategizing by both teams throughout the second quarter, the Eagles were up by 7 at half time 39 – 32. The Lady Eagles kept up that momentum and their score kept sky rocketing throughout the third quarter. By the end of third, New Town was by 22 points with a score of 61 – 39. The crowd was going wild in the stands for both teams. Fans were standing and cheering throughout the game. In the end, the New Town Eagles became the district 15 champions with a score of 79 over the Parshall Braves (54). New Town, Mandaree, and Trenton will advance to the Girls’ Region 8 Basketball Tournament February 21-24.

Tournament Director Sheldon Rush, who is also the Athletic Director for White Shield, commented that the overall tournament went “extremely well”. It was the first time White Shield hosted a girl’s high school basketball tournament. The boys hosted districts three years ago. Although teams had to drive back and forth, it is something that is common for every town that lives within district 15. Rush would like to give thanks to the White Shield school board, staff, the East Segment community, local police departments, security, Ladies Auxiliary Post 253 and Young Hawk Bear Post for the hospitality room, and Councilman Fred Fox and his staff for coming together to host a great tournament. The community really came together and Rush looks forward to future events that White Shield can host or get involved in.

*Official scores will be posted online at mhatimes.press and kmharadio.org, as they were not yet available at the time this article was submitted