NORTH DAKOTA COUNCIL on the Arts 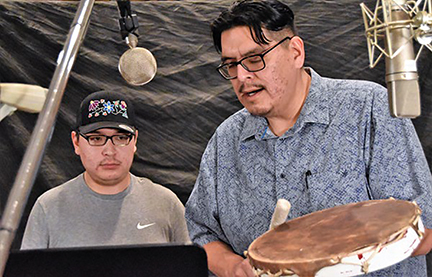 Cody Wasinzi (left) and Courtney Yellowfat rehearse a song recorded 110-years-ago by a Standing Rock elder. Yellowfat is the primary cultural advisor and co-producer of the “Densmore/Lakota Song Repatriation Project.” The goal is to re-introduce the songs and make them more accessible to a new generation of Lakota singers.

One-hundred-ten-years-ago on the Standing Rock Indian Reservation, Red Weasel, a respected Lakota elder, conferred with his peers. They solemnly discussed whether to allow the recording of ancient, sacred Lakota songs. After much deliberation, they agreed. Red Weasel then said a prayer at the beginning of the recording saying, “May our voices be heard at the future goal you have prepared for us.”

Red Weasel sang four songs for famed ethnomusicologist Frances Densmore of Red Wing, Minnesota. On numerous trips to Standing Rock between 1911 to 1914, she met and recorded more than three- dozen men and women singers, documenting hundreds of songs, and gathering notes for her book, Teton Sioux Music. The book documented her work in precise detail, and became a touchstone for learning about Lakota culture. Using technology of the early 20th Century, she preserved over 270 songs at Standing Rock with an Edison wax cylinder recorder. The bulk of the Densmore collection is stored at the American Folklife Center at the Library of Congress in Washington, DC.

Densmore’s work at Standing Rock is now the subject of a revitalization project to help make those ancient voices heard today. The effort is supported by North Dakota Council on the Arts (NDCA) with a $208,000 grant from the Bush Foundation, and Dakota Legacy with a $50,000 grant from Humanities North Dakota. Standing Rock Community Schools, Sitting Bull College and United Tribes Technical College are also involved.

“It just makes my heart feel good that these songs were recorded and documented over 100-years-ago are seeing the light of day again,” said Courtney Yellowfat, a Standing Rock educator and traditional singer. “Those recording artists were our grandfathers and grandmothers who freely shared the music they knew and the cultural context. They took these songs, our religion, our spirituality and our language underground, in order for us to have something today.”

David Swenson, the project’s executive producer, notes that, “until 1978 it was illegal for many Native Americans to even practice their own religion or sing these songs. Repatriating these songs is an essential part of correcting that.”

Yellowfat has involved traditional singers to re-record the songs and tribal elders to help interpret the culture of the time.

“It’s so healing when I can pass these on to my singers and they’re writing back: ‘Man that’s an awesome song! Did you read the story behind that song?’” Yellowfat said.

Cody Wasinzi (left) and Courtney Yellowfat rehearse a song recorded 110-years-ago by a Standing Rock elder. Yellowfat is the primary cultural advisor and co-producer of the “Densmore/Lakota Song Repatriation Project.” The goal is to re-introduce the songs and make them more accessible to a new generation of Lakota singers. 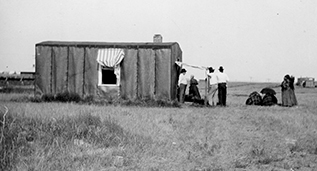 The project’s goals are further restoration of the original recordings, re-recording selected songs with contemporary Lakota singers, and making them accessible to Standing Rock Tribal members. The songs offer a range of subjects and themes mirroring Lakota life. They include ceremonial and healing songs, honoring songs, war songs, hunting songs, and sacred songs.

Native American students are being trained to interview and record Lakota elders to capture the cultural context of songs.

In a step Frances Densmore would approve, the songs and interpretation will be distributed on the latest technological platforms, including websites, touch-screen monitors for schools and powwows, and cell phones and thumb drives for pocket access.

Listening to the old recordings today, the vocalizations of long-ago spring rhythmically to life, introducing with profound intimacy the voices of real people who carried the culture in their being, and whose descendants are still living in Standing Rock.

“When I first became aware of these recordings, I discovered they’d been archived incorrectly at a much slower speed,” said David Swenson, who spotted the transfer error in the 1990s and wrote a technical paper about it.

Swenson likens the sound quality to looking out a dirty window, “you can see part of the view outside, but some sections are cloudy, making it difficult to capture the entire scene.” 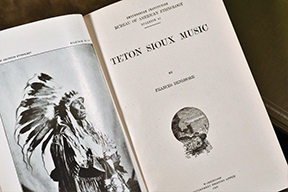 Delivering the sound and cultural context of 100-to-200-years-ago into the hands and hearts of people in the community where it originated, made a compelling case to the granting entities.

“It’s inspiring to see that these songs won’t just be housed at the Smithsonian,” said Ramla Bile, the Bush Foundation’s grant-making officer. “They’ll be catalogued and used in schools, made available at powwows, and learned by a new generation.”

Frances Densmore’s connection with tribal communities was only just beginning when she went to Standing Rock in 1911. During a career that lasted into the 1950s, she worked with upwards of two-dozen tribes around the country, recording their music and documenting the culture around it in nearly 20 pamphlet and book-length publications.

“This will establish a blueprint for future repatriation projects with other tribal communities,” said Bile. “It will help to address the issue of ‘cultural gatekeeping’ that has left tribal communities feeling erased in the past.”

Humanities North Dakota considered the Densmore project very worthy to fund. “It’s incredibly moving to see new generations engage with these songs, giving them a new life,” said Brenna Gerhardt, the group’s executive director. “For too long, First People’s history has been neglected. This is a step in the right direction.”

The executive director of the North Dakota Council on the Arts says it’s a wonderful project. “This will impact many and be deeply felt,” said Kim Konikow. “The council is proud to be involved.”

The state’s folklorist summarized it this way: “An elegantly simple yet crucial part of the project involves making a touchscreen monitor available to the extensive Lakota singers and powwow circuit,” said Troyd Geist, State Folklorist with the North Dakota Council on the Arts. “The established cultural network of traditional singers and storytellers will be able to access the original songs cleaned-up, the re-recordings of those songs by contemporary traditional Lakota singers, along with cultural context information from elders. With their smart phones, they can download audio files and share them freely, bypassing previous hurdles to access.  It is a real honor to be involved with this project.”

The Densmore/Lakota Song Repatriation Project is expected to be completed in summer 2022.

The Densmore/Lakota Song Repatriation Project is supported by a generous Community Innovation grant from the Bush Foundation. It is made possible also by funding from the National Endowment for the Humanities and the federal American Rescue Plan Act, in partnership with Humanities North Dakota. Further support is provided by the North Dakota Council on the Arts, which receives funding from the state legislature and the National Endowment for the Arts, and Dakota Legacy.

Before singing, Red Weasel bowed his head in prayer, “Wakan’tanka, hear me. This day I am to tell your word. But without sin I shall speak. The tribe shall Live. Behold me for I am humble. From above watch me. You are always the truth, listen to me, my friends and relatives, sitting here, and I shall be at peace. May our voices be heard at the future goal you have prepared for us.” From Teton Sioux Music & Culture by Frances Densmore