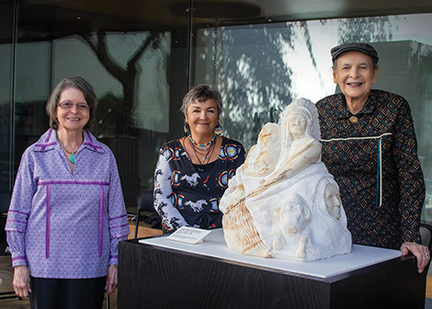 Like Wayne, Elk Woman’s father is a member of the Flint Knife Clan, and, therefore, Kathy is Wayne’s Clan niece.

Wayne and Marie Mitchell have long been associated with the Heard Art Museum.  Their very first date was at a Heard exhibit opening.  Also, Wayne served on the Heard’s board of trustees for many years, first as a voting member, and currently as a life trustee.

Because Wayne and Marie were associated with the Heard for so many years, they wanted to leave a meaningful legacy to the museum.  They knew of Elk Woman’s splendid reputation, so they knew she could create a meaningful sculpture for them.

The sculpture is titled “Honor The Treaties.”  Marie suggested this theme because it carries so much historic importance.

Treaties rest at the heart of American Indian history.  Between the years 1771 through 1868, approximately 375 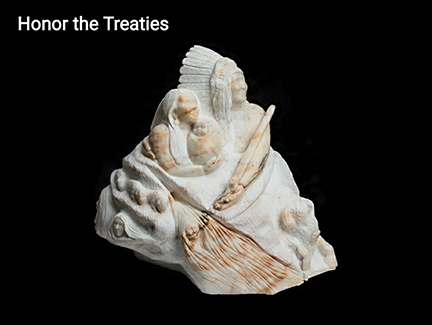 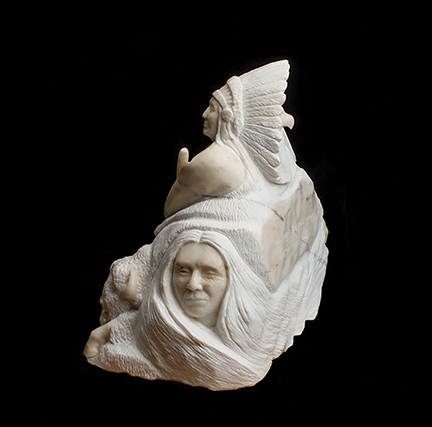 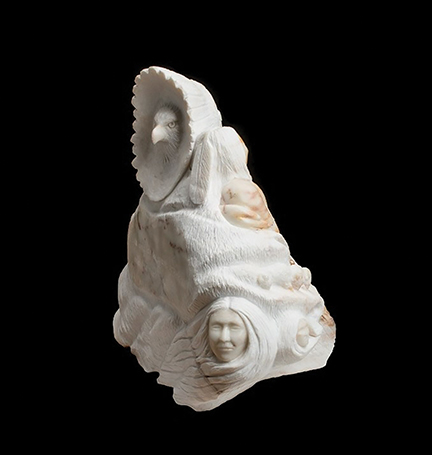 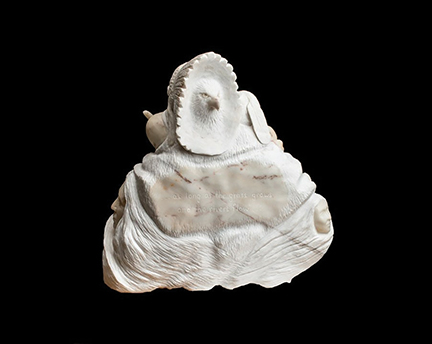 treaties were signed between Indian tribes and the U.S. Government.  These treaties document promises the US Government made to Indian people.

In 1817, President James Monroe promised Indian people … “You will be protected on either side; the White shall never encroach upon you and you will have a great outlet to the West … as long as water flows or grass grows upon the earth or the suns rises to show your pathway, or you kindle on campfires … so long shall you be protected from your present habitations.”

When Andrew Jackson became president in 1829, he continued the string of broken promises towards Indians.  Jackson will always be remembered by Indian people as the signer of the Indian Removal Act, resulting in the Trail of Tears.  He will always be known as “the Indian killer.”

Through the years, most treaties with Indians have been violated in some way or outright broken.  Treaties caused tribal land loss, as well as tribal removal.  Because so many treaties were broken, many people believe that if the US Government wanted land, it just drew up a treaty for “appearances” sake, and then took the land.

In the present day, Indian treaties are being examined to see if some government commitments can still be realized.  These efforts have brought about a resurgence in Indian treaty rights in recent years, with the U.S. Supreme Court delivering historic decisions favorable to Indians in treaty cases in 2019 and 2020.

Elk Woman was able to create the white marble “Honor The Treaties” sculpture with her following depictions:

.  Head of a Buffalo, with 4 other smaller buffalo on the sides of the sculpture

.  Eagle behind the warbonnet

grows and the rivers flow …”

Elk Woman’s sculpture also speaks to the future of the U.S. Government’s relationship with tribes.  It is a reminder of the obligation to ensure that present and future generations of Native voices are celebrated and lifted up.

Marie and Wayne donated this sculpture for people to enjoy, but also for viewers to ponder what the title and the inscribed words mean to each individual, Indian or non-Indian.  While art is beautiful, it can also be inspirational and influential.  This sculpture is a reminder that we must always honor those who have come before us.

The sculpture unveiling took place on November 18, 2021, the month being celebrated by the Phoenix Indian community as National Native American Heritage Month.  Approximately 60-70 people attended the event, including representatives from the Arizona State Legislature and the office of U.S. Senator Mark Kelly.  Additionally, Michael Crow, President of Arizona State University, sent a letter of congratulations.  Marcus Monenerkit (Comanche) offered a blessing and Alvis Robertson (Sisseton Sioux) sang and drummed an honor song.  The ceremony was captured on video for Indian Country Today.

We should always remember a quotation from Lakota spiritual leader, Crowfoot, who said:

“Hold on to what is good

Even if it’s a handful of earth.

Hold on to what you believe

Even if it’s a tree that stands by itself.

Hold on to what you must do

Even if it’s a long way from here.

Hold on to your life

Even if it’s easier to let go.”

Elk Woman created “Honor The Treaties” with love and said that the Creator guided her from above.  Elk Woman has blessed us all with her beautiful work of art.