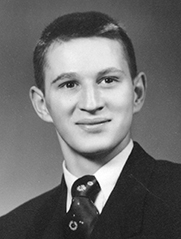 Edward Solstice Danks Sr. “Solly” was born December 28, 1933, in Elbowoods, to Maurice and Clara (Hall) Danks. He was a member of the Dripping Dirt Clan and was the second youngest child in a family of eight. He was raised in Elbowoods and attended Elbowoods High School where he participated in football and graduated in 1952.  During his youth, he was active in 4H, enjoyed ice skating at the Elbowoods ice rink, and learned to box from his big brother Richard Crowe who was a professional boxer.  Solly’s biggest passion was in rodeo.  Following graduation, he joined the US Marines Corps during the Korean War but was discharged due to hearing loss.

On June 8, 1955, Solly was united in marriage to Georgianna Bruce, in Watford City. They made their home at the old Simonson’s place by Table Butte where they lived for several years before moving to Clarks Creek. They were blessed with five sons and three daughters. Solly was a rancher and worked hard. He retired from ranching after 65 years. His brand was “rafter one eleven”, also known as “the shit house”. For many years he roughnecked in the oil field for extra income.

He was a member of several rodeo associations from the late 1950s to the early 1970s. His events were bareback, saddle bronc, and bull riding. He was the first rider out of the chute at the White Earth Rodeo grounds and went on to win the All-Around. He rode in many local rodeos including at White Earth, Blaisdell, Fargo, and Grand Forks; in Texas with Mervel Hall and Calgary Stampede with Joe Chase. He was seriously injured in a couple of rodeo wrecks once in Bel Fouche, SD and later in Blaisdell, ND, which ended his rodeo career. He worked in the oil fields in North Dakota from the 1960s to the 1980s.

Solly was always involved with the local community and ranching organizations. Along with being a member of several rodeo associations, Solly was also a life-long member of the Ft Berthold Land and Livestock Association serving several terms on the Executive Board.  He also served nine years on the New Town School Board and was an active member of the Dakota Resource Council.  Solly was also very active in tribal, state, and local politics. Never one to back down from a good argument; Solly was proud of his victories in litigation with the BIA and the Department of Agriculture in federal court. He was a staunch defender of our ranching and cultural ways and proud of his native heritage.

He was especially proud of his role in bringing the Department of Housing and Urban Development programs to Ft. Berthold. His uncle, Jim Hall, was on the tribal council and asked him to host a visit by Phillip Nash and Sergeant Schriever from Washington D.C. They met in the one-room log house that he built and shared with his family of six children. He was a good neighbor to all the ranchers in the area, always willing to lend a hand or help working cows. He was one of the first ranchers on the reservation to use artificial insemination for his herd of Simmental cattle.

Anybody that knew him; knew he had a sweet tooth. He liked his sugar with just a little bit of coffee…something Georgianna could never get him to cut back on. His grandkids often used to sneak into his closet to steal Salted Nut Rolls, one of his favorites. He liked to sing old country songs in the pickup or while doing the chores. He liked to sing Indian like nobody was watching, slapping his leg with his handy fly swatter while watching the road from his bay window at Clarks Creek Ranch. As a rancher, Solly was well known for raising good pail calves. He had a secret pail calf recipe which he would never share. His favorite saddle horses were Skeeter and Cocoa. He was close with his oldest brother, Quentin Crowe in Montana. He used to say the Crows are back and then his brother would just show up.