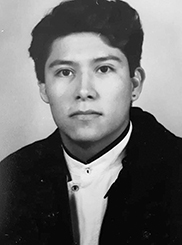 (First One to Charge)

His wake was Friday, October 22, 2021, at Northern Lights Community Center, New Town with his funeral held on Saturday, October 23, 2021, at 10 a.m. Burial was at Holy Family US Scout Catholic Cemetery, Shell Creek/New Town

Enos Baker is serving as the Senior Pallbearer

In the early winter morning on January 22nd, 1972, Lance Medicine Crow was born at home to Kathleen Simpson (Washoe) and Cletus Medicine Crow (Hidatsa Waterbuster) in Chicago, Illinois. At the age of 5, he was brought into the circle as a fancy dancer at the Little Shell Powwow, where his song was made and sang by Rocky Boy Singers from Rocky Boy, Montana. As a little boy, Lance was beloved by his grandmother Grace Medicine Crow, and her many children and grandchildren. He was a bold, fearless, and brave child. He would do things like balance himself on a 10-speed bicycle, feet barely reaching the pedals, starting at the top of Dragswolf and going straight down the hill to fly off a jump made from a piece of plywood with concrete bricks for support or loading himself and brothers into a Radio Flyer Wagon and launching them off the edge of a cliff behind their grandmother’s house. He could see into the spirit world and not be afraid.

On a stormy summer night, his Dad Cletus overheard him talking with Beau and Cloud when they were supposed to be in bed. When he opened the door, they were standing at the bedroom window with the wind and rain blowing in, lightning crashing outside. He said, “What are you boys doing!” Lance replied, “We’re watching the buffalo run”. “Oh, Do wall A Go To Bed!” he yelled. He loved to run free in the village with his brothers in tow behind “their Hill” at Grandma Grace’s house stopping to pick chokecherry and a few wood ticks along the way that Grandma Grace would have to pluck out later. He loved running through the grass and bluffs along the river with his brothers in tow. It was on one of these hot summer afternoons he led his brothers down the bluff to a little cave. After crawling in one, Lance put his good ear to the ground and said, “listen!” they got on the ground and could hear the beating of a drum under the earth, then Lance said “run!” and they high tailed it back to the village leaving little Cloudy in the dust. It was because of these qualities he was given his Indian name “Thoka Natan” First One to Charge, by the late Frank Fools Crow from the Oglala Lakota Nation.

Despite having been born with one undeveloped ear and was partially deaf, Lance learned to speak Hidatsa and Lakota fluently while spending time with his Grandma Grace in Dragswolf Village. He loved to sing Indian, dance, and beat on a cardboard box with his brothers. He loved practicing karate (what he learned from watching Bruce Lee movies and Kung Fu Theatre with the late James “Jim” Bear), on Beau and Cloud. He was a gifted and champion artist and earned many awards in drawing and painting.

His Indian name would continue to echo through elementary school to high school and manifest in basketball, football, baseball, and wrestling. Lance attended Douglas High School where he made varsity basketball and football his freshmen year. He made the All-Star team and was invited to play in the Bahamas. By the time he was a senior he was a part of the Striker and Headhunter squad of the Douglas Tigers Football team that awarded player stickers they wore proudly on their helmets for an outstanding helmet shattering hit on an opposing team. He played linebacker, fullback, and running back in football, point guard in basketball, and pitcher in baseball.

Lance also played football for one year at Sherman Indian High School in Riverside, California with his brothers. It was there that he met his best friend and the love of his life, Lagrada Smith (Dine’). They married in the fall of 1992, at the Washoe Tribe of Nevada and California. Soon after they had their first daughter Feather Grace, followed by Abby Jane, Isaac, Layhton, and Jael Medicine Crow. Lance and his family lived in many places throughout the years beginning in Nevada, Arizona, Dragswolf, California, Hardin, Montana, and finally settling in Dresslerville, Nevada…the heart of the Washoe Tribe of Nevada and California where his mother is from. Lance was baptized by Father Charley at St. Xavier Catholic Church in St. Xavier, Montana along with his five children. He was a member of Saint Dennis Catholic Church in Crow Agency, Montana.

In 2016, he began his long battle with kidney disease and after many tests, it was discovered he had been born with an enlarged heart. It was his grandmother, Grace, who knew from his birth that he was special and that he was not like all the other grandchildren, so she gave him all her attention and unconditional love. Lance’s Indian name would stand true as that did not stop him from carrying on his greatest joy which was raising his children and grandchildren and being present as a grandfather, dad, son, brother, and uncle.

Lance believed in Jesus and raised his children in the church and the word of God. Lance firmly believed in the grace of God and forgiveness as he knew he too, was stubborn and difficult during his life. He loved all his family both on his mother’s side and his father Cletus’s side. Lance was a man of few words but when he did speak, he meant every word especially in his daily prayers for friends and family far and wide. He believed in Proverbs 10:12 “Hatred stirreth up strife: but love covereth all sins.”