State and Tribal Forces Combine for a “Brighter, Safer Future” 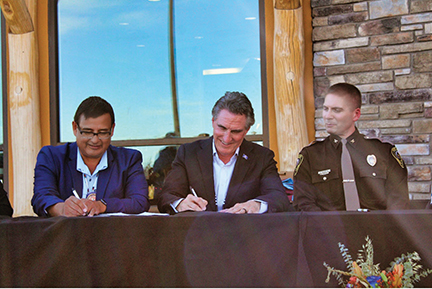 Laws are intended to provide safety while protecting the liberties and rights of citizens, however these laws pose complexities in jurisdiction when it comes to sovereign nations such as MHA and other Native American tribes throughout the state. These complications in law have posed a delay for law enforcement personnel when they are called in an emergency situation. On October 4, 2021, this will change as MHA Nation along with Governor Doug Burgum, and North Dakota Highway Patrol Colonel Brandon Solberg signed a Memorandum of Understanding between TAT Law Enforcement and North Dakota Highway Patrol. 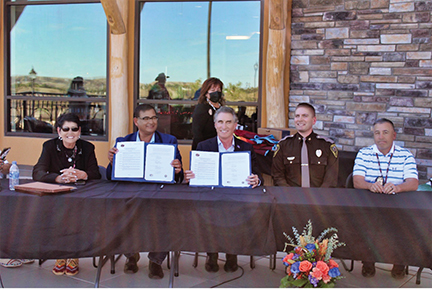 It was a momentous occasion for both the state and tribe, as they officially combined their resources to better protect and serve the people of North Dakota.

This agreement will combine state and tribal resources to further protect and serve the people. Whether it be enrolled, non-enrolled, or visitors travelling throughout North Dakota; everyone is ensured quick, professional service from law enforcement personnel. MHA Nation is the largest reservation within North Dakota, it spans across six different counties. Each county has its own jurisdiction, along with city ordinance, and with the tribe’s sovereignty combined; it has imposed many issues for law enforcement over the years. Governor Doug Burgum mentioned instances in the past five to ten years of citizens calling 911 for help, and one of the first questions being asked of them was “are you an enrolled member”, so that the operator can send the right personnel. However, instances like this will happen no longer. This agreement assures that any trained law enforcement professional can and will respond in the quickest manner possible. It will no longer be a matter of who has jurisdiction, but rather who is the closest to respond.

This MOU is one of the first of its kind for North Dakota. The first one being done by McLean County Sheriff J. R. Kerzmann and East Segment/TAT Tribal Law Enforcement recently. “I give my kudos to J.R. [McLean Country Sheriff’s Department] he really laid the foundation for all of this”, commented NDHP Colonel Solberg. Chairman Mark Fox has hopes that this MOU will serve as a model for other sovereign nations so that they also may have the mutual aid that is desperately needed for the people. “These drug dealers can no longer hide here or take off from our officers off the reservation anymore, I welcome and invite all law enforcement into our land now so that they can join this fight against drugs here”, commented Four Bears Segment Councilwoman V. Judy Brugh, who is also head of the judiciary committee that worked with the NDHP on this agreement.

The TAT Judiciary Committee has worked with the NDHP Cultural Liaison Sergeant Jenna Clawson Huibregtse on this agreement since 2018. Although there was a lot to work through in the last three years, the teams persisted. Even after being told over 146 times that “a tribal and state law agreement wouldn’t be possible”, Sergeant Clawson Huibretgtse continued to work towards a mutual agreement between the state and tribe. Colonel Solberg mentioned that tribal leadership determined the level of jurisdiction that the North Dakota Highway Patrol has on tribal lands, so as not to infringe on any sovereign rights of MHA and its people. Throughout this work, the partnership between the state and tribe has strengthened with a better understanding of each other.

The Memorandum of Understanding was held on Monday October 4th, at the Interpretive Center. The event was held outdoors, overlooking Lake Sakakawea on what had to be a record high temperature day for Fall season. Representatives from various law enforcement agencies attended in support of the agreement including the North Dakota Highway Patrol, McKenzie County Sheriff’s Department, Dunn County Sheriff’s Department, and Ward County Sheriff’s Department. Chairman Mark Fox, Governor Doug Burgum, Colonel Brandon Solberg, and TAT Chief of Police Marty Foote sat together to officially sign the agreement to join law enforcement resource for “a brighter, safer future for North Dakota”, as Governor Burgum would call it. A meal and social was held after for everyone in attendance to celebrate the historic signing. 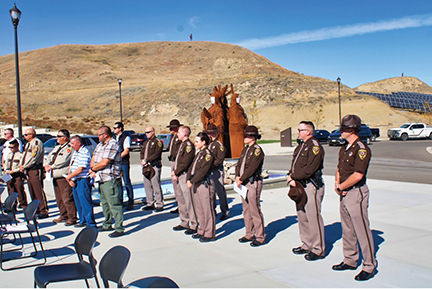 Law enforcement was honored at the beginning of the ceremony when Little Shell drum group rendered the honor song for veterans. 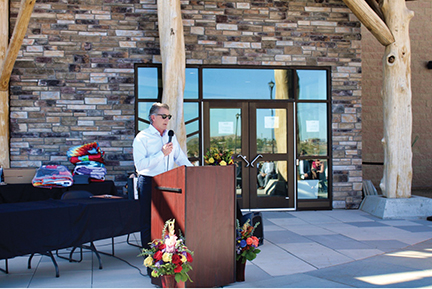 “Whether it be a citizen of our state, or someone within our geography that is enrolled or non-enrolled – when someone calls 911, this agreement assures that a trained professional will respond quickly and it will no longer be a matter of who has jurisdiction, but who is the closest to respond”, stated Governor Doug Burgum during the MOU Ceremony. 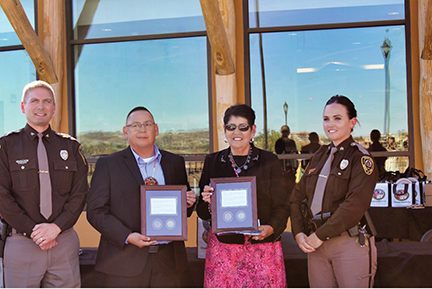 Four Bears’ Councilwoman V. Judy Brugh and her staff Roger White Owl both received an award from the ND Highway Patrol for their efforts and contributions to getting this tribal resolution passed into its final agreement that was signed on October 4th.