Sakakawea of Hidatsa/Crow Descent; Did History Get It Wrong?

For generations, it has been taught and widely believed in school, movies, literature, and in museums that Sakakawea was a Shoshone woman who guided Lewis and Clark on their expedition throughout the Louisiana Territory in the 1800’s. It is in fact true that she did guide the men on their journey. However, recent studies and research done by the Sacagawea Project Board of the Mandan, Hidatsa, and Arikara Nation presents contradicting evidence of who Sakakawea actually was. In their recent book release, “Our Story of Eagle Woman, Sacagawea, They Got it Wrong”, the group states that Sacagawea was actually of Hidatsa and Crow descent from the Northern Plains tribes. 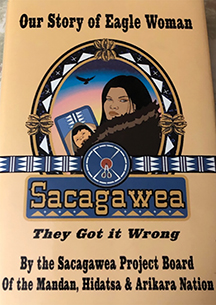 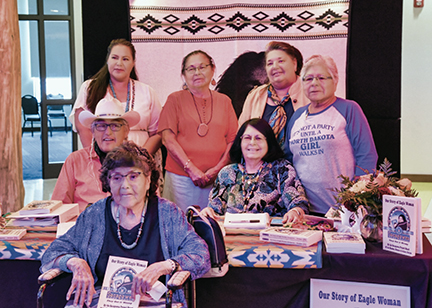 Delores Sand along with the authors of the book “Our Story of Eagle Woman, Sacagawea, They Got it Wrong” 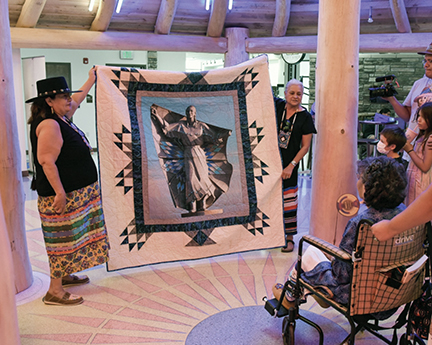 Director of the MHA Nation Interpretive Center Delphine Baker alongside Councilwoman Dr. Monica Mayer presenting this uniquely designed star quilt to Delores Sand, who is believed to be the oldest descendant of Sacagawea.

While history books and mainstream media were projecting their ideas of Sakakawea, elders throughout MHA Nation were passing along their own accounts of Sacagawea through oral history. Families throughout the community remember hearing such stories, some of them coming from different families. The stories all told the same story, “Don’t believe what they [mainstream society] say, Sacagawea was a Hidatsa woman from here.” According to tribal history, the Hidatsa and Crow tribes had a close relationship and even 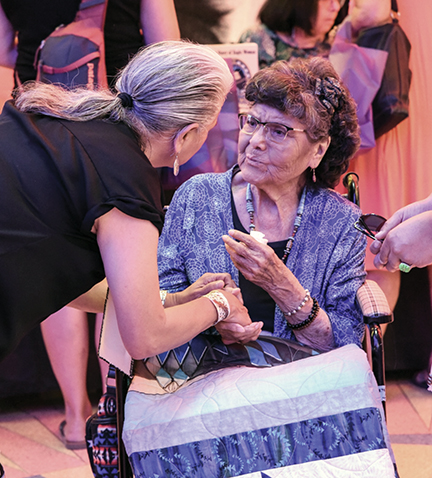 North Segment Councilwoman Dr. Monica Mayer gifting Delores Sand with a beautiful star quilt with a picture of the Sakakawea statue on it.

settled close together before the Crow tribe moved further west into modern day Montana. The language and namesakes of the two tribes are very similar.

The state of Wyoming has held Sakakawea as a prominent historical figure in their state. It is claimed that Sakakawea and her son Jean Baptiste are buried alongside each other in Wyoming to this day. According to the book, this is partially true due to the fact that a Shoshone woman had a son named Baptiste and the mother and son are buried next to one another in modern day Wyoming. However, the book goes on to say that the pair are not Sacagawea nor her son. The real Jean Baptiste was adopted by William Clark and was raised and educated in Europe. Later in his life, Jean Baptiste settled in the west until his death, where he is claimed to be buried in modern day Oregon.

So, who is Sakakawea you may be wondering? Further research done by the authors goes on to provide family ties to the real Sacagawea. According to the book, tribal records show that Eagle Woman (Sacagawea) was a biological sibling to Cherry Necklace, a prominent medicine man who was half Crow and half Hidatsa. It is believed that Sacagawea and Charbonneau settled into Knife River, which is present day Stanton, North Dakota. It is also believed that Sacagawea and Charbonneau’s grandson William Parshall founded the small town of Parshall, North Dakota generations ago. According to the book, a DNA study was conducted and provided information that correlates this theory of the Parshall family ties to Sacagawea, her sister Otter Woman, and Toussaint Charbonneau.

The Sacagawea Project Board of the Mandan, Hidatsa, and Arikara Nation worked diligently on this project for six years. Throughout that time, they have actually tracked down who they believe to be the oldest blood relative of Eagle Woman, Sacagawea. Her name is Delores Sand, an 80+ year old woman. Her maiden name is Parshall, and her father was actually George Parshall. George and his father are some of the earliest known settlers of the town named after their family. Delores Sand (Parshall) is alive and well today. The Project Board held a special promotional event at the MHA Nation Interpretive Center on Saturday August 14th, which featured Delores and her family along with the authors of the book. Book signing, meet and greets, photos, and a meal was provided at the Interpretive Center. It was a wonderful time for all who attended. A special interview was broadcasted on KMHA Radio as well and it was quite an interesting subject to hear about. I (Anne Morsette) and another on-air radio personality conducted the on-air interview and I am very intrigued by it all. Paperback copies of the book are available for purchase at the MHA Nation Interpretive Center west of New Town.  The Project Board responsible for the research, study, and publication of the book is composed of the following: