Lisa Lone Fight, M.S. Land Resources & Environmental Sciences, is the Director of the MHA Nation’s Department of Science, Technology, & Research here on Fort Berthold. She has been appointed by the U.S. EPA Administrator Michael S. 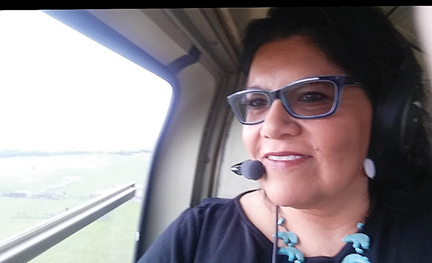 Lonefight assesses a temporary pipeline via aircraft when first starting as a scientist with the MHA Nation.

Regan, as a Standing Committee Member of EPA’s Science Advisory Board (SAB) in Washington, DC.

Lone Fight is one of 22 women and 25 men, including 16 people of color, selected for this prestigious membership, making it the most diverse SAB since the committee was established.

To those that know her and work with her, this appointment comes as no surprise and is a good fit for the EPA and for Lisa’s areas of expertise in environmental science, remote sensing, and indigenous science. When asked if she felt that her appointment as an indigenous woman from the MHA Nation was important to the EPA and the Advisory Board, Lone Fight stated, “Representation from the MHA Nation is critical during this time where we are working to responsibly and sustainably develop our resources. Understanding the unique cultural, social, and environmental aspects of the reservation can make EPA a stronger partner for all tribes. For a variety of reasons, having an indigenous woman on the committee is timely, strategic, and essential.”

Lone Fight’s membership to the Science Advisory Board is important not only to the Tribal Nation, but in general, since pollution and environmental threats are an issue across the U.S. and the world. Lone Fight states that pollution does not respect borders, so speaking of it in terms of geography may be misleading, and suggests that the topic may be better addressed by focusing on facts such as we all require clean water, air, safe recreational spaces, and healthy work environments.

Her new appointment to the SAB by the Director of the EPA fits well with the strategic science plan of the Science, Technology, and Research Department on the Fort Berthold Reservation. Lone Fight stated that her tendency of selecting work that contributes to both her department and the tribe, should not add too much stress to an already jam-packed schedule, “some travel time perhaps,” stated Lone Fight, noting that many things are still being done on zoom and via telephone and email.

Lisa sees her appointment to the SAB as an acknowledgement to the substantial work that the MHA Nation has done in employing scientific expertise to address the tribal nation’s needs. Her hope is to showcase the multi-generational nature of MHA scientists, particularly the women who have been geneticists, soil scientists, hydrologists, forever.

The local scientist and tribal member is waiting to hear from committee leaders in the next few weeks on next steps, and on receiving information on when she will be formally seated on the Committee, at which time she will begin representing the MHA Nation and our community in Washington D.C.