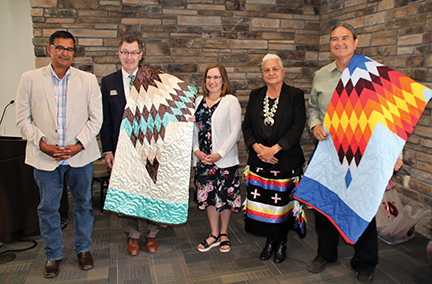 University of North Dakota President Andy Armacost and Dr. Donald Warne, Director of Indians Into Medicine Program and Masters of Public Health Program recently paid a visit to the MHA Nation. Dr. Warne is also the Associate Dean of Diversity, Equity and Inclusion. The two UND dignitaries were 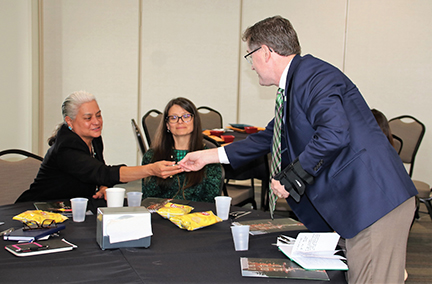 The meeting was held at the MHA Interpretive Center where Councilwoman Mayer welcomed the UND dignitaries and entourage when they arrived. The tribal leader gave a brief history of the work she has concentrated on since she has been at the helm of North Segment. Her goals of bringing the MHA Nation on par with some of the best places to live in the United States have been moving forward, but she emphasized there are still many challenges to overcome. She credited much of the success to the hard work of her staff and the unity of Tribal Chairman Fox and the MHA Tribal Business Council.

Both Chairman Fox and Councilwoman Mayer recalled their own time at the University of North Dakota as students. They graduated from the university with their doctorate degrees, Chairman Fox with his juris doctorate and Councilwoman Mayer with her medical doctorate. They shared many fond memories with the UND President and his entourage who enjoyed the entertaining stories that the two tribal leaders had that day about a few of their highlights as UND students.

Dr. Warne brought several Native American staff who are critical parts of the UND mission with him. Dr. Warne is looking to partner with the MHA Nation to identify what collaborations, goals and priorities MHA and UND can work together on to have a stronger connection with educational goals and working closer with Nueta Hidatsa Sahnish College.

“Dr. Mayer is really an advocate of data-driven projects and works in that manner. Data is important for program evaluation for grants and keeping track of trends and projects,” stated Dr. Warne. “MHA has a lot of UND alumni like Chairman Fox and Councilwoman Doctor Mayer. We had Brooke Fettig who just graduated in May through the INMED with her medical doctorate and she is from MHA. We also have Deb Wilson and Kathleen Fredericks are also on staff at UND and I think very highly of them.”

UND President Armacost acquired a wealth of life experiences before he became the head of the university. He was a brigadier general in the United States Air Force and that in itself helped him develop his leadership abilities. Armacost enjoyed sharing his experiences in his first year at the head of UND and was appreciative of the hospitality shown him, his wife and staff.

The UND group was given gifts from Councilwoman Mayer’s office and after the meeting, the MHA Interpretive Center provided a guided tour to the UND President, wife and staff. Armacost also showed his appreciation to Chairman Fox and Councilwoman Mayer by giving them each a UND commemorative coin.