On July 19th, 2021, from 11am to 2pm a group of members from the MHA Nation held a Slush Burger and Lemonade stand to raise funds to help the Indian Residential School Survivor Society. It was located on Main Street, New Town, North Dakota, just outside of TAT Victims Services. A large orange sign was out front that stated “… and a small voice whispers ‘They found us.’” 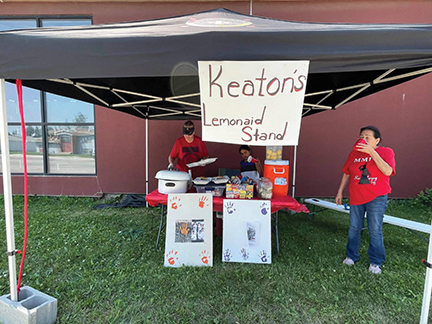 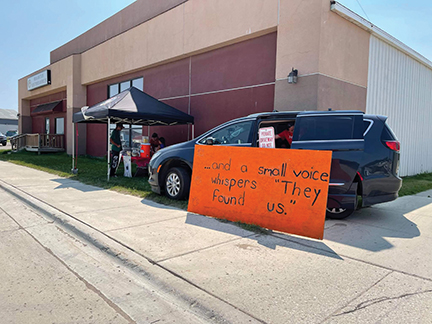 The stand was called “Keaton’s Lemonaid Stand”, Keaton is Glenda Rush’s grandson, one of the organizers of the event. She named it after Keaton because if a child could support the cause, anyone could. “If a little boy could raise money, everyone could raise money for children. We could bring a message about all the children that were murdered and found up there.” Said Rush. TAT Victim services and North Segment, Councilwoman Monica Meyer sponsored the first event.  Rush and her colleagues are sponsoring the additional events out of their own pocket.

2021 has been a year of heartache for Native Americans and people of all backgrounds yearn for them, as hundreds of bodies of Native American children have been found in unmarked graves throughout the Canada and the United States on the properties of residential schools. Some of these children had originally had headstones or markings but many did not. Reservations across the country are working on bringing their children back home and performing traditional burials. A medicine man to the lemonade stand to release the souls of the children and gave a chance for them to run and play with the children at the event. According to Rush, although he gave this opportunity, he stated that in his heart, he believed they were already with their parents.

Rush, explained that she believes that even in this tragedy we can make something positive. There can be an awakening of what the children suffered and there can be a universal understanding about generational trauma. The children found in unmarked graves are not the only victims, there are also survivors that lived through abuse and a loss of their native history. The trauma may have led to generations of alcohol and drug abuse. “They lost their culture and way of living. They were left with nothing but bad memories.” Explained Rush. “Remember, how many more people and students that they will find up there- stemmed from boarding schools. Young people need to be educated about boarding schools and hold on to their culture and language.” She continued.

If you would like to donate to Indian Residential School Survivor Society (IRSSS), whose mission is as follows: “We at Indian Residential School Survivor Society (IRSSS) strive to provide physical, emotional, intellectual, spiritual growth, development, and healing through culturally-based values and guiding principles for Survivors, Families, and Communities.” You can stop by one of Keaton’s Lemonaid Stands or you can visit https://www.irsss.ca/donate.