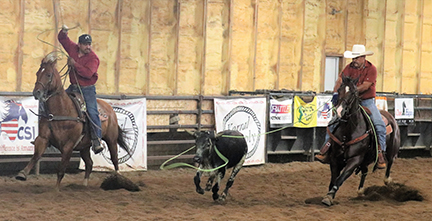 Last week, the first of three team roping events took place with many participants taking their shot at winning some great prizes. The first venue was held at the Johnson Ranch near Mandaree. The sponsors of the Team Roping Series are the Healing Horse Ranch, Johnson Performance Horses, Randy Baker Ranch and Uran Ranch. There were ropers from all across the ranch who traveled to the Johnson Ranch but the rain that fell right before the start time forced the organizers to hold the team roping indoors because the outdoor arena got a bit slippery from the much-needed rain. It turned out to be a great time for all of the ropers and the fans who showed up to urge on their favorite headers and heelers.

Added money is combined by all four sponsors while other prizes include beaded leather gloves donated by Councilman Mervin Packineau, and custom-made Palmer horse bits and specially-designed buckles that have been donated by Johnson Performance Horses. Jim Baker placed second in #9 category and won some cash and earned points the prizes.

“We are doing it to go to a variety of venues that the ropers can enjoy. Each arena is a bit different and they have different stock. Later on, we hopefully can keep it going with other added arenas and build our own little circuit. We have our own ranches in every segment and we can show our conviviality that we have among our ropers and their families,” said Baker.

The next team roping event of the series will be held at the Healing Horse Ranch on Thursday, August 5th with enter time at 6:00 and roping starting at 7:00 pm that night. The final roping event will go back to the Johnson Ranch on Thursday, August 19th. All prizes will be awarded on August 19th after all the points are tabulated. For more information, call Jim Baker at 701-421-0296 or Shane Johnson at 701-421-1558. 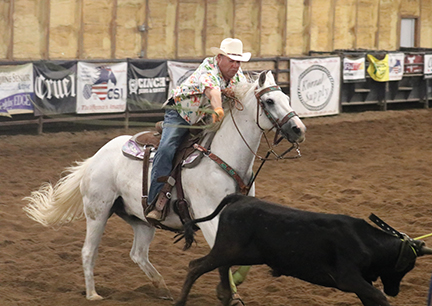