A Calling of the Warrior 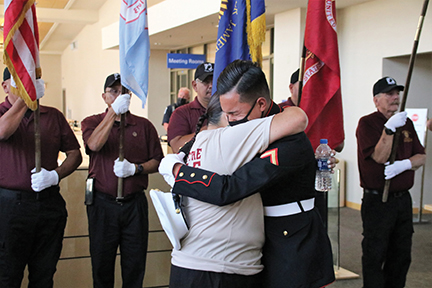 The exuberant crowd of people at the Bismarck Airport was full with excitement and when United States Marine Ira High Elk came out of the main gate exit, the honoring song echoed its first drum beats.

After the honor song ended, PFC High Elk’s mother, Caroline “Diz” High Elk moved forward to give her son a long hug that emitted powerful emotions between mother and son. It was a moment that was a memorable one for all who were there to witness it that day. PFC High Elk’s mother has been a solid rock in his life who has always known her son has many gifts to share with the world and that he is a true warrior. 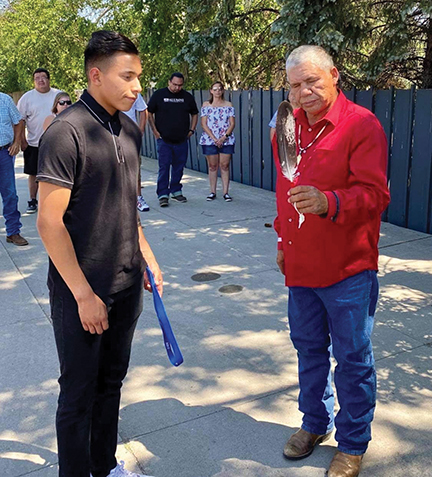 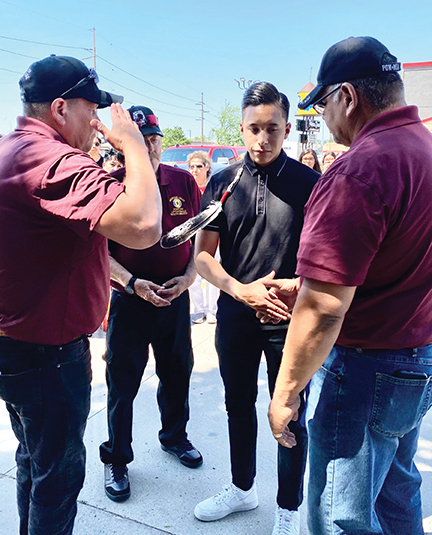 “Diz” High Elk is a proud mother and she made certain his return home for his leave would be something special and taking special care to have her son be surprised at the reception she planned for him. She had carefully arranged to have the entourage of supportive people there who wanted to be part of an honoring of her son in Bismarck that afternoon. She later hosted a dinner at Famous Dave’s Restaurant where everyone had the chance to talk with Ira and wish him well on his military journey. They all were also part of a powerful ceremony outside the restaurant where the young U.S. Marine was bestowed with the highest honor possible of a sacred eagle feather by U.S. Marine veterans and a tribal spiritual leader. High Elk’s Lakota given name is “Scares the Eagle”.

“From the bottom of my heart, I want to thank everyone in attendance, all the calls and messages – especially those from out of state,” stated Diz High Elk. “This really meant a lot to me to see all the support for him. All of the love, all our family and friends. Thank you to the Wise Spirit brothers and Frank Jamerson post and Marine veterans who showed up to bring their brother home a warrior.”

To be honored by fellow veterans and your family after completing an important stage in your military career is certainly a memorable occasion. In his young life, becoming a U.S. Marine is one of the goals PFC High Elk has kept in his list of goals and it is one that takes commitment and strength. He has already experienced many great things in life being a champion traditional dancer in the pow wow arena and an honor student all through school. In his military career, PFC High Elk will continue his training as a communications specialist. That is training that he can use when he returns to civilian life. In the meantime, he has four years of service to the country and evolve as a young warrior from the MHA Nation and Cheyenne River Sioux tribes.

PFC High Elk enlisted in the United States Marine Corps in August of last year, but did not begin boot camp until October 26th at Camp Pendleton, California. However, because of COVID-19, he ended up being quarantined in a hotel for an entire month. Once he was back on track, High Elk met all of the training and challenges head-on starting on Dec. 1st to become a United States Marine. He completed all of his boot camp training on Feb. 26th. He then went on to 29 Palms, California where he completed his training in communications on June 30th.

High Elk graduated with honors from Bismarck High School in 2019, but even as a fourth grader, his intelligence and leadership skills were recognized. In 2012, he was chosen from over 11,000 fellow students to bring in the Maryland Day flag because of his outstanding character, leadership ability, exceptional grades and the appreciation he holds for his native culture. At the Nuxbaaga Celebration, he also was asked to model the Pharell Williams clothing line. In 2018, he was voted in as President of the North Dakota Indian Youth Leadership Academy.

While PFC High Elk was home, he was honored at the White Shield Celebration and Pow Wow by veterans and the MHA Nation community, along with fellow U.S. Marine Ella Wilkinson. On the last day of the White Shield Pow Wow, PFC High Elk donned his native regalia and danced in the arena which will be another special memory for his family and many friends.

“I was tremendously happy to see him dance. We all were,” stated Diz High Elk. “I know when he hears the drum, he is grounded – that everything is okay and he is home. I admire him for everything he does, what he stands for and what is in front of him.”

He reported to his unit on July 12th and is now stationed at Camp Lejeune, North Carolina where he is a member of the Fleet Marine Force.

PFC High Elk has strong family ties and his native blood runs strong from proud heritages. His grandfather is Alvin High Elk of Eagle Butte, South Dakota, who was there at the Bismarck Airport to greet his grandson and the Cheyenne River tribal elder spent as much time as he could with the young Marine while he was on leave. PFC High Elk’s grandmother is the late Roberta High Elk and his great grandmother is Caroline Chase Pleets. In his early years of life, PFC High Elk was born and raised in the Four Bears Segment on the MHA Nation. 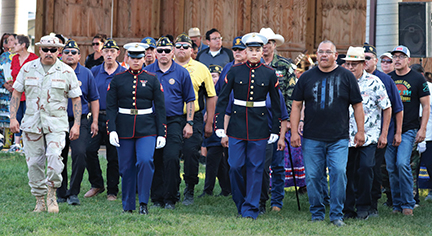