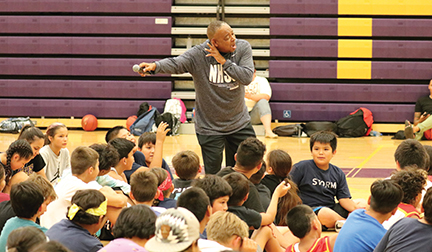 The stature of a man is based not so much on his size, but more on his character and on his courage and per-severance. The stature gained by Spud Webb over the years can be measured by his overcoming of the lack of height and the fact no one ever believed in him. However, he believed in himself and he made it all the way to the NBA. Webb came to the MHA Nation last week and gave an incredible motivational speech to the youth who were participants in the ‘Spud Webb/NHSC Storm Basketball Camp’ held at the New Town High School gymnasium. The 4-day basketball camp for grades 4-12 athletes was sponsored by the Nueta, Hidatsa, Sahnish College and the MHA Nation.

MHA Nation Chairman Mark Fox greeted Webb at tribal headquarters and provided him with a short version of the MHA Nation history and culture. The tribal chairman also noted the great sports teams that have been a mark of the MHA Nation for the better part of a century, harking back to the days of the teams from Elbowoods High School before the flooding. Chairman Fox gave a video 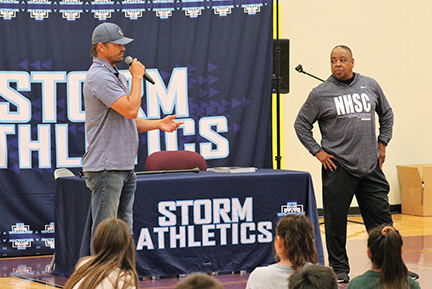 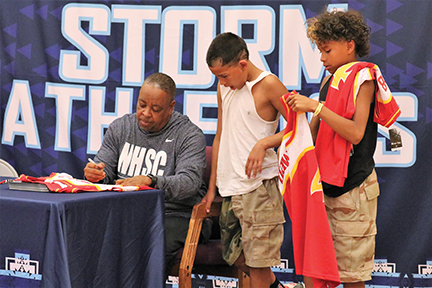 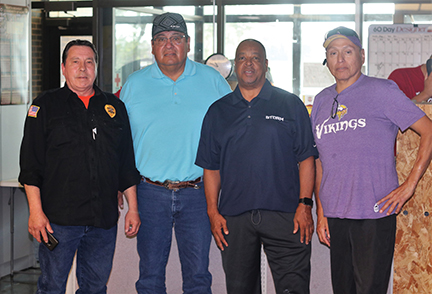 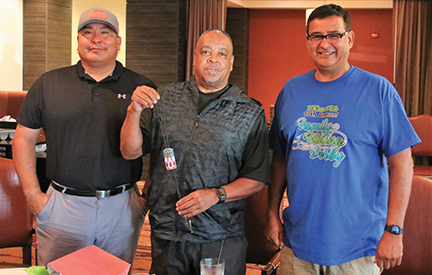 documentary on the culture and history of the MHA Nation as a gift that will offer more details for Webb about the MHA Nation. Chairman Fox then brought Webb to the MHA Interpretive Center to introduce the NBA legend to many of the Three Affiliated Tribes business partners who were gathered there for a meeting.

From there, Webb was escorted to the New Town High School where he interacted with the young athletes who eagerly awaited his arrival. After his talk, Webb patiently signed many posters, jerseys and other memorabilia that the young athletes presented him for his autograph. He also posed for photographs with anyone who wanted to be in a historic photo with a true NBA legend.

Webb shared a life story that is unlike any other NBA player’s journey and is an inspiration for anyone who has had to face obstacles that may seem insurmountable. The former NBA star is a legend both because of his ability and the fact he was the third-shortest player ever to play in the NBA. At 5’7”, Webb played like a man much taller. But he used the extreme spring in his legs to win the NBA All-Star slam dunk contest over some of the tallest and best players in the world, including his Atlanta Hawks teammate, Dominique Wilkins, who also was the defending slam-dunk champ before Webb beat him. His dunks included the elevator two-handed double pump dunk, the off-the-backboard one-handed jam, a 360-degree helicopter one-handed dunk, a reverse double-pump slam, and finally, the reverse two-handed strawberry jam from a lob bounce off the floor.

Webb told the youth in the New Town gym that afternoon that he was born in poverty and always lacked size but not dedication and work ethic. He wanted them to always remember that it does not matter where you come from or what color skin you have, it is possible to achieve success in sports and any career – just as long as they are willing to work hard every day.

South Segment Councilman Cory Spotted Bear came to visit the basketball skills camp to offer his gratitude to Webb and personally give a gift to him in appreciation for the inspiration to the MHA Nation youth.

NHSC Athletic Director Kyle DeCoteau was happy with the way that Webb was able to relate to the youth in his down-to-earth manner that seemed to connect well with all of the camp participants.

Most scouts predicted that Webb would end up playing in either Europe or for the Harlem Globetrotters because of his height – or lack of it.  However, Webb was drafted in the 4th round in 1985 by the Detroit Pistons. After the guard-loaded Pistons released Spud, his agent, Bill Blakeley arranged for a tryout with the Atlanta Hawks where Spud beat out several seasoned guards to make the opening roster. Webb played his first six seasons with the Atlanta Hawks before he was traded to the Sacramento Kings, where he had his best years statistically and played as a starter from 1992–1995. Webb posted career highs of 16.0 points and 7.1 assists per game in his first season with the Kings. He also led the NBA in free throw shooting in his last season in Sacramento, shooting 93.4 percent in 1994-95 after shooting 81.3 percent the previous season.

In 1995, Webb was traded back to the Atlanta Hawks. He played half of the 1995-96 season with the Hawks before he was traded to the Minnesota Timberwolves for Christian Laettner and Sean Rooks. He finished his career after one season with the Orlando Magic. Webb retired from professional basketball in 1997.

Webb had over 50 games with 20 points or more including a career high 34 points against the Golden State Warriors on April 21, 1993 and a career high 18 assists against the Detroit Pistons on April 19, 1986. Webb played 814 games in his NBA career, averaging 9.9 points per game, and registering 8,072 points and 4,342 assists in twelve seasons.

Since Webb made his NBA debut, only two players have been shorter than he was: Muggsy Bogues and Earl Boykins.