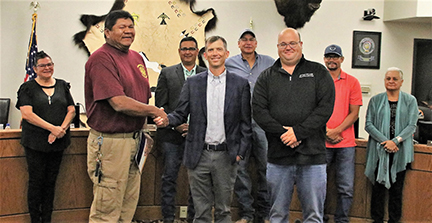 With wildfires raging across the country, the MHA Nation and Fort Berthold Reservation have not been spared from them. The Fort Berthold Reservation has unfortunately experienced a long hot and dry summer leading to extreme fire dangers and several wildfires. The MHA Nation has banned fireworks across the reservation, but it does not take much to ignite a fire under the dry conditions brought on by the drought. Recent rains have eased concerns somewhat, but the firefighters and fire prevention workers remain very essential personnel in the effort to save lives, livestock, wildlife, crops and grasslands on the reservation. Last week, Enerplus Corporation honored the Mandaree Volunteer Fire Department with the corporation’s Enerplus Vice-President Award at the MHA Nation Tribal Business Council (TBC) meeting.

“It’s the people that volunteer as firefighters in Mandaree that made it possible to first begin the containment of that wildfire. There are 12 guys on the volunteer department in Mandaree and I just accepted that award on their behalf” emphasized Baker. “The wildfire started on May 1st when the temperature was in the low 90s with a relative humidity in the low 20 percent and added with the wind gusts, that made it a ‘red flag’ day. We have been in a drought with no substantial rain all spring making it dry all over, so the environmental situation made that wildfire especially dangerous. We received the call at 2:40 pm that day when I was on my way back from Dickinson, so the volunteers were the first ones on the scene. There are rough roads in that area and by the time I got out there, the wildfire was about 20 acres in and growing fast and it was near oil well pads to the south. We made sure no one was there in danger around the well pads and in the path of the fire. Where the fire was at is steep and as far as firefighting goes, that makes it difficult. After a while, we fell back to the tops and went ahead of the wildfire to cut it off,

“Nine years ago in 2009, we had a wildfire around that area and we had to put up a dozer line around Howards Pass to contain it, but this time when we went up there, the fire was already too close to Howards Pass. This was a very fast-moving fire, so we moved to Tunnel Point and put in a dozer line there. Our crew was pretty tired by then and we settled in for some rest for a few hours. Mandaree TAT Fire Management had also come in to help out right away but I called for additional help on the federal dispatch center and it includes several federal agencies, such as the Bureau of Indian Affairs. The next day, we were able to burn it out.”

In that fire on May 1st, 10,000 acres of grasslands in the Mandaree area burned in one day and that is something Baker has never seen on Fort Berthold. Baker said the volunteers do incredible work and he is proud to be a part of that outstanding crew.