(Woman who loves her children)

Lida Lee Gayton, also called “Chickie”, was born January 15, 1957, in Bismarck, to Leslie and Lorraine (Little Owl) Gayton. She grew up and attended grade school in Fort Yates. At age 11, Chickie moved to California under the care of her sister, Claudius “Kukie”. She retuned to be with her mother, in Parshall, when she was 15. Chickie attended Excelsior Springs Job Corps in Missouri where she earned her GED in 1979. She attended United Tribes Technical College in Bismarck and graduated in 1982 as a Licensed Practical Nurse.

Chickie had a passion for caring for others. Prior to having her own children, she took her niece, Elizabeth “FeFe” Gayton, under her care during FeFe’s grade school years. Chickie ended up utilizing her nursing skills when she devoted all her time and attention to caring for her ailing mother until her death in 1990. 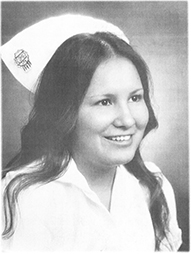 Chickie met her long-time companion, James “Chicken” Morsette Jr. and together had three children, Lonnie, James III “Fang”, and Anne Morsette. They raised their three “chicklets” in a humble home throughout their grade school years. She helped provide for her family with various jobs in Parshall including Rockview Good Samaritan Center, NE Segment Red Hall, Jack’s Steakhouse, and the Boys and Girls Club.

She dedicated her time to being a stay-at-home mother until she unexpectedly fell ill in May 2009. She then entered assisted living and was well cared for throughout the past 12 years at Rockview Good Samaritan in Parshall, Lakeside Community Living Center in New Town, and Good Samaritan Society of Mohall.

Though she was ill, Chickie always had a smile on her face and loved to share a good laugh with those around her. Lida “Chickie” Gayton, age 64, died Tuesday, June 8, 2021, at a Minot hospital, with her family at her side.  She will be remembered as a loving mother and caring friend.