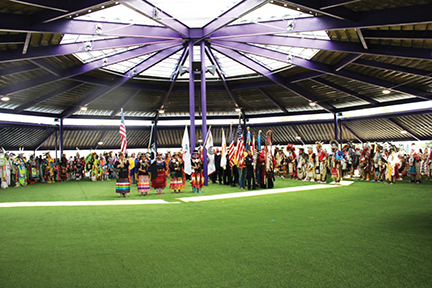 Grand Entry was a sight to see and the experience was so surreal under the brand new Santee-Lucky Mound Harbor.

The northeast segment community of Parshall welcomed relatives and visitors from all over the North American continent this past weekend of June 24th through June 27th for MHA Nation’s first outdoor powwow of the 2021 season. It had been over a year and half since a powwow has taken place in any outdoor arena on Ft. Berthold. The weekend was full of fun and excitement for all ages! Visitors camped all weekend long and enjoyed each other’s company. Life almost felt normal again, as it had been prior to COVID-19. With a few added safety measures in place, everyone was able to enjoy the powwow weekend, rain and all!

Formerly known as the Nuuxbaaga Powwow, the Santee-Lucky Mound Celebration hosted hundreds of visitors at the newly developed Powwow grounds south of Parshall. After the pandemic shut down 2020’s festivities, the 2019 Powwow committee agreed to stay aboard and serve for the 2021 celebration. Fundraising for the four-day event began in May 2021, and their efforts were supported greatly by North East segment representative Mervin Packineau. Thunderstorms and high winds from the previous year ravaged the original powwow harbor. Demolition of the old one and construction of a brand-new arena was decided eight weeks before the celebration was set to kick off. More land was purchased and construction work began right away with some of its final projects being completed moments before the first grand entry on Thursday June 24th. Nonetheless, the Santee-Lucky Mound arena and camping grounds turned out great!

Vendors from far and near set up shop early and camp sites were staked out as early as three weeks before the celebration.  With the newly developed area, there was plenty of camping and parking spots available to all the visitors throughout the entire weekend. Over 500 dancers registered for the weekend along with drum groups from local and far away places such as Canada or New Mexico. Everything felt as if the pandemic had never happened, however the mask wearing and fist bumping over handshakes served as reminders of what was, and to practice safety precautions even in the outdoors.

The arena was packed with spectators watching grand entry each day. The color guard posts of Ft. Berthold led the way in the arena at the direction of flag bearer Dusty Olson. Men, women, 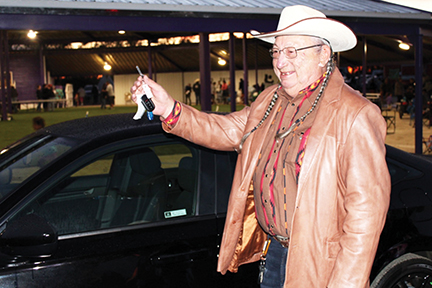 Terry Fiddler was the men’s champion of the vehicle giveaway. The vehicle was more modern than what he’s used to, but he was very excited and blessed with the lucky gift. 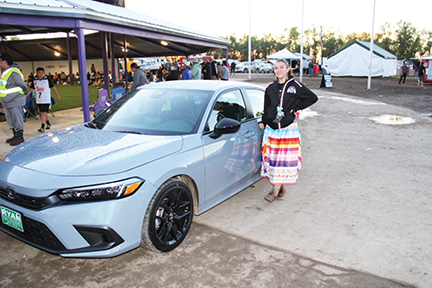 The women’s lucky winner of a brand new Honda Civic, Asjha Tveter! It was an exciting and emotional moment for her when she realized she was the last one standing in the luck of the draw. 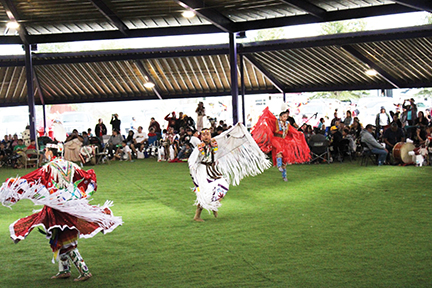 Women compete for their spot at a prize during a women’s fancy shawl contest. 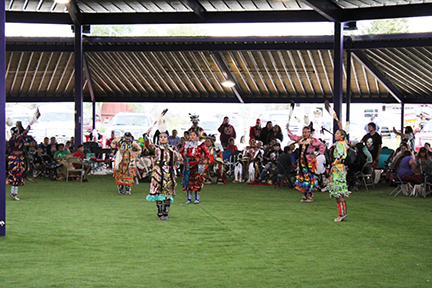 Dancers and their regalia were protected under the newly constructed harbor. These women danced two songs for their final score on Sunday. 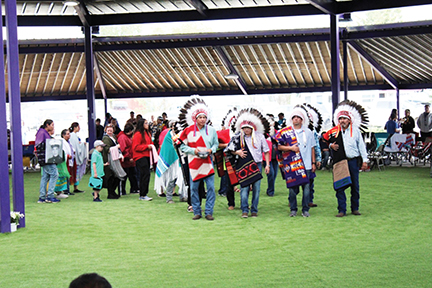 The Packineau family honors their loved ones whose flags were raised Saturday June 26th. All four brothers, Emerson, Mickey, Charles, and Dusty Packineau, served in the U.S. Military. It was a special honor to have all four branches of the military represented by four brothers at Santee-Lucky Mound Celebration. 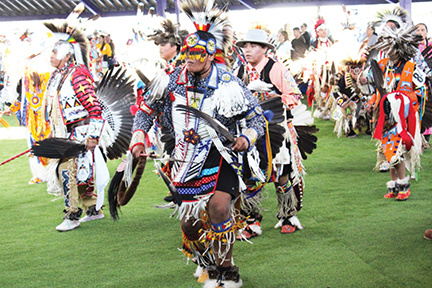 The fresh green turf cushioned dancers feet as they danced their style during grand entry.

and children’s dancers of all ages entered in with their respective category, dancing their style on the fresh green turf laid out days prior. The weather was nicer than it had been throughout the week. It had cooled off to temperatures from the high 60’s to the mid 70’s. Although the skies were overcast, the newly erected arena provided great coverage from the sun and rain. Smells of fried food filled the air all weekend long. The familiar sounds of Charlie Moran echoed throughout the arena on the big speakers along with guest MC Howie Thompson from Canada.

Flags were raised each day to commemorate veterans who have passed on. Friday’s flags were Henry Sun (Army), Harry McAndrews (Army), and Pat Malnourie (USMC). Sunday’s flags were Lyle Gwin (USMC), Lawrence Olson (Army), and Dennis Howlingwolf (Army). It’s a great honor to those who have served and passed on to have their flag flown. However, this weekend featured a very special flag raising on Saturday. Dusty Olson accomplished one of his bucket list item goals as flag bearer by flying four brothers’ flags all in the same day in their hometown community of Parshall-Lucky Mound. Emerson Packineau (USMC), Mickey Packineau (USAF), Charles Packineau (Navy/Army) and Dusty Packineau (Army) were all brothers who served in the U.S. Military. Although they have all gone on to the other side, the families were brought together once more to honor these four brothers as their flags were raised Saturday at 8:00 o’clock in the morning until they were retired at 5pm that evening. “Chasing these flags is a challenge, but here’s four brothers who covered all four branches of the military. It doesn’t always happen that way- to have all four branches of the military represented by one family”, commented Dusty. He had to have an extra flag pole installed for this special moment.

Specials kicked off Thursday night with the Cowboy/Cowgirl Tiny Tot sponsored by Joltyn Driver and family. Friday night held the Golden Age Men’s Traditional special sponsored by the Mickey Rush family and the honoring of Jaxton Hart with a tiny tot boys and girls special. Saturday’s specials honored Addy Young and the women’s fancy shawl was sponsored by Fancy Hernandez family. Patricia Poitra held a fry bread contest as well. Saturday’s feed was sponsored by MHA Chairman Mark Fox, which featured a KFC catered meal for all under a Quonset which provided shelter from the rain. On Sunday there was a women’s old style buckskin special honoring Sharon Young and a women’s old style fancy shawl dance to honor the powwow committee’s president Karen Walks.

The powwow trail provides monetary incentives for those with enough talent and skill to win, however, Santee-Lucky Mound’s powwow gave all the winners a chance at something more than prize money. The top three men and women adult dancers of each category had a chance to win a brand-new vehicle, courtesy of North East Segment office of Councilman Mervin Packineau. A “luck of the draw” with the last person standing gifted one lucky winner with a light blue or a black Honda Civic.   Asjha Tveter and Terry Fiddler were Santee-Lucky Mound’s lucky winners! Each drove off in their new vehicle from the powwow grounds.

The weekend was full of family fun, friendly visits, food, dancing, and music. Friends who maybe haven’t seen each other in over a year got to visit at the campsite and cheer each other on in the arena; food and crafts were enjoyed by visitors all weekend long; honoring of loved ones resumed in the new powwow arena. Although crews were running on crunch time, it turned out better than imagined for the 2021 Santee-Lucky Mound Celebration. President Karen Walks expressed great thanks to Councilman Mervin Packineau, the Parshall community, and her powwow committee for all their hard work over the past few months in pulling a spectacular weekend off. The arena was well broken in and will host many more celebrations in the coming years.