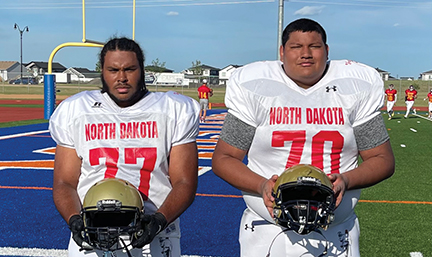 “Why are you here, why are YOU hear?” was the question asked to the players by the keynote speaker for the 2021 ND Shrine All-Star Football game banquet which was attended by well over 500 family members of the players and their fans in Fargo ND on June 19, 2021. “You

are here because we, as a committee, went out and got the best football players North Dakota has to offer and even more importantly for your citizenship on and off the field in the communities that you are representing here today.” The players arrived at Mayville State University for a week long of 2-a-day practices on June 15, 2021. On Saturday June 19, 2021 the teams traveled to Fargo for their pre-game banquet. At capacity filled banquet the players were given the opportunity to introduce themselves and their respective schools. A very nice meal was served followed by an auction of Shrine Bowl player autographed memorabilia which were 2 Shrine Bowl helmets and 2 footballs, one of the helmets was auctioned off for $4,500.00 with all proceeds going to the Shrine foundation which helps kids across the country who can’t walk and kids whom are born with correctable birth defects, which is an even bigger reason these kids play this very game.

MHA Nation enrolled members Stephan Packineau, a 6’3” 320-pound offensive lineman and his 6’7” 360-pound Shiloh Christian “Skyhawk” teammate Dylan Finley, who were coming off Class A back-to-back ND State Playoff appearances and a 2020 Region 4-A Football Championship, which is the 1st in the history of Shiloh Christian School history suited up for the Shrine Bowl west team, Stephon as an offensive lineman and Dylan as a defensive lineman. When they entered the game, their presence was evident as Stephan 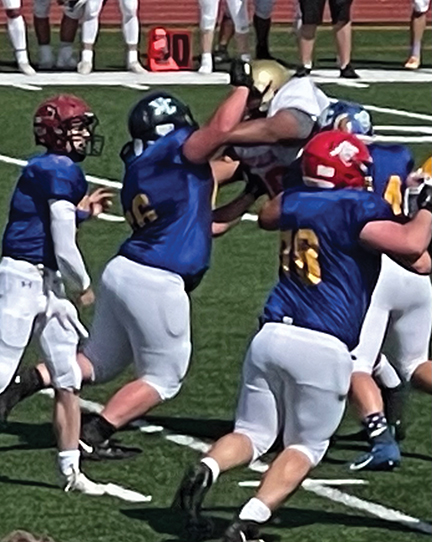 proved that he belonged with his 2nd team all-state offensive lineman playing ability put in display for all to see; Finley was a constant in the East squad’s backfield, though he drew double and triple teams as he fought his way to the East team’s backfield. These guys proved that they were a force to be reckoned with in the trenches of this prestigious game. At the games end, the west team had a chance to tie the game but a pass on 4th and goal with no time left on the game clock was knocked out of the hands of its intended receiver and the game ended with the east team winning by a score of 28-21.

Earlier this spring both of these Shiloh Christian School graduates signed National Letters of Intent to enroll at the Wahpeton State School of Science in Wahpeton ND where they will play football for the “Wildcats.” During their signing celebration which was held at the MHA Nation’s state of the art Sage Coulee facility in Bismarck, ND MHA Nation enrolled member Rusty Gillette, a former CBA professional Basketball player and current iFive graphics owner said; “How often do we see 2 Tribally enrolled members who go to the same school and, as teammates enroll at the same college on the same day to play a college sport?” At the close of his Shrine Bowl keynote address at  their keynote speaker said; “Today some of you will put on your football gear for the very last time of your life, the very thing that brought you so much joy and happiness and at times broke your heart will no longer be a part of your life, all you’re going to have after today is the memory of being a high school football player and capping off your career by earning your way to play in today’s game, congratulations on your stellar carreers.” Fortunately, the opportunity to play on past high school has been earned by these MHA Nation model football players. If you believe you can do something and are willing to sacrifice for it-you can!! 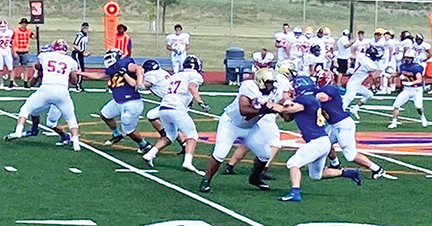