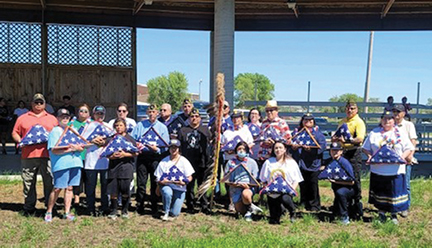 Joseph Young Hawk/Elmer Bear Post 253 American Legion and Auxiliary sponsored Flag Day activities. The morning started with the line up for the parade at the Veteran’s Building (Formerly WS Senior Center). Families were invited to bring their flags of their loved one, we had twenty-four (24) registered flags for the parade, along with two big floats and 1 small float. As the parade made their way to the Arikara Celebration grounds, two US Marine Veteran’s, Cederick Wilkinson and Bernadette WB Hall led Marine chants on the way. The Parade was met by the White Shield Summer School Kids as they came into the grounds, families made their way around the Arbor and came in from the North as the announcer Pete Coffey Jr. presented the names of the flags: Joseph Young Hawk – US Army, Elmer Bear – US Army MIA 1950, George Foote Jr. – US Army POW,  Myron D White Bear Jr. – US Marine Corps Lisa White Bear – US Army National Guard, Grayden Bear Sr. – US Army, Kenneth Deane Sr. – US Navy, Paul Howling Wolf Sr. – US Navy, Elizabeth Felix – US Army, Glen Brunsell Sr. – US Army, Quinton Simpson – US Air Force, William Howling Wolf – US Marine Corps, John Wilkinson Jr. – US Army, Howard Wilkinson Sr. – US Marne Corps, William (Shang) Wilkinson Sr. – US Marine Corps & US Army, Robert Bear Sr. – US Navy, Terry Howling Wolf – US Navy, Gerald White Sr. – US Army, Michael McDonald – US Army, Vernon Wells – US Army, Nicolas Fox Knight – US Army, Evan Gillette Sr. – US Army, Myron White Bear Sr. – US Army and Reginald (Mickey)Wells – US Air Force and US Navy.  Arikara Flag Song was rendered before family members presented their loved one’s flag to Legion Member/USMC Veteran Bernadette WB Hall to be displayed throughout the program. First item on the program was Flag etiquette, Bernadette explained how to display, take care of and dispose of the American Flag. Also strongly recommended what not to do with the American Flag.  The Arikara Flag song was explained, “Nicholas Fox dreamed about the Flag song while in a fox hole, upon his return home he told Davis Painte who then composed into song”. His son Jule Knight and Grandson Donovan Knight participated and represented him in the parade. First song the drum group sang was song for the Legions, originally Joseph Young Hawks song, Helen Gough gave her Uncles song to the American Legion. Next song the drum group sang was the Vietnam Song, this song was composed by the late Ralph Wells Jr. in honor of his sons and all the Fort Berthold boys serving in the Vietnam War. Thomas Wells Jr. spoke for his Aunt Vina McDonald, telling the crowd how closely related we are naming families who had service men/women including her own sons, daughters and granddaughters who all served in the Armed Forces. A short history of the American Legion Auxiliary was given to Bernadette to read on behalf of our Historian. Drum group sang a couple more songs, then a boxed Picnic meal was served. Madonna Azure, President American Legion Auxiliary also spoke about our 100th Year Anniversary, told people to look at the Posters that show our major events and local activities from the time she was elected as President. The next North Dakota Auxiliary President for 2021-2022 was introduced, Sharon White Bear, her swearing in will be June 27, 2021 1:00 PM at the Ramada Inn. All Auxiliary members were encouraged to attend. Our Unit handed out gift bags to the visiting Ladies Auxiliary, visiting ladies and members. Program was a great success, Legion and Auxiliary would like to thank all the families who participated represented their loved ones. Plans are already in the works for next year.

NOTE: Names of flags were not announced in order as families entered the arbor, went by the list as they registered the flag. Pictures courtesy of Gen Azure, Tony Lone Fight and Leah Black Hawk

Parade on their way to Celebration Grounds

Family Members with flags of their loved ones 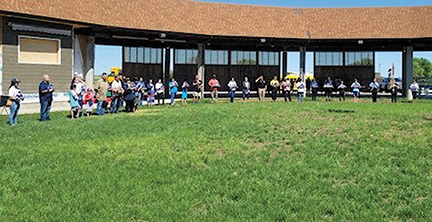 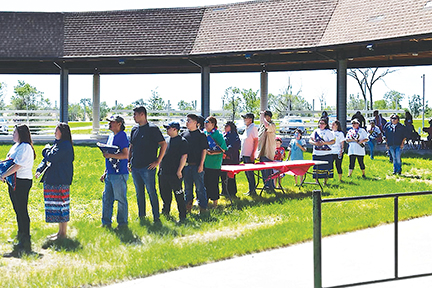