Shining Up the City of Parshall 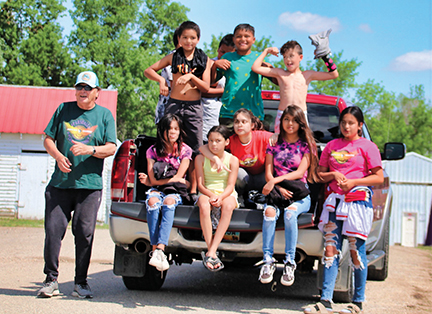 The annual Northeast Segment Community Cleanup Day is always a blast, especially for the youth. Councilman Mervin Packineau stated in his welcoming to the over 150 walk/run participants that the cleanup work is appreciated and starts the youth out on the right path in learning the importance of having community pride and building a good work ethic. 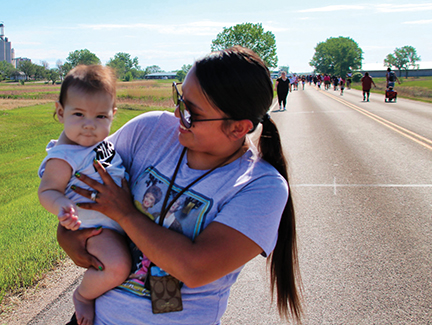 There were some guest speakers, such as Teliea Baker and Tianna Dubois from The Door in New Town who both encouraged the youth to stay on a healthy path with a drug and alcohol-free lifestyle. The walk/run was fun for all and there were a good number of elders who also took part in the event on Tuesday morning that started near the Parshall/Lucky Mound Veterans Memorial Hall.

The morning events all began with the registration at the Red Hall Garage and the youth earned Mega Bands for the upcoming North Dakota State Fair. A lunch was served at the Healing Horse Ranch after the walk/run after the people split up in groups to clean up around town and with so many hands working together as teams at once, it was not long before the cleanup was noticeable. All were toiling hard in the effort to make Parshall a shining example of community pride.

After the labor of love was finished in Parshall by the many dedicated groups of residents, there was a bingo for the adults in the shade of a big top tent that had many great prizes. There were bouncy houses and a climbing wall that were set up at the Healing Horse Ranch grounds for the youth while the bingo was going on.

Music and bingo calling were provided by DJ Rocks and the delicious food was catered by local cooks. The MHA COVID-19 Task Force set up an information booth near the big top tent throughout the event.

There will be a second chance to win a Mega Band at the upcoming Parshall/Lucky Mound Santee Pow Wow Celebration on June 28th.