The ‘Invincible’ Clash at Chairman’s Bowl

It was one of the most exciting Chairman’s Bowl in several ways last week as young elementary football teams took to the field at the Parshall High School Sports Complex football field.

Every young athlete has a dream to achieve great things in any sport that they put their time and efforts into. The field of dreams for the four teams competing had some special guests that evening last week who spoke about the importance of dedication and sportsmanship. Tribal Chairman Mark Fox and Councilmen Mervin Packineau and Fred Fox all addressed the players and the fans who came to watch the action. 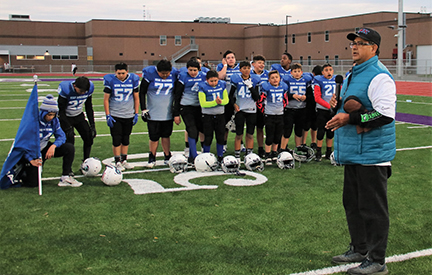 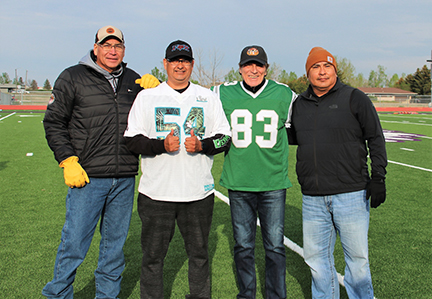 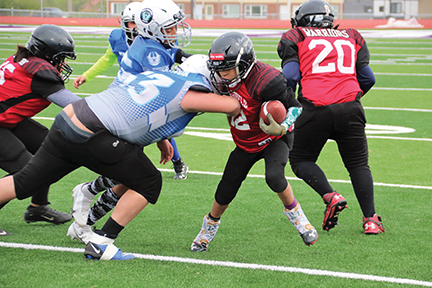 After the tribal leaders spoke, Chairman Fox introduced Vince Papale to the crowd. Papale was an NFL player whose life story was featured in the hit movie, ‘Invincible’ that starred Mark Wahlberg. Papale was teaching at his high school alma mater in Pennsylvania at the age of 30 when he made the Philadelphia Eagles as a wide receiver, kick returner and special teams player. Papale encouraged the players to always go find advice from the ones who truly have their best interests at heart like he did in life – and to always listen to parental advice.

“What you are seeing right here are a whole bunch of kids that will eventually and are invincible and that’s what you’re all about too,” Papale told the players and fans. “To the parents and to everybody here from the officials to the chairman, to the councilmen and especially to the kids, God bless you all and thank you so much for having me here and being a part of this.”

Then the action of the games commenced and the crowd was not only entertained but they felt inspired by the young talent that were in full football gear and helmets. The physical play was that of young boys who are all destined to be tough men on the gridiron. The Parshall Braves came up short in the first game of the evening to the New Town Eagles squad that had good size and had some nicely-designed plays that called for good blocking up front. The Eagles took home the third-place trophy after that first contest and the Braves captured fourth place.

The championship game pitted the White Shield Warriors against the highly-touted Bismarck War Machine. The War Machine had overwhelmed the Warriors in a game during the season but it would be a lot different in the game in Parshall. The Warriors played their hearts out and were in striking distance at 14-8 until an interception by the War Machine at mid-field with 1:47 left in the game iced it for the team from Bismarck. The War Machine is made up of a variety of elementary students from Standing Rock Sioux, MHA Nation and Spirit Lake. The defending champions from Bismarck met up with a determined White Shield team that made a great contest out of the final matchup of the season and Papale was credited with inspiring the Warriors to play to their capabilities by Councilman Fred Fox.

Councilman Fox personally thanked Papale for visiting individually with the players from White Shield the night before and to inspire them to play their best.

“I would also like to thank Vince for coming here and he did a heck of a job last night with all of our kids in White Shield and got to visit with every one of them,” said Councilman Fox.

As the host of the Chairman’s Bowl this year, Northeast Segment Councilman Mervin Packineau was honored to have special guests and such enthusiastic young players at the game. He was also pleased to have so many people show up to support the players and the communities they represent.

“I thank everybody for coming out there tonight and supporting these young players. There is some good football going on here. Make sure you cheer the teams on and show your love for them and the sport. Thank you all again for coming to this beautiful facility in Parshall, North Dakota,” Councilman Packineau stated. 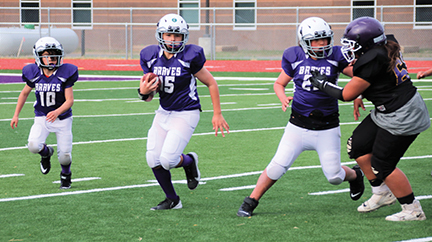 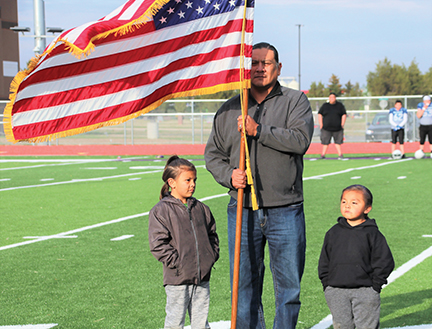 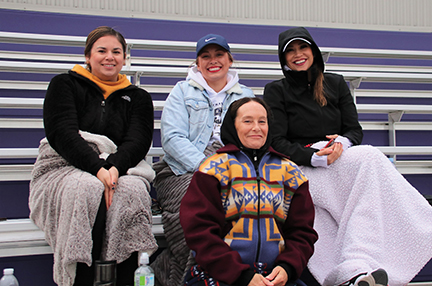