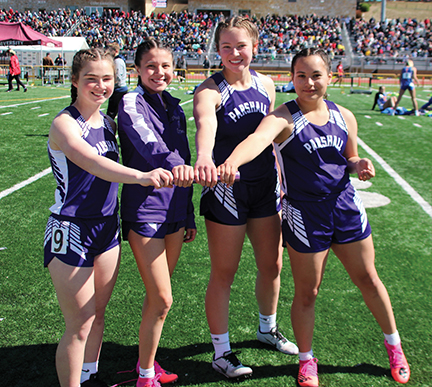 The New Town Eagles are usually laden with state qualifiers in their many years of building a great legacy in distance running. This year, the Eagles had two make the qualifying times and make the trip to Bismarck and compete among the best in the state.

Colt Spotted Bear and Emma Wheeling are both elite runners in the 1600- and 3200-meter runs. Spotted Bear earned his place on the podium with the best runners in the state with a gutty performance on Saturday in the 3200-meter run. Spotted Bear placed 7th in state and in that remarkable effort, the sophomore knocked almost 14 seconds off of his personal best time in that event. Spotted Bear’s family members were there to spur him on in the 1600 meter run on Friday and then on Saturday they were there to witness their young track star rise above the obstacles he faced for the past year. Spotted Bear won his coveted plaque by running the 3200 meters in a time of 10:06.84.

Missi Spotted Bear said the family was “super proud” of her son and it was a memorable time for every single member of the Spotted Bears.

“Colt has overcome so many obstacles in the past year or so,” said Missi Spotted Bear. “Our family was hit hard with the COVID virus. Every one in the family got it and Colt got it too. The only one who didn’t get COVID was myself and I have been in my own health battle for a long time. So for Colt to fight through all of these things is something that shows his focus and being able to rise above anything. It was also very special that all four of his grandparents could be there to witness him running so well. I really think that the good energy from the four elders of his family was powerful and gave him that extra rush of inspiration he needed to do so well in his races.”

Spotted Bear not only placed 7th in the 3200 for a spot on the podium, but he nearly placed in the 1600 meter run the day before coming in 9th place. The top eight finishers are awarded plaques and are brought to the winner’s podium. 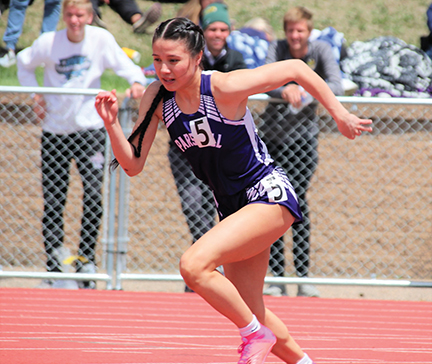 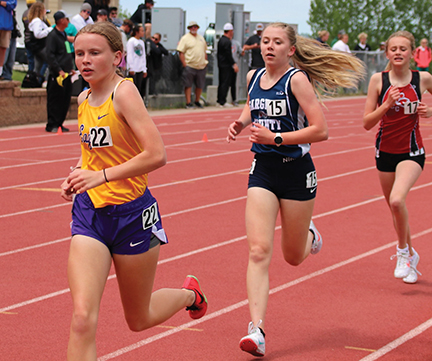 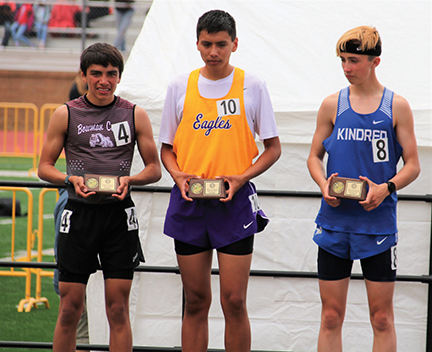 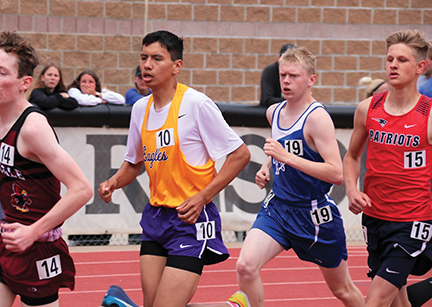 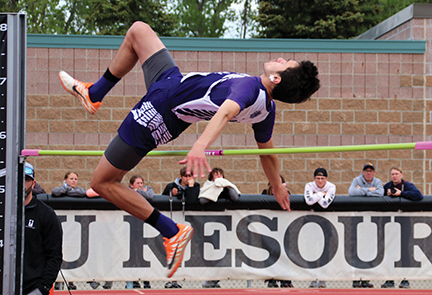 Wheeling competed in both the 1600 and 3200 meter runs at the state meet but she did not place in a very competitive girls division. In the 1600 meters, Wheeling did well by placing 14th out of 24 runners in that race. In the 3200 on Saturday, the sophomore fell back at the end finishing in 23rd place.

The Parshall Braves and Lady Braves state qualifiers went into the MDU Community Bowl in Bismarck with confidence and a great attitude, said head coach Michelle Hoff. Parshall had the girls 4 X 400 relay team qualify this year as well as the defending 400 meter state champion from 2019, Jayln Hall. Also qualifying in the high jump for Parshall was Landen Young Bird.

The girls relay team missed placing but their time was very good with the team members of Jayln Hall, Jaden Sagert, Alyssa Haakenson. The Lady Braves speedster Hall ran after the relay competitions in the 400-meter dash at the state meet but she was battling a knee injury. The senior placed third in her heat on Friday just missing qualifying for the finals on Saturday.

Landen Young Bird did his high jump attempts and just brushed the bar on his last attempt with his toe as he went over the bar by a good margin. The high jumper showed great leaping ability and why he was a state qualifier for the Braves this year. Young Bird displayed athleticism in all three of his jumps and made his team coach and teammates proud.

Coach Hoff noted that being state qualifiers gave the group of Parshall track and field athletes a great experience of knowing the competition levels at state and that they know the training they need to commit to that can elevate them to success.