An Officer Making a Difference 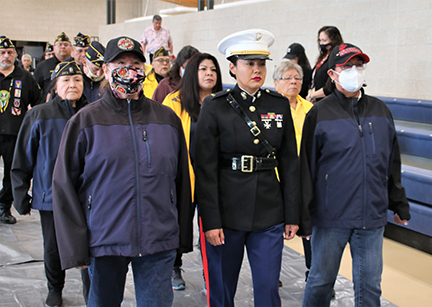 The MHA Nation has always done its best to honor their veterans and on Memorial Day, they go to great lengths to show their veterans that they will never be forgotten. The MHA Nation has many proud military veterans and many courageous tribal members in the military still serving the country. On this recent Memorial Day, a special young woman returned to honor the fallen warriors that served and to visit her MHA Nation homelands and family members on the Fort Berthold Reservation.

At the MHA Nation Veterans Center, Lt. Josefina Cisneros spoke to fellow veterans and family who had welcomed her home last week with a special honoring event last Thursday afternoon in New Town. The United States Marine Corps officer talked about how her connection to her tribal ancestors and tribal heritage has always kept her going through the hard times she faces each day as an elite soldier.

It has been a challenging path she chose a decade ago when she joined the Marine Corps. It has always been the spirits of her ancestors and the Creator that kept her going and made her realize that she made the right choice in serving in the Corps. Her journey is one she travels with many that live in her heart.

“I can’t tell you the amount of times that I struggled, had difficult times. The times I felt that I couldn’t take another step or carry another pound and when I could not give another minute of my time. Then I remembered my family and who I come from,” Lt. Cisneros said to the many who came to honor her. “I can do all these things because of all of you. It’s because every single person in this room and those who have come before me that has helped me along my way. It’s because of the strength that we all have that I know that I can push a little harder and I can go faster because of where I come from. I want to give a special thank you to the women veterans that are here today. I could not do this without all of you. So, as I leave for Virginia and to the trying time in the coming training that I have ahead, I take all of you with me. I leave as one, but I will be there as many. So, thanks to all of you. Maacagiraac.”

Second Lieutenant Josefina (Garza) Cisneros is an MHA Nation tribal member who is very proud of her family and tribal heritage. In 2010, her grandmother, Annette Benson, passed away at the age of 81 and two days after her funeral, Cisneros left for the Marine Corps and was not able to attend her funeral because she was in Marine boot camp. Cisneros was torn on what to do since she was close to her grandmother. Cisneros has the same Hidatsa name of ‘Different Woman’ (Mia-he-hosh) as her late ‘Grandma Annette’. In basic training those many years ago, Cisneros was out on a rifle range about a month after her grandmother’s passing and she having difficulties hitting the target when an eagle flew over the rifle range in the midst of all the gunfire. According to Cisneros, the instructor noticed the eagle and ordered the recruits to stop firing their weapons and all stood and admired the eagle in flight. After the eagle flew away, Cisneros acquired an instant ‘eagle eye’ and began shooting extremely well and passed her course with flying colors. She actually hit the bullseye ten times at 500 yards which is an amazing feat. It was at that moment that Cisneros felt that her grandmother Annette had just sent a message to her that she should stay in the Marine Corps. Lieutenant Cisneros now knows that was the right thing to do and is living out her dream while making her family proud. 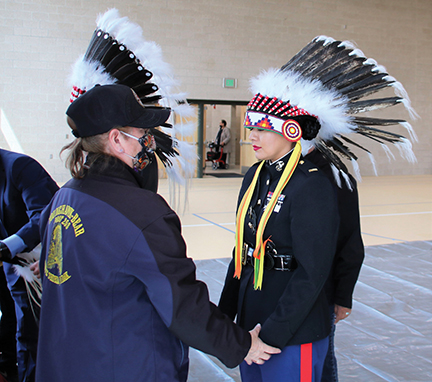 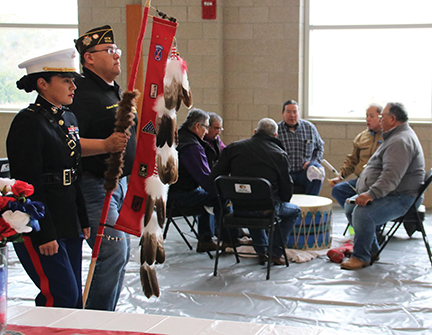