The Parshall Braves have a great history of representing the native heritage from the many native students who have attended Parshall High School. 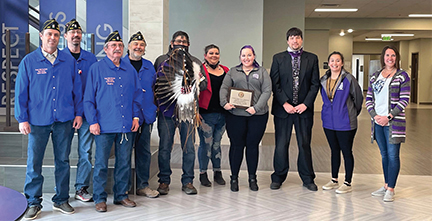 The MHA Nation students, staff, and community are very proud of their indigenous ancestry and the ancient strong traditions are important to them. The war bonnet symbolizes so many positive things that the MHA Nation is known for.  There is now an eagle feather war bonnet that catches the eye of anyone who enters the front doors of the school thanks to the willingness by a veteran’s group and a local family to share such a sacred item. The war bonnet has a true sacredness and the beauty of each one is much more than just visual. The spiritual element of the war bonnet is immensely powerful to anyone who respects and understands native tradition. For many native people, the connection felt to their ancestors is instantaneous in the presence of a war bonnet. The one that is in a glass case in the commons area of the high school in Parshall stands out and is a way for the MHA Nation students at the school to take pride in being indigenous. It serves as a reminder by the school administration that the native students heritage and traditions are respected and will always have a special place of honor in the school.

A ceremony was held recently at the school for the presentation of the war bonnet to the Parshall School District. Jacobi Jarski is a member of the Parshall School Board and she is honored and thrilled that the war bonnet is prominently displayed at the school. Jarski said the war bonnet was loaned to the school by American Legion Post 290 of New Town. The war bonnet was given to Post 290 by the family of the late Harry Gordon Beaks Jr. (Gildabi Awaxaadi Naagish – “Shining Buffalo”) of New Town. Beaks was a Marine Corps veteran who practiced and respected his customs and cultural ways. Beaks spoke fluent Hidatsa and was a well-known grass dancer.

“I am glad we’ve taken this step to integrate our native culture into our school. It’s been a long time coming and we’re working hard to provide many more cultural additions to the school,” stated Jarski.

The Parshall School District will be building a special enclosed glass case that will be set above the main trophy case for the war bonnet.

At the ceremony were several local veterans from the Beck-Shervan-Foreman American Legion Post 290 of New Town. Veterans Dave Siira, Jerome Jarski, Rusty Deserly and Brooks Goodall were on hand to present the war bonnet. The war bonnet was accepted on behalf of Parshall School District by Byron Young Bird who is a staff member of the school.