Remembering a Kind and Beautiful Soul

Elvia Rose Ramirez (Red Shield Woman) was honored by her family and Parshall High School on a beautiful afternoon in an amazing tribute to her kind and loving spirit.

Elvia was a unique young lady, and she always made a point to get to know the staff and fellow students. Every speaker at the ceremony, noted that she had a good spirit, and she was a fun-loving young lady. Elvia passed away on October 6th at the Sanford Children’s Clinic in Fargo from COVID-19. She was the youngest person to die from the virus in the state and she will be missed by many. The 17-year-old had just got fitted for her graduation cap and gown right before she became ill, but her spirit will be at the 2021 Parshall High School graduation on May 23rd. There will be an empty chair for her with a star quilt on it for her honorary diploma which her parents will accept for her.

There were several speakers at the memorial and that included staff, students, and family members. There were some emotional statements all through the speakers times at the 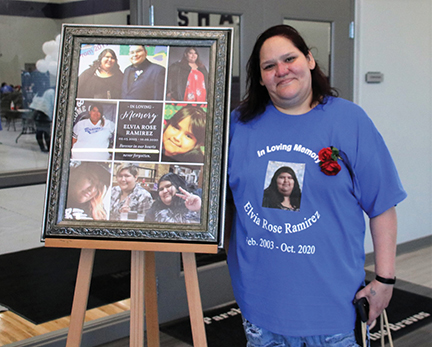 SUSAN THREE IRONS IS THE MOTHER OF ELVIA RAMIREZ WHO WAS HONORED AT A MEMORIAL. RAMIREZ WOULD HAVE GRADUATED WITH THE 2021 PARSHALL SENIOR CLASS 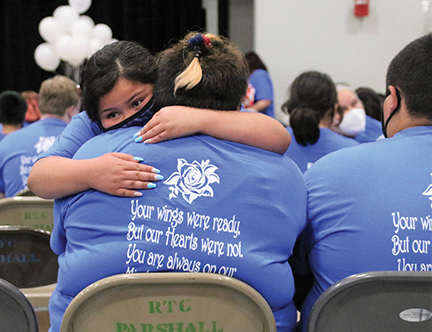 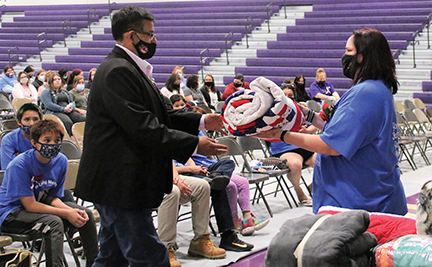 podium. Elvia’s cousin Johnny White Owl created a slide show and video for the ceremony that highlighted Elvia’s personality and love for life. There were some enjoyable moments in the slide show/vide that were shared of her life and creative soul.

According to family members, Elvia and her boyfriend Gabe Jaurez were always working the concessions at all the games. Elvia and her boyfriend were very close and had planned to go introduce him to her father’s family in Arizona. Her father Elias Ramirez of the Salt River Pima Tribe from Arizona. He will be at the graduation ceremony for his daughter. The cremation of Elvia was done, and her ashes are buried on her dad’s reservation. Elvia’s grandparents are Valerian and Mary Three Irons of New Town. She and her boyfriend Gabe Juarez planned to get married after high school graduation and then attend college together. She wanted to major in Native Studies.

“I got a headstone where her ashes are buried and I am going there in October on the anniversary of her passing,” said Susan Three Irons, the mother of Elvia.

Elvia was very responsible and organized and was very helpful, not only at school, but also at home. She guided her siblings and was their role model. She was like a “mother hen” towards her siblings and her mother said she loved her kittens.

“She would do anything for her friends and siblings, even when she was sick. When she was sick, she didn’t want anyone to worry about her. Elvia always kept it away from us when she was not feeling well. She wanted everyone around her to be happy,” said Three Irons.

At the memorial at Parshall High School, the family had a meal and balloons were let go after the meal.