A Marvelous Mural of MHA History 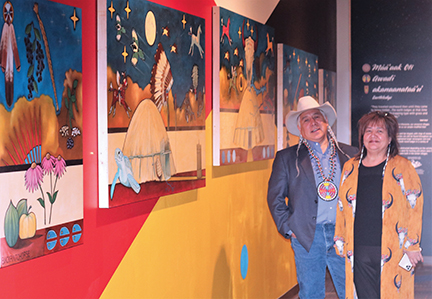 Artist Monte Yellowbird and MHA Interpretive Center Director Delphine Baker next to the art mural depicting the history and Creation stories of the Mandan, Hidatsa and Arikara

With the new MHA Interpretive Center officially opened with a grand opening this week, there are many amazing parts to enjoy and learn about the culture and history of the MHA Nation. One of those parts is a unique art mural that colorfully and respectfully represents the history, culture and stories of the Mandan, Hidatsa and Arikara tribes.

Famed international artist Monte Yellowbird recently completed a fantastically intricate mural project for the MHA Interpretive Center. Yellowbird owns the Black Pinto Horse Fine Arts Studio and is based in Rio Rancho, New Mexico. The Arikara/Hidatsa artist drove up in one day two weeks ago from New Mexico with the several canvas art panels that represent the ancient cultures of each of the three tribes that lived, survived and thrived off the land and great river. The five separate pieces of the mural that he transported to the MHA Nation came together with the backdrop of the colors of the medicine wheel.

Yellowbird took painstaking care to include all the elements of each tribe within the mural that is on a wall near the main exhibit hall at the MHA Interpretive Center.

“There are elements of the cultures in the mural, and I included much of the origin stories of each of the three tribes. There are the foods that each tribe mastered and lived on like beans, squash and the flowers, animals, plants and medicines,” Yellowbird explained. “Each of our tribes have an origin story that is sacred, and they all come from beneath the earth or a lake. In our Arikara panel, I added some flowers because my mother shared with me the story of how we are all flowers in God’s garden and the Creator walks through his garden and picks the flowers that are ready. So, when it is time for us to go, it means we are ready for the Creator.”

In the panel that represents the Mandan people, Yellowbird painted a medicine pole, earth lodge, a turtle, a root from underground where the first people came from in the Mandan origin story. In that panel, there is also the Knife River, a lone man amidst the village and the panel also represents how the three tribes came together physically and spiritually through a blue Lake Sacajawea.

In the Hidatsa panel, Yellowbird painted Spirit Lake where the Hidatsa originated from beneath in their origin story. That origin representation, along with an earth lodge, buffalo skull, and horses and Hidatsa riders are featured in the panel. There is also a sunflower and a herd of buffalo running in that panel that represents the sacred kinds of sustenance that the tribal people survived on to feed the people. 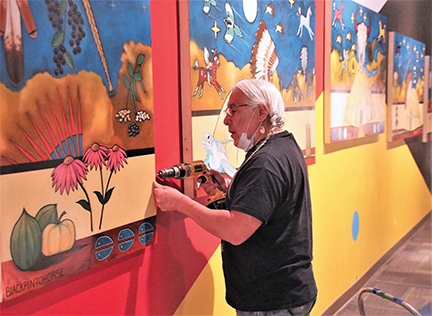 There are also two smaller panels that are on each side of the larger tribal panels. Those also signify the history of the Mandan, Hidatsa and Arikara.

MHA Interpretive Center Director Delphine Baker was excited to see the completion of such a creative project that adds another wonderful example of the MHA Nation’s history and culture. Baker emphasized that she is happy with the mural and what it means to the facility. Baker believes that the people will see a vivid visual of art that captures the essence of the MHA Nation and connection to the land and people all through the mural wall.

“The mural is a true representation of our relationship as tribal people to Creation and our history long before the white man ever dreamed there was a place like this. From Genesis to the present, Monte put all of that into the mural and we look at each part of the mural and see all of the elements and history of the tribes and how the native people have been here from the beginning of time with the Creation stories,” stated Baker.

A special article on the grand opening of the MHA Interpretive Center will be published in next week’s MHA Times.