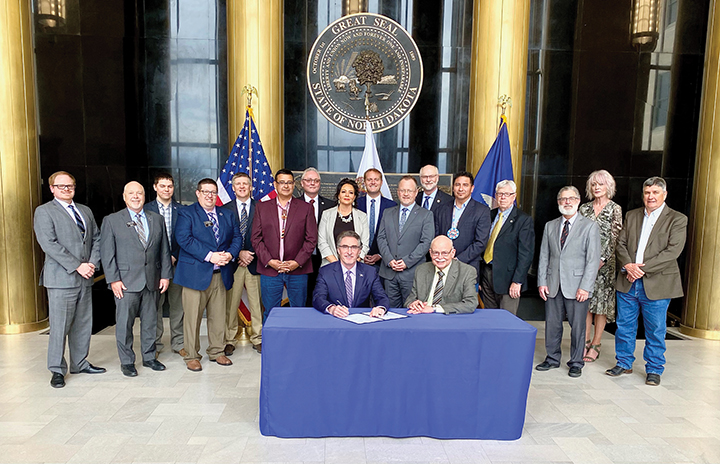 The MHA Nation saw the end to the journey of seeking its fair share of tax revenue from ‘straddle wells’ or ‘border wells’ off the reservation that have been taking oil by horizontal drilling. Senate Bill 2319 is now law and resolves the issue in a fair manner where MHA Nation will receive a share in tax revenue from those wells. There was some time to savor the victory for Tribal Chairman Mark Fox at a signing ceremony at the state capital in Bismarck last week.

Senate Bill 2319 was signed on Wednesday, April 28 in the North Dakota State Capital’s Grand Hall and will at last give the MHA Nation a fair share in tax revenue from oil extracted from those straddle wells. The event was a celebratory one for Chairman Mark Fox who offered his gratitude for the bipartisan bill when he spoke at the podium. The MHA Chairman recognized the close relationships he has forged with Governor Doug Burgum, Lieutenant Governor Brent Sanford and other state leaders during the many issues they have worked on in a respectful and beneficial way for the MHA Nation and the state of North Dakota.

“I want to thank each and every one of you who worked hard on this agreement,” stated Chairman Fox. “This is another major hurdle we got over collectively in developing this major trust asset for the people. We all made a choice to develop this asset – albeit a limited resource – and use the revenues for a reinvestment for the future of our Mandan, Hidatsa and Arikara people.”

Chairman Fox acknowledged the contributions of the MHA Nation Tribal Council, Tribal Tax Department, Tribal Legal Department and all the staff that did a lot of the “ground work” on getting the bill passed.

Senate Bill 2319 was introduced by Senator Jordan Kannianen (Dist. 4) and as the prime sponsor, he received many accolades from Governor Burgum and Chairman Fox. The bill was not an easy one to negotiate. However, after much testimony in the House Finance and Taxation Committee and MHA leaders, tribal tax department and legal department officials, both the House and Senate passed the bill overwhelmingly. SB 2319 passed in the House 79-13 and in the Senate 43-3. Chairman Fox emphasized that the continuous efforts made by the MHA Nation staff and supporters in the state legislature were key to the goal of the bill passing. One state legislator, Craig Headland, who is the chairman of the Finance and Taxation Committee stated that he did not envision himself standing at the podium and watch the signing of SB 2319. It was the open communication and will of the tribal leaders that brought the positive result, stated Headland.

Chairman Fox was focused on bringing the issue forward this legislative session and resolving the issue of straddle wells taking oil from under tribal and trust lands with horizontal drilling technology. It is estimated that the state has collected over $200 million in tax revenues from 132 straddle wells outside the Fort Berthold Reservation boundaries and the MHA Nation had not received any of that revenue that went straight into the state coffers. Chairman Fox said the MHA Nation was losing eight to 12 million dollars a year by not getting their share of tax revenues. The signing ceremony was a momentous occasion for Chairman Fox and the tribal leaders who have long worked and lobbied for the MHA Nation’s share and they always approached the issue as a partner with the state that would benefit all the MHA tribal members and all state citizens of North Dakota.

Governor Burgum stated in his address in the Grand Hall that the bill settles an unresolved issue from the 2019 tax agreement. SB 2319 will create a fair and reasonable framework for sharing tax revenues from straddle wells, Burgum noted.

“We are deeply grateful to Chairman Fox for his tireless efforts and collaboration on this agreement, as well as Senator Kannainen, Representative (Craig) Headland, (Tax) Commissioner (Ryan) Rauschenberger and many others who worked hard to bring this bill to a final form that enjoyed broad bipartisan support,” stated Gov. Burgum. “Legislation like this will continue to strengthen our state-tribal relations built on understanding and mutual respect.”

Also present for what was his last event as Indian Affairs Commissioner at the state capital was Scott Davis. Davis’ last official day was Friday, April 30 after 12 years as the liaison between the North Dakota tribes and the governor of the state. Davis is moving to a new position in Bismarck working for Sanford Health. Davis conveyed his feelings and some of his great memories of the dozen years he served three different governors in the challenging position he held. In his emotional farewell to the tribal and state leaders there, he stated that it was good to be a part of a positive event for the MHA Nation and the state exhibiting a strong partnership.