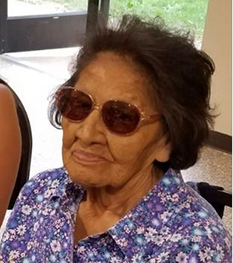 Miriam R Smith, “Eeca Hishi” (All Red), 88, of New Town, departed this world on Thursday, April 1, 2021 at a Minot hospital. Miriam was born on September 7, 1932 in Elbowoods, the daughter of Solomon Ray and Sarah (Yellow Wolf) Bird Bear; she was raised in Independence. She was a member of the Knife Clan, also child of the Knife Clan.  She was baptized in the Catholic faith. Miriam attended school at Independence, Sahnish, and graduated from Flandreau Indian School in 1952. She enjoyed nature, riding horse, helping her father in the garden, and enjoyed her animals. Soon after school, she married Jefferson “Buddy” Smith II and together they raised their 6 children.

She always stayed busy by working various jobs in New Town, including Northrup, Four Bears Motor Lodge, and the tribal daycare. As her family grew, she took up more part-time jobs, but always worked hard supporting her family.

Miriam had an adventurous spirit, she loved to travel, and she often talked about the time she visited her daughter who was stationed in Germany. She also loved to play bingo, solitaire, find rummage sales, attend powwows, and she was an incredibly good baker. She was very well read and had a large collection of National Geographic and Western Horseman magazines. She was very humorous and loved to tease her family and friends. She also spent a lot of time with her good friend, Trilby Deserly, having coffee, and speaking Hidatsa together. In her later years, she devoted herself to her grandchildren, Molly and Marc Jr.  She nurtured them, spending all her time with them, and taking them on adventures. She made regular visits to her grandchildren in Maine, New Mexico, and Arizona whenever she could.