Members of Legislature’s Bastiat Caucus don’t see themselves as extremists, but as principled Republicans

BISMARCK – The Bastiat Caucus, an unofficial, voluntary association of legislators within the North Dakota House and Senate, is often described as an extra-conservative subgroup of the Republican legislative majority. Members say they are just Republicans and adhere to the party’s principles.

The caucus, founded by Rep. Rick Becker, R-Bismarck, is named after Frédéric Bastiat, a 19th-century French economist and writer who believed in 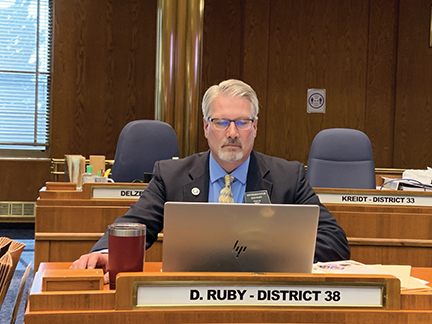 Rep. Dan Ruby, of Minot, is a member and former chairman of the Bastiat Caucus. . “It’s a group of friends and like-minded people that want to make sure we’re following the Republican principles and that’s all,” he said of the caucus.

small government and personal liberty. Becker said he formed the caucus to be better informed and to connect with people who believe in the same platform.

“I came in (to the Legislature) completely naive,” Becker said. “I thought I was coming into a group of like-minded people but it turned out I was on an island. And so I formed the group just to be able to have communications with people and so that I wouldn’t feel isolated and feel uninformed.”

Rep. Dan Ruby, of Minot, is a member and former chairman of the caucus. He said during the last legislative session, the Bastiats were a more formal group with membership dues and speakers at their weekly meetings. Now, they are focusing on discussion and education between like-minded lawmakers.

Ruby said there is no formal recruiting process and that anyone who agrees with Republican principles is welcome to join. He joked that there is no secret agenda or rituals being performed. He said meetings mainly consist of eating pizza and talking about bills.

“It’s just information about the bills,” Ruby said. “It’s a group of friends and like-minded people that want to make sure we’re following the Republican principles and that’s all. It’s pretty tame, really.”

While there is no mandated list of backed bills, Becker said the Bastiats generally vote for legislation that supports Second Amendment rights and reduced government spending and opposes what they see as federal government overreach, including claiming the state’s right to nullify certain federal actions.

But the caucus has been criticized for introducing controversial bills like HB 1476, which would prohibit the state from creating policies that respect LGBTQ+ identities.

Minority leader Josh Boschee, of Fargo, said he considers the caucus a giant distraction that does more harm than good.

“Their agenda and a number of extreme things they’ve proposed and advocated for have certainly been a challenge for us this session,” Boschee said. “We’re trying to address the public health and economic crisis that our state and the nation (are) facing and they’re worried about introducing bills about Ten Commandments in schools and transgender kids playing sports.”

Republican legislative leaders did not respond to requests for comment on their working with members of the Bastiat caucus. Last month, House Majority Leader Chet Pollert, R-Carrington, led the unprecedented move to expel Rep. Luke Simons, R-Dickinson and a Bastiat member, from the House for alleged inappropriate behavior. Simons, who was expelled when two-thirds of House Republicans voted with Democrats to oust him, claimed he was targeted because of his political views.

“It’s very ironic that sometimes even Republicans will say that we’re trying to damage the Republican party or that we’re not real Republicans when we are actually the ones most strongly advocating for the party platform,” Becker said. “If you think these other people are making you look bad because they’re sticking to the platform that you allegedly believe in, that makes you look really bad.”

Ruby said it is frustrating when people associate the caucus as being extremists or libertarians. He said Bastiats are just as, if not more, Republican than other lawmakers.

When asked about why some members chose not to publicly associate themselves with the caucus, Becker said it is to avoid being negatively targeted and labeled as an extremist. He said members are not ashamed of their beliefs or votes, they just don’t want the negative press.

“I’m used to being called names, being lied about and being torn down,” Becker said. “A lot of people just really don’t want that. They just want to come here and do their job, they don’t want their name in the press as a fringe radical trying to tear down the Republican party.”

As the leader of the super minority, Boschee finds it funny that the Bastiats are concerned about facing Republican opposition.

“As a super minority, we’re used to going up against some very tough odds and that made us better as a caucus and it’s made us stronger legislators,” Boschee said. “I guess that falls with they’re not serious with what they’re trying to do.”

Sen. Oley Larsen, of Minot, is the current caucus chairman. He said the group is focusing on rebranding and removing negative connotations associated with the Bastiats. By emphasizing their Republican values, Larsen believes the caucus is making a positive rebound this session.

“There has been a slow movement to come back and support those Republican platform values and this session very much embraced those issues,” Larsen said. “I find it very refreshing when I look up at the vote board and I’m not the lone vote on a lot of those issues.”

Larsen said the caucus has grown so much, it had to move to a larger meeting place. While he isn’t sure whether they will try to organize more formally for the next session, he said they will continue to educate those who want to learn.

“People are hungry for the knowledge and it’s unfortunate that the powers of the governor and the leadership have tagged us negatively because we are the Republican Party and we support those ideals,” Larsen said.