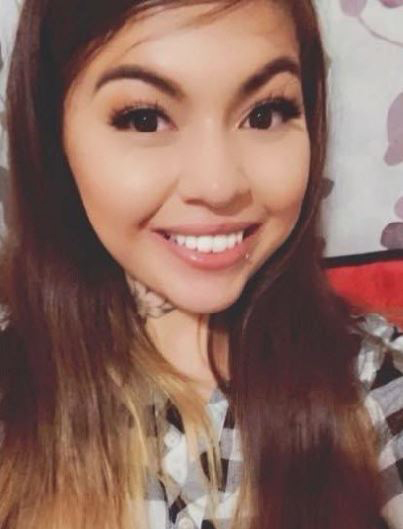 Mildred Raechell Stacy Bintliff was born on October 16, 1998, in Minot, ND, to Jeanette Smith and Mitchell Bintliff. She was given the name “Saawiitakaa Sapat” (Butterfly Woman) by her late uncle, Eric Smith Sr. Mildred was known to family by her nickname “Ugly” which was given to her by her late grandmother, Shirley Smith. She had many nicknames; her mom called her Boo-Boo and to many she was known as Raechell.

Raechell was raised in Rapid City, SD until she was four years old. Her family relocated to New Town, ND. She attended Edwin Loe Elementary and New Town Middle School. During her high school years, she was homeschooled by her mother until transferring to Quentin Burdick Job Corps in Minot.

Mildred’s hobbies included pow wowing with her grandmother where she danced jingle. She also loved singing, especially to Beyonce songs. She always had friends around her and brought them to her home. Her personality attracted you to her; she was very charismatic, loving, caring, and effortlessly funny.

Mildred had a huge soft spot for animals, loved animals of all sorts, and wanted to be a veterinarian. All the pets she has ever owned she found outside, and took them in. One of her cats she named “Blacky” was found when dogs were trying to attack it; she went over and jumped on top of that cat and covered her with her body to protect her. Another saved from outside was a small dog, she named “Zelda”, was attacked, blind in one eye and ran over by a truck; the dog was very malnourished and had patchy fur. She saved many animals brought them home, and sometimes kept them or found new homes for them.

Raechell attended a treatment center in Tucson, AZ. She brought her kitten “Smokey” who she found in Minot with as a support animal. When she came home, she wasn’t able to bring the kitten. When she returned to Arizona a few months later, the cat was still there and excited to see her. When Raechell completed the treatment program the cat stayed and is now the mascot at Amity in Tucson, AZ.

On March 24, 2021, Raechell lost her battle with addiction and was called home to the spirit world and greeted by her brothers, Mitchell Bintliff Jr., Mathew Bintliff and Samuel Smith; nephews, Tuff and Wyatt Smith; uncle, Eric Smith Sr., grandparents, Eugene and Shirley (Gillette) Smith, and great-grandmother, Mildred Bintliff, whom she is named after.

The family will then travel to South Dakota for a Funeral: Monday, March 29, 2021 at 11:00 a.m. in Destiny FourSquare Church, Rapid City, SD with Burial at Mountain View Cemetery, Rapid City, SD.