Testimony in favor of an important senate bill was given last week by MHA Nation Tribal Chairman Mark Fox in a committee hearing at the state capital. Senate Bill 2319 directly relates to the MHA Nation, its economic stability and sovereignty as a tribal nation.

Chairman Fox and several other individuals testified in support of the ‘crossover bill’ with the condition that original amendments be reimplemented that had already been agreed to instead of some amendments that were made to the bill after the tribe reluctantly agreed to wait until this legislative session for the issue to be resolved. There were no testimonies given in opposition to SB 2319 as proposed by the MHA Nation. 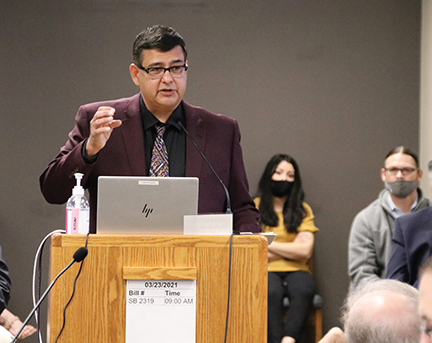 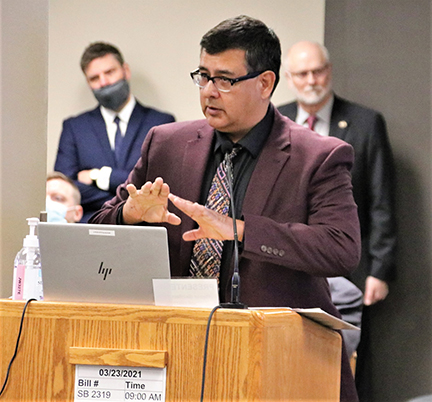 District 4 State Senator Jordan Kannianen was first to the podium to brief the North Dakota House Finance and Taxation committee on why the bill should be passed in its current amended form. Sen. Kannianen told the committee that the Three Affiliated Tribes does not agree with a previous amendment to the bill that eliminated a two year sunset clause and delayed the effective date for two years but that the tribal leaders support putting the bill back in its original form.

The fact is that the MHA Nation does not agree with the amendment placed in the bill because it was done without the tribes knowledge and that amendment delays an effective date on the bill where the tribe would be able to receive their fair share of tax revenues. This proposed SB 2319 bill is seeking to reach agreements between all parties in an equitable way for MHA Nation. Also at issue was a decision by the Biden Administration to halt oil and gas drilling on federal lands, whereas the MHA Nation has received an exemption from those restrictions from the Biden Administration executive order, noted Senator Jordan Kannianen.

The latest version of SB 2319 has been introduced to correct severe inequities between the state and MHA Nation regarding oil and tax agreements, stated Chairman Fox in his testimony to the House Finance and Taxation committee.

Fox stated that whether any wellhead extracting oil and gas is off or on the reservation, the tribe should share equally on the production taxes that comes from those border/straddle wells that use horizontal drilling to extract oil and gas that lies under tribal and trust lands.

“We come in support of the senate bill with the condition the amendments that were originally agreed to be reimplemented and not the two (amendments) that came later. Put simply, if a (straddle) well extracts oil and gas from within the reservation, it needs to be part of the agreement,” stated Chairman Fox. “Since 2008, the border/straddle wells have generated over 200 million dollars in production and extraction taxes – 31 million in the last biennium alone.”

The MHA Nation tribal chairman informed the committee that the original bill from within the reservation in it needs to be part of the agreement whether or not the wellhead was on or off the reservation. According to Chairman Fox, there are currently 132 wells that extract oil from under reservation lands using horizontal drilling technology. Chairman Fox stated that the scales are already tipped in the state’s favor despite the MHA Nation doing its best to be a good partner with the state and the counties that are part of or near the reservation.

“We cannot allow the deprivation of revenue from these wells to continue. This is very important. When we come here asking in sharing tax there is a misperception that we are asking for tax revenue from the state. That (revenue) does not exclusively belong to the state. By federal law, we have the right to tax that just as you have the right to tax that. So, it is a shared ownership, a shared ownership that is left out of the agreement and not include (MHA Nation) to the extent of over 200 million dollars. That misperception is a critical thing. We are asking for revenue that belongs to both of us (tribe and state) that can be shared equitably. End of story. We lose between eight and twelve million dollars a year and that effects our budget more than yours. This is a fairness issue. Border wells are excluded from this agreement even though the majority of the oil and gas comes from the reservation and there is no legitimate reason not to include these wells in the agreement. We simply asking for a fair distribution of production revenue from our res to build our infrastructure and provide services.”

Without an agreement, Chairman Fox stated that the MHA Nation has the right to tax all production from tribal trust lands. Chairman Fox said the fact that the tribe has not received any revenue generated from those border/straddle wells is a historic injustice that must be corrected. Of the over $200 million generated from horizontal drilling and extraction, all the tax revenue has gone to the state and not a dime has gone to the MHA Nation. Chairman Fox emphasized that tribal infrastructure is used to service those border wells.

“If we work together, we can find ways to avoid production slowdown. Chairman Fox emphasized that the MHA Nation cannot wait for another two years. Additionally, MHA Nation has paid property taxes historically because the tribal leaders feel that all of the people are in this together.

MHA Nation is strong in its conviction to come to an equitable agreement between the state and tribe regarding straddle wells and federal lands issues.

“Our oil and gas producers support SB 2319 because it will provide more stability for everyone. More development will be beneficial for all parties and we already demonstrated we are good allies,” said Chairman Fox. “Oil and gas are trust assets and are maintained and held in trust for the tribes. We have a position to advocate that you cannot stymie the development of our trust asset. In doing that, we develop not only on trust lands, but also on all lands on the reservation. What happens when we do more energy development, more, you (the state) get more revenue and we (MHA Nation) get more revenue and we want to avoid dual taxation. If we don’t get an agreement, that is exactly what you will have.”