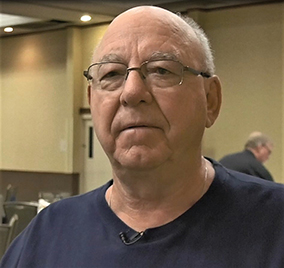 Five years ago, I nearly lost my life to leukemia because I couldn’t afford my medication.  Even though my doctors warned me the cancer would return if I didn’t take the medicine, I did not fill my prescription because I couldn’t afford the $2,400 a month co-pay.  Luckily, I found the same medicine at a more affordable cost of $680 a month through a Canadian pharmacy.

My story is shockingly common. Surveys have found that one in three adults did not take a medication as prescribed because of the price. There have been several high profile stories of people dying because they could not afford insulin. No one should be forced to make these horrible choices. That is why I share my story and have been volunteering with AARP to urge both our state and federal legislators to take action to lower prescription drug prices.

For decades, drug companies have raised drug prices with impunity. The average annual cost of widely used brand name prescription drugs more than quadrupled between 2006 and 2018.

For too long, drug companies have been price-gouging seniors and hardworking Americans. Consider insulin, used to treat diabetes, which often costs hundreds of dollars per month. Insulins are hardly new to the market. They were invented nearly a century ago, yet modern formulations remain under patent thanks to drug makers manipulating the system.

Insulins are far from the only example of drugs with high and growing prices. For more than a decade, brand-name drug price increases have exceeded inflation by two-fold to more than 100-fold. Launch prices are skyrocketing as well. We are now seeing drugs enter the market with seven-figure price tags.

Some drug manufacturers claim that high drug prices are needed to support innovation. However, research has consistently demonstrated no correlation between drug prices and innovation. Further, more than three-quarters of drug patents awarded in recent years were for existing drugs that had been recycled or repurposed.

The root cause of the problem is clear: the high prices of prescription drugs are set by pharmaceutical companies when they first come on the market, subsequently increasing year after year.

Drug manufacturers’ outrageous pricing behavior has real consequences for people like me. Some trek to Canada, while others risk their lives by rationing or skipping doses. A recent survey by AARP found that 44 percent of North Dakotans who stopped taking a prescribed medicine did so due to cost. This staggering number hinders our ability to improve health outcomes without a doubt.

It is not just patients being affected by drug company pricing practices: each of us is already paying for skyrocketing drug prices. We pay not only at the pharmacy counter, but through higher insurance premiums and higher taxes we pay to fund programs like Medicare and Medicaid.

Americans over 65 are hit especially hard. Enrollees in Medicare’s prescription drug program take an average of more than four prescriptions, and their average annual income is around $26,000. One in three Americans has not taken a medication as prescribed because of the cost.

Meanwhile, drug companies are fighting for the status quo and blocking needed improvements to the system that could bring relief to seniors, families and small businesses. Pharmaceutical industry lobbyists are at the N.D. State Capitol telling legislators that more affordable drugs will harm consumers.

There are four bills before the North Dakota Legislature that offer solutions.

House Bill 1032 is an important building block for other legislative efforts that can more directly address prescription drug costs. This transparency bill would require pharmaceutical companies to provide information about how a drug is priced, and to justify large price increases.

The simple truth is medications do not work if patients cannot afford them. It is far past time we put an end to drug companies’ anti-competitive behavior.

We cannot afford to continue to pay the highest prices in the world for prescription drugs. Thankfully, the North Dakota Legislature has an opportunity to help North Dakotans with the passage these four important pieces of legislation.