BISMARCK – Besides being a state representative for District 20, Mike Beltz is a farmer from Hillsboro who takes pride in his small community but also likes to travel.

Raised on a farm, Beltz said he always knew that farming was what he wanted to do. After getting 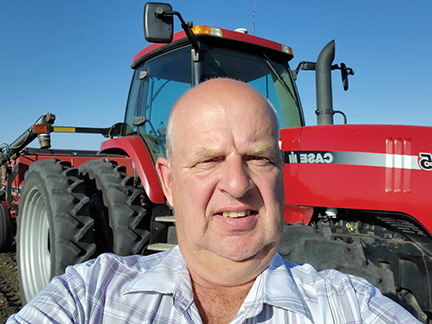 District 20 Representative Mike Beltz, R-Hillsboro, has brought his passion for farming to the legislature.

his degree from NDSU, he farmed full-time, growing wheat, corn and soybeans.

While in college, Beltz filled in as assessor for Caledonia Township. That led him to look for more opportunities to get into public service, and in the 2000s he started getting involved with local, state and national agricultural boards and organizations, including dry bean and soybean councils, the Agriculture Issues and Government Affairs Commission, the state Board of Agriculture Research and Education, the North Dakota Farmers Union and the North Dakota Farm Bureau.

“I caught the disease for public service,” Beltz said.

“Farmers and ranchers are businessmen, but we’re hardwired in our DNA to care for things whether it’s crops and critters. It’s not much of a stretch to extend that to people.”

Beltz saw the legislature as another chance to serve his community and state. While he considers himself an introvert, he is outspoken about things he is passionate about, which includes agriculture and education.

Beltz said agriculture is vital to the state. He advocates for agriculture research and supports bills like SB 2020, which involves budgets for the North Dakota Agriculture Experiment Station and NDSU Extension programs.

“I think people tend to take it for granted and I would urge people not to because the agriculture industry has never been bigger than it is now,” Beltz said. “Without it, we wouldn’t be where we are today.”

Beltz said his background in farming helps give him a different perspective as a lawmaker. The lifelong resident of District 20 said coming from a rural area helps him have a better understanding of his community.

“People, in general, are resistant to change, but as farmers, that’s how we survive,” Beltz said. “If you don’t change and adapt, you just don’t survive on a farm.”

Rep. Jared Hagert is another farmer from District 20 who ran with Beltz. He said they have a good working relationship.

“Mike is a great individual,” Hagert said. “He’s a hard worker. He gets into the issues and makes sure he understands them and votes for the district based on the knowledge that he has.”

Beltz is a member of the Agriculture and Human Services committees. He said there were a lot of things he had to get used to at the Capitol. Now that he has a rope on things, he hopes to make a difference while he is there.

“It’s a steep learning curve in those first months,” Beltz said. “Everything is new but it is interesting. There’s always something new going on and you’re constantly learning, and that’s a pretty cool part of it.”

House Majority Leader Chet Pollert said he has talked to Beltz about agricultural issues and looks forward to working with him in the future.

“Representative Beltz is highly knowledgeable in the area of agriculture,” Pollert said. “His experience in farming and his work with (state ag research groups) is highly valuable for the House.”

Beltz is in the process of retiring from farming. At this stage in his life, he said, it’s a good time to make the transition. He now looks forward to working with fellow lawmakers and serving his state.

“The quality of people you get exposed to at this level is pretty incredible,” Beltz said. “We are blessed to live where we do and have the people that care like they do.”