BISMARCK – In his Tribal-State Relationship Message at the start of the 2021 North Dakota Legislative Assembly, Three Affiliated Tribes Chairman Mark Fox called for more communication between the state and tribes. With more than half of the 80-day session complete, Fox 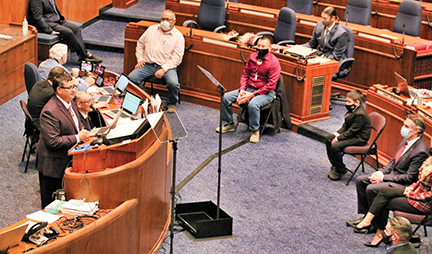 said last week there appears to be more cooperation, but there is still a long way to go.

“It looks like we’re making some progress, but in other matters we are struggling,” Fox said.

On the positive side, the state and four tribes have been working on ways to improve response time for law enforcement on and near reservations by clarifying jurisdictional issues. A bill with that aim passed the House 82-10 Jan. 20.

“You’re happy to see backup no matter what color a uniform is,” Trooper Jenna Clawson Huibregtse, the state Highway Patrol’s cultural liaison officer, told the Bismarck Tribune in January. “There shouldn’t be that issue of whether somebody can come help me or not because they have authority or they don’t.”

One of HB 1126’s sponsors is Rep. Terry Jones, R-New Town. “Absolutely yes, we had a real good lobby here from the tribe that’s been working on this and a lot of cooperation from the state to try and figure out how to get help both ways,” she said Friday. “So this is a definite step forward in my opinion. It will serve the citizens of North Dakota well.”

One area of concern is proposed expansion of the gaming industry. Since the pandemic, tribal casinos have seen a major loss of jobs and revenue. Fox said expanding gaming throughout the state would crush those tribal gaming operations even more.

“When one entity is extremely benefiting by an expansion of gaming, there’s nothing wrong with improving for their purposes and benefits, that in general is a good thing,” Fox said. “We’re not saying that it has to be only the tribe, we’re just saying find a balance.”

Rep. Jason Dockter, R-Bismarck, is a member of the House Finance and Taxation Committee and sponsor of several bills relating to the expansion of the gaming industry. House Bill 1234 would authorize sports betting as a game of chance.

Dockter said he doesn’t feel that there is tension between the state and tribes over gaming bills. “We’ve had great communication up until then, we just haven’t agreed on anything yet,” Dockter said. “We understand where we’re coming from and we understand where they’re coming from, but we still have to continue to work at it to see if we can come up with a compromise.”

While there have been several productive meetings and conversations, Dockter said, a number of issues remain. But with half of the session left, there is still plenty of time to work on those.

Now that the Biden Administration canceled construction of the Keystone XL Pipeline, Washington also has been urged to shut down the Dakota Access Pipeline, against which many Indians protested in 2016-17. Because of this, Davis said some lawmakers might be supporting these gaming bills in part as retribution.

Morton County Sheriff Kyle Kirchmeier, who led the police response to the protests in 2016, said he feels the relationship between the sheriff’s office and Standing Rock Sioux Tribe is one of mutual respect.

Kirchmeier said while there is still tension around the pipeline, it does not involve the sheriff’s office as it is a neutral party. He said during the protest, its conflict was with the out-of-state protesters who instigated illegal activity, not with Standing Rock.

“We understood the passion behind the tribe’s feelings about the pipeline, and we were willing to work with them to conduct peaceful protests,” Kirchmeier said. “But when mostly out-of-state agitators arrived and refused to cooperate and protest in a legal manner, that’s when there were issues. My office is here to serve Morton County, and neighboring counties are just that, our neighbors. And we value those relationships.”

Fox said he would like to see more cooperating and understanding between leaders in the second half of the session. With the potential loss of livelihoods on the line through gaming expansion beyond the reservations, he hopes that a compromise comes sooner rather than later.

“I hope to see some progress because we have to get these things done now,” Fox said. “Since they meet every other year, we don’t want to find ourselves in a position with the same old problems and contending with them for another two years until they come back again. This time, we simply can’t wait.”