Queen of the Mat in Montana

In what was a moment of sheer exuberation, the referee raised the arm of Sophie Dulin and then she let out a yell that all heard across the auditorium. The victory cry from the MHA tribal member came from deep inside, the same place that she has taken her passion for competition to new heights. As the newly-crowned state champion of the state of Montana high school wrestling, Dulin is hungry to earn more on the wrestling mat now that she has found her path in athletics and no sport can challenge a person like wrestling. The sport is the first competitive athletic sport in human 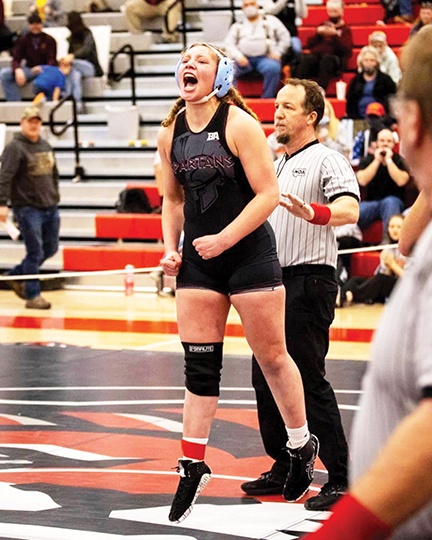 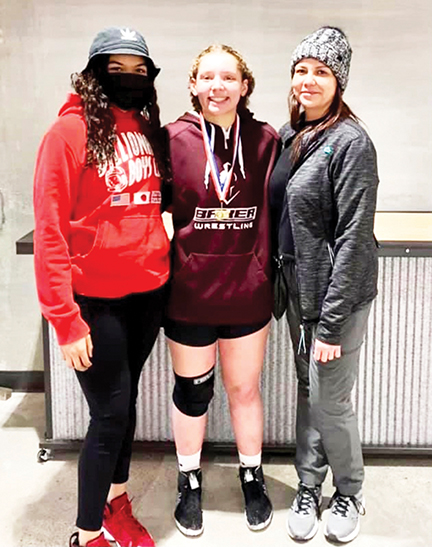 Sophie Dulin surrounded by teammates after the championship

history. Wrestling was the first sport of the very first Olympiad in Greece many centuries ago. Dulin is fired up after achieving her goal to win the state championship in the 170 pound division and she is eager to learn more and do more in the sport. Her memories of the past year in wrestling are unique and is something to be proud of, although it came quickly and somewhat surprisingly.

Dulin was on the basketball team, but it wasn’t working out with the coach at Baker High School, so the senior decided to give wrestling a go. Her decision paid off in a very big way. Through the season, it was obvious that Dulin was a natural and could do well on the mat in girl’s

wrestling. Dulin wants to pass on her passion for the sport to friends and family.

“I tell my little brother, Lennox that he can do it just like I can. I encourage into a wrestling program. Its hard work but it’s all worth it,” said Dulin.  The MHA tribal member says she is a little smaller but quicker than most of her opponents and she has built up great stamina through a tough training regimen each week.

“Going from basketball to wrestling was hard for me to decide but I got into the room with my AAU coach and I started to get into it. It ended up being a good change I was super nervous my first match and each meet there was just my teammate and I who were the only girls and I would have to wrestle boys. A lot of my matches were against boys. Wrestling is pretty big here in my town. I know a lot of younger AAU wrestlers who could be champions and I encourage them to keep working and now at practices three of 12 are girls at AAU and now in the Baker middle school there are 7 girls and 3 are boys,” said Dulin. “I would like to thank all of my coaches but it was the assistant coach, Derick Gorder, who got me into the sport.”

Hailey Hoffmann from the western side of the state was the number one seed in the state tourney and both Hoffmann and Dulin undefeated before the match.

“We had a good face off and she strolled out confidently. She was 11-0 and I was 2-0 in girls wrestling but I was watching her all season,” recalled Dulin. For the year, Dulin entered the state tournament in Lockwood, Montana with an overall record of  11-2 and for state it was 4-0 as she racked up three easy wins on her way to the finals.

In the first period of the finals, neither wrestler scored a point as they jockeyed for an advantage. In the second period, Dulin put Hoffmann on her back and scored some points. In the third period, Dulin had built up a comfortable lead and then hung on for the huge victory of 11-9. Dulin now plans to wrestle for the women’s wrestling team at Providence College in Montana where she will major in biology and ecology.  She is the daughter of Lori Henry of New Town and Jason Dulin.