Rep. Luke Simons, R-Dickinson, was expelled from the House of Representatives 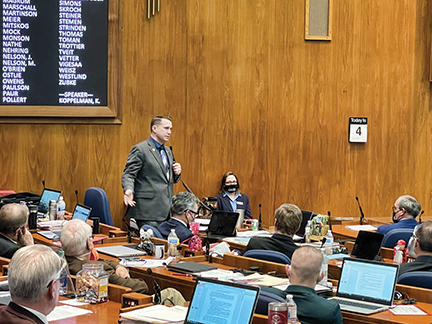 BISMARCK – After three hours of emotional debate, the North Dakota House of Representatives voted Thursday, March 4, to expel Rep. Luke Simons, R-Dickinson, by a vote of 69-25.

The House convened as a Committee of the Whole, something that hasn’t been done in decades, to debate whether to expel the three-term representative. A vote to expel a member of the House needs a two-thirds majority to pass, which it received.

Debate on the expulsion resolution, sponsored by the chamber’s majority and minority leaders, began with personal testimony from Rep. Brandy Pyle, R-Casselton, who detailed comments Simons had made toward an intern in a committee room.

“His comments that day made me uncomfortable, and our intern as well,” she said. “Comments like, ‘I would like to put my hands through your hair,’ were directed at a young 20-year-old lady.”

Simons, a barber, said later that his remarks were part of a professional assessment and recommendation.

Some of the accusations against Simons were listed in documents released the previous week by the Legislative Council, including a report that he had said that thoroughbreds have a “hungry look in their eye just like women.”

During some of Pyle’s comments, Simons smirked, looked bemused and winked at members of his family who were in attendance.

“This is not easy,” she said. When she appeared on the House floor in a particular dress, “Rep. Simons looked me up and down and asked, ‘So what are you wearing today?’” O’Brien said she was humiliated when Simons made the comment in 2017, and due to that and other comments she moved her desk across the House chamber.

“Every time I go to pick out a dress to wear, I am reminded of the empty stomach feeling I was left with that day when those words left his mouth,” she said.

Simons also made numerous comments asking who was taking care of O’Brien’s household duties while she was at the Capitol, she said.

O’Brien said she was getting nothing from coming forward and wanted to do so to help other victims have their voices heard in the hope of fostering a safe working environment.

Allegations against Simons came to light last week after he told Rep. Karla Rose Hanson, D-Fargo, to “f*** off” after she told him to follow cafeteria rules by wearing a mask.

Simons apologized to Hanson for using profanity but not for his position against wearing a mask.

Several legislators argued against expulsion, saying they believed Simons had not received due process. They said a formal investigation should be held before the House took such a grave step – the first of its kind in North Dakota, apparently – and that House rules required it.

Rep. Ben Koppelman, R-West Fargo, said the assembly can’t just follow the rules it likes, but must follow all the rules. “Due process can never be considered a distraction,” he said. “Follow our duty to not consider expulsion based on accusations on harassment or misconduct, that are uninvestigated and thus unproven.”

Rep. Rick Becker, R-Bismarck, argued against expulsion as well, but he noted he was not dismissing anything people who spoke in favor of the resolution said.

“My concern is with the process we have at hand, and with the expulsion,” he said, adding that the matter has been hurried and politicized. “This is so serious, it is unlike any type of bill that we normally have,” he said.

When he took the floor in his own defense, Simons asked the chamber what he was being accused of.

“Due process, that is what I ask for today,” he said. “I want all the truth to come out.”

Now anyone can be guilty by association, Simons said. He didn’t call anyone a liar, but without opening up a hearing, lawmakers would never know the truth, he said.

Amendments were proposed to change the resolution from an expulsion to a censure, or a censure with added punishment. All failed.

Majority Leader Chet Pollert, R-Carrington, said expulsion was the final response to a pattern of behavior.

“It is about someone who was given multiple chances to avoid being in this situation,” he said. “I made numerous attempts to work with Rep. Simons to resolve problems informally … Unfortunately, he ignored warnings and continued to violate social norms.”

An attorney retained by Simons said they were looking at appealing the House’s action in state court, up to and including the North Dakota Supreme Court.

Simons posted about the proceedings on his representative Facebook page after the vote.

“Well that’s it, no hearing, no trial and no evidence. Just based off of accusations that were made, I was expelled from the house and now I’m out of the legislature,” the post read.

After the vote, Pollert said he viewed the assembly as brothers and sisters and this was not a procedure he liked going through.