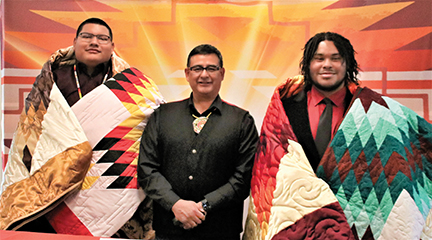 The MHA Nation has produced many elite athletes in its storied past in every sport. Last week, two of those young warriors signed their official letters of intent to play football at North Dakota State College of Science in Wahpeton, ND. Both are MHA tribal members and graduates of Shiloh Christian High School of Bismarck. Dylan Finley and Stephan Packineau were both stars on the defensive and offensive lines for the Skyhawks and they were “godsends” to the football team, according to the Shiloh Christian head coach. Before the official signing of Finley and Packineau occurred, there were many words of praise and encouragement from the two young student-athletes coaches and from Tribal Chairman Mark Fox. 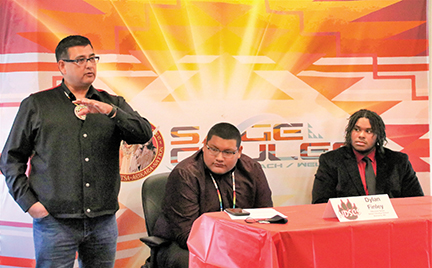 “Many of our MHA athletes have gone on to national and world-wide recognition in so many different sports,” stated Chairman Fox. “I am so very proud we are carrying on the tradition today of excelling in many different ways and these two gentlemen are about to do that and continue that tradition.” Diesel technology

Chairman Fox noted that his father Isaac Fox attended Wahpeton School of Science for one year so he feels a great connection to the two MHA tribal members he honored last week.

Dylan Finley is the son of Kevin and Edith Finley of New Town and credits his parents for their inspiration and guidance throughout his life.

“I am who I am because of them and I just want to thank my parents for being such great models and being supportive in all I do,” said Finley. Finley was named the Skyhawks best offensive lineman for the 2019-2020 season and this year Packineau won that team award. Finley appreciated his honoring at the Sage Coulee Outreach and Wellness Center in Bismarck last Thursday where the signings took place. “I’m still taking it all in and looking at making sure I 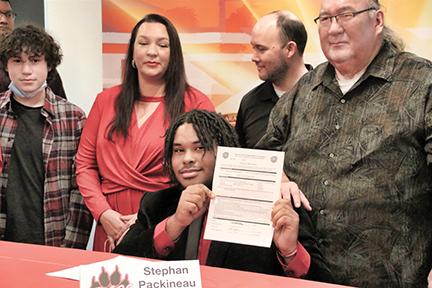 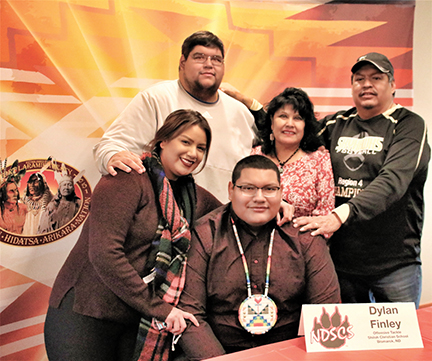 Dylan FInley and family after his signing ceremony at Sage Coulee 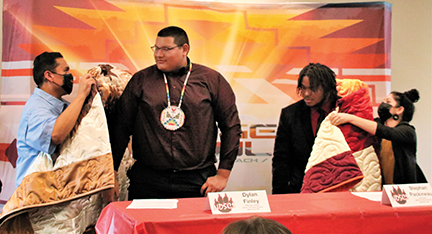 keep working to be a good student and athlete.” Finley had a strong football upbringing with his father Kevin Finley being a long-time coach for the New Town Eagles and a former football standout in high school and college.

“My dad always wanted me to move to the next level. When the quarterback from Shiloh met me at a UND football camp and he wanted us to play for him, that’s when I moved to Bismarck. Th at quarterback needed protection and the team wanted a stronger defense, so it worked out for everyone,” said Finley.

Finley has high hopes of making the starting unit at NDSCS this coming fall and will major in diesel mechanics technology/technician. His dream is to play football for the Minnesota Vikings one day.

The parents of Stephan Packineau are Tamara (Packineau) and Jorge Torres. Tamara Torres is originally from Parshall. The soon-to-be NDCSC lineman and student has great plans and will continue what has been a great journey on the gridiron.

“I came to Shiloh Christian before my junior year and it’s been a great school. Right now, I look forward to playing in the Shrine All-Star Game on June 16th in Fargo at the Fargodome. Dylan’s dad, Kevin Finley, told the coaches at (NDSCS) about me and that is how they got interest in me,” Packineau revealed.

“I prefer defense but a lot of the coaches like me over on the offensive side too. The dream I have is that I would love to play for the Vikings one day. I love the sport and didn’t really start playing until I came here to Shiloh Christian. I remember the first game I came back from having COVID and I was out for a week and a half. We played Kenmare and I had the most tackles on the defense and that was the first round of the class A playoffs. That is my most memorable game because of not being at full-strength, I helped my team beat the Honkers,” said Packineau.

Shiloh Christian ended up losing to Bishop Ryan in the second round of the playoffs this past year, but all in all, Packineau believes it was a successful season.

Packineau will be studying for a degree in criminal justice at NDSCS. He was amazed at the ceremony last week because of the many who came and honored him.

“Truthfully, I wasn’t expecting that many people to show up but I really appreciate they all took the time out of their busy days to attend the signing for me and Dylan,” said Packineau.

Skyhawks Head Coach Funnon Barker said he enjoyed coaching the two young MHA tribal members. Coach Barker was one of the speakers who provided appreciative words for Finley and Packineau and what they brought to the Skyhawks football program.

“They are two outstanding young men from two different great families and a privilege to coach both of them these past years,” said Coach Barker. “I think they both have high potential and you don’t find kids with that size and strength very often. They have very high ceilings and they will surely continue their hard work in the college level.”

Chairman Fox and Councilwoman Monica Mayer M.D. both gifted the two young men with star quilts and blankets and there was a meal provided for all the attendees. Chairman Fox provided words of encouragement that he hopes they will take with them to a successful future.

“I want to say this to these fine gentleman – Mr. Finley and Mr. Packineau. I am very proud of both of you and your families,” Chairman Fox told the two football stars. “This path you’re on right now is part of a new beginning and everything in life is a stepping-stone, whether it’s from kindergarten to becoming graduating seniors and now you are going on to college. Why is that so important? You never know what life has in store for you and sometimes you fall from those stepping-stones, but you have to get up and dig in. If you keep this in perspective and if you believe in yourself, you will succeed tremendously and you will continue to make us proud. You also have to remember that God made you special and gave you a gift and God’s plan for you on those stepping stones has already been decided.”