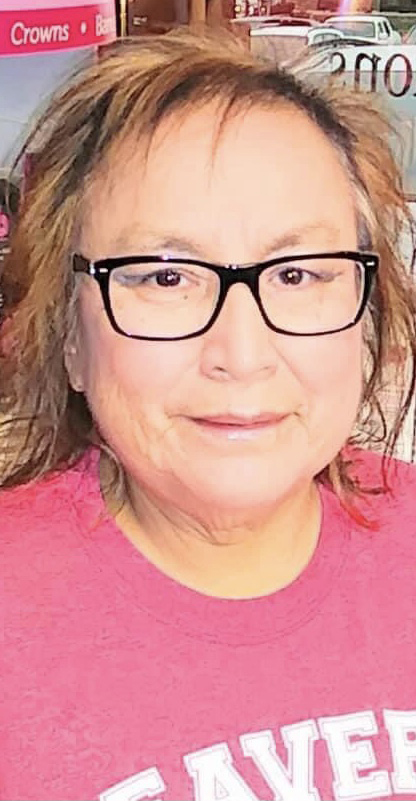 Lonely days and lonely nights, Filled with despair, Caused me to long for Someone to care;
Then I heard Christ say to me;
“This promise I’ve made: Lo! I am with you Now and forever, Be not afraid.”

If you’re longing for a friend, Loving and true, Turn to the Savior He waits for you;
He will do the same for you As He did for me; He’ll never leave you, Never forsake you,
Trust Him and see.

Irene Stevenson went home to the ‘Other Side Camp” on Wednesday, January 20, 2021 in Hardin, Montana with her family by her side.

Irene was born April 6, 1951 in Old Sahnish that is now under the water near New Town, North Dakota.

Viewing at Bullis Mortuary 10 am-3 pm

Wake (all night) *Immediate Family Only

Feed & Giveaway following burial at her home in Hardin MT

Her father was Wilbur Stevenson from Shell Creek of the Hidatsa Tribe of the Fort Berthold Indian Reservation and her mother was Etheline (Hogan) Stevenson from Benteen, Montana of the Crow Indian  Reservation.

On her mother’s side she is a descendant of Pretty Shield and Goes Ahead of the Crow Tribe from the Crow Indian Reservation.

On her father’s side she is a descendant of Adlai Stevenson a Xo’shga Hidatsa Band Member and US Hidatsa Scout also known as “Bear in the Water” of the Hidatsa Tribe from the Fort Berthold Indian Reservation.

She was raised by her paternal grandparents Rufus and Winnie (Turtlehead) Stevenson, her favorite auntie/mother Caroline Stevenson and aunt Olive (Stevenson) Beaks.

She was also raised on the Crow Indian Reservation and spent time with her maternal family in the Benteen area with her grandparents George and Mary Ann Hogan, throughout the years she also spent time with the Alma Snell, Emma Yellowmule, Evelyn Bearground, Loyd Sr Hogan and Mamie Knows His Gun families.

Irene was a devote Catholic and read her Bible everyday. She loved to listen to Rev. Jimmy Swaggert and watch Shepherd’s Chapel.

She loved her family, especially her grandchildren. She made trips throughout North Dakota to visit with them and always brought each one of them a special gift.

She was generous and ever ready to help a family member in need. She went out of her way to make sure those around her had everything they needed especially during times of family hardships.

Irene was a traveler and loved to visit new places, but really she just liked getting in the car and taking off on a road trip.

Irene was a beader, and a shawl & jewelry maker; her handmade items are precious family treasures.

She enjoyed going to pow wows and was proud to dance in honor of her father Wilbur and brother Terrance Stevenson who were both war veterans. She proudly danced with her American Legion Auxiliary shawl. She was a lifetime member of the American Legion Little Shell District Auxiliary Unit #300 of the Fort Berthold Indian Reservation.

Too many numerous great   grandchildren to name.

On her mother’s family side:

On her father’s family side:

By her parents Etheline (Hogan) & Wilbur Stevenson, her siblings

Our family is large, if we have forgotten anybody please accept our Apologies during our time of grief.

Funeral arrangements have been entrusted to Bullis Mortuary of Hardin, Montana.