Honoring the Flags of Tribal Nations at UND

The MHA Nation was part of a historic moment last week in the Justice Gerald W. VandeWalle Courtroom at the UND School of Law. The native drums sounded throughout the opening ceremony as the tribal flags were brought in by native veterans from 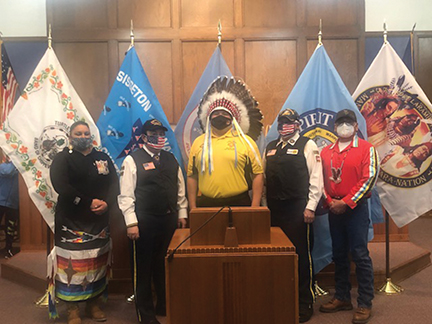 Tribal representatives after the installation of all five flags

Mandan, Hidatsa, & Arikara Nation, Turtle Mountain Band of Chippewa, Sisseton-Wahpeton Oyate Nation, Standing Rock Sioux Tribe, and Spirit Lake Nation. Those special and unique flags of those tribal nations are now permanently displayed in the courtroom as a symbolic honoring tribal sovereignty and respect for each of the state’s tribal nations.

MHA Tribal Chairman Mark N. Fox was the co-host for the event that brought together representatives from the five tribal nations of North Dakota. As an alumni of the UND School of Law and a United States Marine veteran, the occasion was one that touched the heart and spirit of the tribal leader as he spoke of the importance of such a unifying moment in the history for the tribes and UND. Chairman Fox first thanked all of the veterans who came to UND on Friday for the flag ceremony.

“For UND to commit to displaying our tribal flags in their courtroom shows respect and great progress. What an opportunity and honor it is for MHA Nation to be a premier host of this historic event! Hearing the flag song as the veterans were bringing in the flags made me think about how that sacred song came to our tribal people who now sing it all over the world since the end of World War ll. The song was brought over from the war overseas by two native veterans. The flag song is cherished by our people. My father served during World War ll, along with two of his brothers, so I know very well the story of the flag song,” said Chairman Fox. 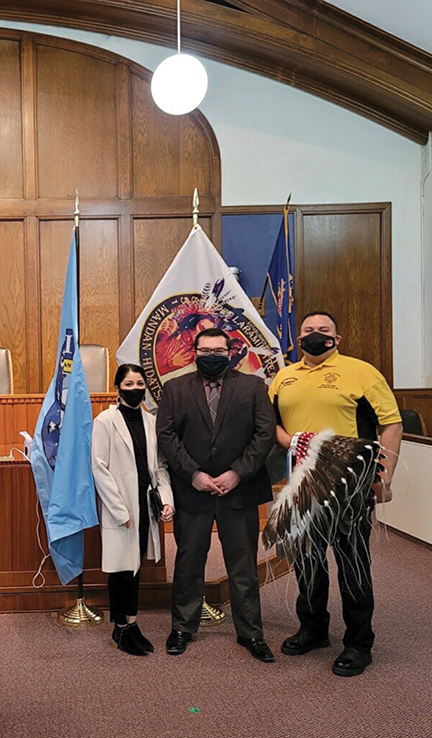 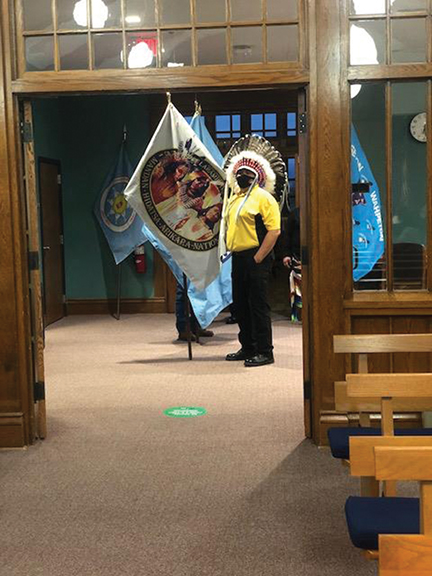 Turtle Mountain Band of Chippewa Vietnam veteran Richard Marcellais gave an opening prayer that called for world peace after the flags were posted.

Chairman Fox knows how hard law school can be to graduate from and he offered his encouragement to the students who attend the UND School of Law. Sheldon Standish of MHA Nation is a second-year law student and the treasurer for the Native American Law Student Association who welcomed the contingent of native tribal veterans and tribal representatives in the courtroom and others who were viewed the ceremony online via webinar.

Rob Carolin, Dean of the UND School of Law presented a statement on behalf of UND President Andrew Armacost who could not make the ceremony because of an unexpected personal issue that came up. That statement underscored the same thoughts and feelings that Chairman Fox shared about the respect and acknowledgment of tribes. Carolin also touched on recognition of the traditional lands of the indigenous people who lived in the Red River Valley and across North Dakota. In the statement, UND President Armacost and Dean Carolin both called the event a symbol of mutual respect and a “magnificent occasion”.

Chairman Fox received his juris doctorate in 1993 from UND School of Law and the memory of his graduation at Chester Fritz Auditorium with his family present is one of the most memorable experiences in his life. He further emphasized that attending law school at UND and serving in the US Marine Corps will always remain two major influential experiences that were life-defining for the tribal chairman.

“I chose to answer the call to serve in the Marines and I salute all veterans because they are truly the ones who will make America great again. The native veterans who represented their respective tribes at this ceremony bring great honor to me and all others who served,” said Chairman Fox. “I fondly remember going to UND law school, and although it was very hard at times, I can tell you that to get that degree was all worth it. I also want to recognize our MHA tribal member and law student Sheldon Standish for his words tonight and the Native American Law Student Association. I am greatly impressed by their work and I am grateful to UND for this event and its continuing commitment to provide quality education. This flag ceremony gives me hope for the future in a world where we are all related somehow.”

Chairman Fox concluded his comments by thanking two of his staff members, Lovell Overlie, MHA Public Relations Coordinator and Catherine Everett for traveling to UND to assist in coordinating the ceremony along with Robert Hunter, MHA tribal member and U.S. Army veteran, for the formal posting of the MHA Nation flag on his behalf.  Chairman Fox was also on the judging panel for the 29th Annual National Native American Law Student Association Moot Court Competition, a national competition that brings teams from law schools from across the United States to the UND campus. That competition was held on Thursday and Friday last week held in conjunction with the flag ceremony.

The flag song was sung by Thundering Bear, a drum group from the Turtle Mountain Band of Chippewa. The flag ceremony and event was sponsored by the UND School of Law Northern Plains Law Center and the Native American Law Students Association.