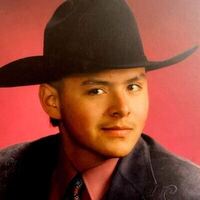 He lived his life growing up in New Town, North Dakota; Mandaree North Dakota; White Mesa, Utah; Crow Agency, Montana; Fort Totten, North Dakota, and Poplar Montana. As a young boy, he was always quiet with a big smile on his face no matter what time of day. His imagination had no limitations, and his interest in horses rose from his grandpa David Little Swallow. Newly grew up as one of many in Little Swallow camp with his grandma and grandpa working with horses and learning the ways of handling them.

Newly participated in school sports including basketball, football, and AAU wrestling. Because Newly was such a big, tall man, he was good at what he did. Due to his size, his heart was often mistaken. Once you knew him, you would know his heart is as big as the man he was. He cherished his children, his brothers, sisters, and every part of his family time. It showed in his passion for writing poetry that reflected his thoughts and love for family. Newly also participated in his traditional ways as a Men’s traditional dancer and attended local pow wow’s.

Newly graduated from New Town High School in 1995. After school, Newly’s interest was still in horses and learning/teaching others to ride and handle them. It led him to starting the Red Butte Bucking Bulls organization along with his brother Mike Young Bird. His interest was starting local youth rodeos for all the children to experience the joys of rodeo and the livestock. Mike YB and Newly began putting their bulls together and traveling to Crow Fair, Native Days, Local Calcutta’s and wherever they could get into. Eventually they traveled to the INFR in Las Vegas, NV. Newly was so amazed at the fact they were pulling their stock trailer down the middle of Las Vegas Strip. At one time or another, he rode all three categories; Bulls, Broncs and Bare backs….and always with a big pinch of cope. He was known for fighting in just his cowboy hat, boxers, and boots…ask Royce and Sha-Heggs.

He met and married the late Francine Azure, and two children were born: Amanda and Rosie Little Swallow. He also helped raise his stepdaughter Elyssa and stayed in her life even after their separation and after her mother passed.

Newly later married Barbara Little Bird, with whom he had three daughters: Kateri, Mariann, and Kara. Newly was also a stepfather to Eddy, Drey, Mitchell, and Ashlee.

Newly worked as a Director of Utilities for the Three Affiliated Tribes during his life. He made sure he was available any time day or night for families who needed graveside help or any kind of help for that matter. He held other positions at the Four Bears Casino, Jack & Jill grocery, and other various positions.

Newly loved fishing with his family; uncles, aunties, and cousins. He was always teasing or daring someone to do something. He loved racing horses in the open pasture to see who was faster. When someone was celebrating success in their life, he was right beside them. Even during hard times, he was right beside them, always talking to them and encouraging their decisions. He learned mechanics working alongside his dad, uncles, working on cars and other various machines.  Newlyn was always a risk taker and adventurous boy. Around the age of 8-10 years old, he rode his quad runner from the camp all the way to Mandaree to his Auntie Judy &Uncle Bobby’s just to get his saddle and riding gear. Meanwhile, his two older brothers were searching the countryside for him. He came riding home with his saddle and gear just so he could ride his horse.  This showed his passion as a young boy for his love of riding horse.