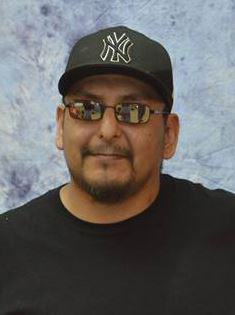 Avery Jorge Conklin carried the Arikara Name “Young Weasel”.  He was born in Stanley, North Dakota on August 1, 1978 to Aurelia Gillette and Dennis Conklin, Sr.   Avery’s education started out at the New Town Elementary School in New Town.  He then transferred to Mandaree in Junior High.  He received his GED from Fort Berthold Community College in 2002 with his best friend JD Finley as they did almost everything together.

As a youngster he enjoyed competing in sports.  He played Pee Wee and Midget baseball as a pitcher. Avery spent a lot of time with his dad and “tail” Billie Jo. He participated in Taekwondo tournaments locally and traveled to Canada and South Dakota.  He attained the rank of a Yellow Belt.  While in Mandaree, he played and lettered in Basketball.  During his adult years, he enjoyed playing pool and dart leagues.

In November of 2008, he met Kristen DeMarce and her daughter, Avery. He grew to love them both and took Avery as his own.  On October 5, 2010, his first born and one and only son Ayden Jorge entered this world. On May 7, 2014, they welcomed Arielle followed by Aurelia born on December 13, 2019.  Avery’s children meant everything to him and were his world.  Every day he continually told his children he loved them.  He would say ‘I love you so much best friend” especially Ayden Jorge.  No matter where they were, he made sure they knew.

He worked at the 4 Bears Casino & Lodge as a bartender for many years. In the spring of 2010, Avery began working as a brick laborer. He started with Green Masonry and helped build Elbowoods Memorial Health Center.  He then worked for Olheiser Masonry building the new high school, in 2011.  He also had a hand in building the new TERO building.

He was proud of all the completed projects he worked on. After the brick work was finished on each job, he continued working for various companies until projects were completed.  Avery loved doing brick work and laborer work, but due to back problems he was unable to continue in that field.  He also supervised Wildcat work in 2012 putting fracking sand into semis and worked at Alco.

Avery loved all the little ones in his life.  He was uncle to many and had a bond with each of them. Whenever he would see them, he would greet them and say he loved them. Avery was a one-of-a-kind true, loyal friend.  He was always there for his brothers whenever they needed him. They knew they could count on him.  His childhood friendships carried over into adulthood.

On Saturday, February 6, 2021, Avery Jorge Conklin, age 42, passed into the spirit world, from a hospital in Minot, with his soul mate at his side and his family close by.  Rest in peace our beloved companion, father, brother, son, nephew, uncle, and friend.