UND student shares her experiences as a resettled refugee

BISMARCK – Ranju Dhungana was born in a refugee camp in Nepal. She spent her childhood playing outside and being satisfied with the simple things in life. It wasn’t until her family came to North Dakota in 2009 that she realized having access to clean water, electricity and medical care could be expected, not a luxury. 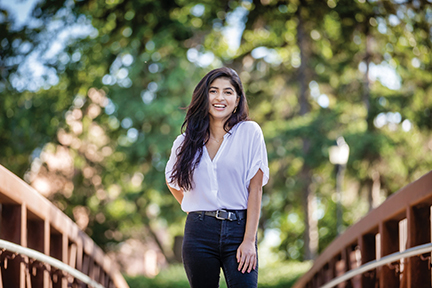 After being born in a refugee camp in Nepal, Ranju Dhungana moved to Grand Forks at age 11, graduated from Red River High School and now attends UND. Photo by Shawn Schill/UND Today.

Dhungana said adapting to the American way of life was one of her biggest challenges when she came to Grand Forks. As an 11-year-old, she was bombarded with new rules and norms: You have to follow traffic lights. You can’t hold hands with someone unless you are dating. Canned food is a thing and there is a ridiculous amount of it at Walmart.

While learning the ins and outs of this new culture, Dhungana was also challenged with keeping her own alive.

“I grew up being surrounded by individuals who spoke Nepali and had a similar culture to me, so I had a difficult time communicating with others,” Dhungana said. “Adapting was very challenging while also trying to preserve my own culture. I had to go from being a Nepali girl on the inside to an American on the outside.”

International refugees are vetted by the U.S. State Department before they are brought to the United States and turned over to Lutheran Social Services and other charitable organizations, which provide initial help with resettlement in states that have agreed to receive them.

Dhungana knew very little English before resettling. She said learning the language wasn’t that bad since she could study using books, television and music. She said it also helped that her teachers were patient and understanding.

“I remember getting books like ‘Diary of a Wimpy Kid’ and I would isolate myself from people and force myself to try to read the words,” Dhungana said.

Now, she is getting ready to graduate from the University of North Dakota with a psychology degree with a pre-health focus. The honors student is applying to medical schools this year. While she doesn’t have a specialization in mind, she has known for a long time that she wants to help others who are suffering.

Dhungana’s father died from a lack of anti-venom when he was bitten by a snake. She was only 6 years old. She said this loss has motivated her to pursue a medical career.

“After losing my dad, seeing the lack of medicine and seeing individuals die from preventable diseases, I knew that I wanted to go into the medical field,” she said.

Dhungana said she was disappointed to see that Lutheran Social Services-North Dakota had to close down and worries that new refugees will not have access to the same resources that she had.

“I was really sad because Lutheran Social Services has helped hundreds of people to resettle here and make their transition a little easier,” Dhungana said.

She hopes that the Department of Human Services will do their best to keep the program going.

While her community has been very accepting and treats her family well, Dhungana said she still sees racism and hate toward refugees on social media. She said that people forget refugees are humans who had to abandon their homes.

“Here’s the thing, no one really wants to leave their homeland and be resettled in a foreign place without knowing the language and social norms,” Dhungana said. “The majority of refugees have been forced from their homes or are escaping war and persecution.”

Dhungana’s parents had to flee from Bhutan due to ethnic cleansing. She said they had to build their own hut in the refugee camp, where they lived for almost two decades.

Dhungana wishes more people in North Dakota would be empathetic and open to those that need help.

“Back in Bhutan, they had their land, money, their home, everything. But they had to leave all of that,” Dhungana said. “I think people don’t understand that no one is choosing to leave their homeland.”