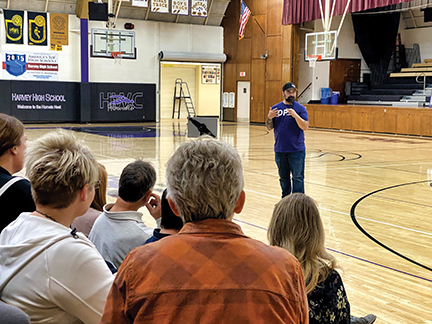 Adam Martin, executive director of the F5 Project, speaks to faculty and students at Harvey High School last year after a girl in the community died by suicide. Martin supports legislation before the 2021 Legislature aimed at extending opportunities for some convicted criminals to have their records sealed after their release to make it easier to find work and housing and otherwise rejoin society.

“I was in the third grade when the cyberbullying started,” she said. “I was added into a group chat that kids from my previous school were in. The first message was, ‘Why don’t you go kill yourself?’”

Gjovik, now a college freshman, testified in front of the Senate Human Services Committee on Feb. 9, in favor of Senate Bill 2311.

The bill sponsor, Sen. Joan Heckaman, D-New Rockford, said the bill would get mental health resources and information to students.

“It should be taught directly to students,” she said. “An assumption that, if the resources are out there, students will access them, seems a little thin.”

The bill also would allow for school districts to collaborate with other districts and provide instruction through virtual learning.

Heckaman said the bill was modeled after Gjovik’s personal experience as someone who didn’t get help at school.

The North Dakota Youth Behavior Risk Survey of 2019, the most recent survey conducted by the North Dakota Department of Public Instruction, suggests Gjovik is not alone. The survey showed 30.5% of high school students reported feeling sad or hopeless for at least two weeks in a row, an increase of 1.6 percentage points from 28.9% in 2017.

“That is telling right now we haven’t been going in the right direction,” Heckaman said. “This is very sad in the day and age that we live right now. There are plenty of things we can do.”

Gjovik said she hopes this bill can help students who face similar mental health issues as she did while in school. One way would be to make sure that school personnel notify parents or authorities when they believe a student is at risk.

When she was 14, Gjovik said, she had a friend who took his own life.

“I didn’t know how to handle [the situation],” she said. “If I had more information, maybe I could have saved my friend.”

Gjovik said it was difficult for her to tell her family about what she was going through. “I didn’t want to let them down or see me struggle,” she said, adding that she believes the proposed legislation would help educate children on how they can help themselves as well as learn how to help their friends.

Aimee Copas, executive director of the North Dakota Council of Educational Leaders, testified in favor of the bill and detailed how children are struggling today. Issues are often hidden, and “parents are not seeing what’s happening or coming,” she said. “One of the things our kiddos see, that we didn’t see growing up, is the pervasive use of social media.”

Copas said children absorb media, and to them it paints a very different picture of the world.

“Kids, they embody that and they may not tell you, and eventually it grows,” she said. “You pray when they have a breaking point they come to mom and dad, or go to a teacher, but sometimes they don’t and their breaking point is them doing harm to themselves.”

Sen. Judy Lee, R-West Fargo, and chairwoman of the committee, said stressors on children are exacerbated during the pandemic, “particularly if it is a struggling family, with other pressures like job cuts or losses. Kids are in a sense held prisoner in an environment that is dysfunctional.”

With students back in school, Lee said she believes the relationships between teachers and students are even more important.

“Teachers are likely to be a link that’s even more important than it was one year ago,” she said. “All those social contacts, in the best sense, for a kid who does have friends that are supportive — they haven’t been able to see them.”

Lee noted that a child died by suicide recently in Fargo. The child was an athlete and Lee said there was no reason for people to think there was an issue.

Emma Quinn, who left Fargo at 5 a.m. on Feb. 9, to testify in favor of the bill, also shared a personal experience with the committee.

“I started to struggle with my mental health at age 12, and started trying to take my own life at age 14,” she said. “It took me over 14 years to find the proper help for my mental health.”

As a mother, Quinn said, she now watches her own son struggle with the pressures of middle school, and she thinks education is the first step in helping children.

“The last thing [children] are doing is talking to their parents about their mental health,” she said.